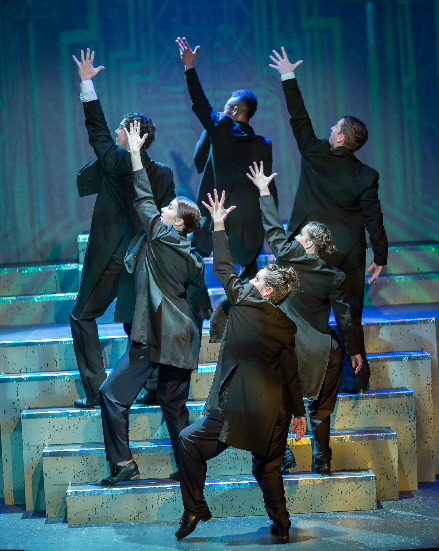 Time Step, the creative and original dance-centric revue at Broward Stage Door Theatre is a time travel tribute to tap dancing in all of its many guises.

The show was conceived and directed by Kevin Black, who teams up again with musical director Ben Bagby. The pair’s last dynamic duoship ran through March at Broward Stage Door in the same theater – the re-imagining of Beatles songs for Imagine – A Beatles Celebration.

Black, who runs his own production company and usually creates the choreography for his shows, in addition to directing and conjuring the concepts, this time credits the steps in Time Step to five contributors: Allison C. Scott and Sebastian Goldberg, who perform in the show, along with local choreographers Ashley Bachner, McKayla Cephas and Alessandra Torres.

Black, whose bio states that his first introduction to choreography and production came while working as a general manager at Norwegian Cruise Lines, has created more than a few memorable revue-type shows that fit so nicely in the smaller of two theaters at Stage Door. Like Imagine, and last season’s Ticklin’ the Ivories, which highlighted modern piano masters, the productions could easily translate to entertaining audiences aboard a cruise ship. And, similar to the other two revues of late, Time Step requires a small staging area, little more than a few costume changes, and, the must-have requirement: performers who ooze energy and charm.

That’s the recipe this follows and it’s what makes Time Step full of fun. While it needs a little tweaking here, and a little tightening there, what you get is a fast moving, enjoyable trip down memory lane.

About 15 song and dance numbers make up the first 45 minutes with those absolute tap standards “42nd Street,” and “I Got Rhythm,” plus the cheeky “Lullaby of Broadway” creating the rousing opener. Singers Sandra Marante and Matthew Staley, and the rest of the gang arrive on stage toting brown cases, meant to signal their arrival on the Great White Way. Dancers Goldberg and Scott, plus MacKenzie Cutcliffe, Stephen James Potter, Ariel Seidman-Wright, and Nathaniel Washington tap their way up, down and all around a set that’s made up of some narrow steps and, at top, a platform. Other staging areas include risers on both stage left and right that provide variety for the dance numbers, and serve as a way to break up what could become monotonous in a revue that works off of limited scenic elements.

Act One then speeds off to Spain for a flamenco inspired segment with Marante singing “Bésame Mucho,” and Staley accompanying her on acoustic guitar. Marante’s voice and song styling is filled with passion, which the famous bolero from the 1940s requires. She and Marante are perched on the top platform, as different dancers come in and out to perform flamenco variations, and, as the pace picks up with the hummable “Volare,” which had the audience singing along without any prompting, and rhythmic “Bamboleo”. Since some of the dance couples were stronger than others in this number, perhaps a better choice would be to use a single strong pair performing a more precise tango.

Sooner than the blink of an eye, we’re off to the grassy lands of Ireland signaled by a back-wall projection with video that rolls along emerald green hills and mountain terrain. Marante sings “Danny Boy” accompanied by Staley, and then he takes over to perform the Celtic song “Raglan Road.” Seidman-Wright hangs up her dance shoes for this Irish tribute, instead showing off her musical skills on fiddle. Of course, it should be of no surprise that the dancers arrive front and center for a Riverdance-inspired number.

To get the audience back in the traditional tap mood, a short reel plays footage of the incomparable tap legends, the Nicholas Brothers, in what Fred Astaire once called the greatest movie musical sequence he had ever seen. The clip is the pair performing in “Jumpin’ Jive” from the 1943 movie Stormy Weather, known far and wide for the Brothers’ unrehearsed, first-take, jaw-dropping acrobatics. Most likely, audiences won’t know the history of this clip, and its monumental importance in the tap world, so presenting perhaps a subtitle explanation, or creating some dialogue for performers to convey the tale might add an interesting, educational element.

The rest of Act One finishes off with the company performing from the 1940s swing era, “This Joint Is Jumping,” “It Don’t Mean A Thing,” “Jump Jive and Wail”, and “Sing Sing Sing,” and a spotlight on the show’s two strongest dancers, Goldberg in “That Cat Is High”, and Scott in “Tuxedo Junction.”

After intermission, the swift Act Two goes into a more modern mode with Marante singing with soul on Martha & The Vandellas’ “Dancing in the Street”, then moves into a Stomp inspired number, where the dancers accompany rhythmic sounds with brooms and buckets. It’s an inventive and fun touch, and the performers have a heckuva good time, as does the audience, with the syncopated sounds the dancers create with the props.

“Brooklyn Beat” gives dancer Washington the chance to show off hip-hop moves, and he steals the spotlight in this one, and deservedly so. And then, from New York to Nashville, so to speak, Staley sings and plays guitar on the country ballad “Castle on the Hill.” Things pick up quickly as a competition of sorts is sparked between guitarist Staley and fiddler Seidman-Wright as they challenge each other, and the dancers, to a fast-paced “Orange Blossom Special.” For the finale, the audience is whisked into here and now as the company dons sequined jackets (costumes by Jerry Sturdefant) for Justin Timberlake’s gotta dance hit “Can’t Stop the Feeling” and then segues into the Bruno Mars-Mark Ronson’s Grammy-winning single “Uptown Funk.”

Time Step heralds one of the most joyful and challenging forms of dance, and while the production could benefit from a cadre of strong dancers – the talent in the show is a tad uneven –the creativity and the company’s committed energy more than makes up for a few shortfalls.