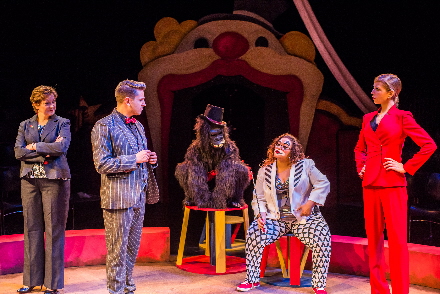 They are unlike any trials ever seen on Law & Order.

The judge is an antic gorilla dressed in a top hat and red tutu. The plaintiff is a trophy wife dressed like a demonic clown. The defense attorney does acrobatics on the stretches of drapery found at Cirque du Soliel. A young attorney is hectored by his mentor’s literal example to kiss the plaintiff’s posterior. And an attorney gives an eloquent summation while tightrope-walking with an umbrella for balance, circling the edge of a circus ring adorned with death’s heads.

Zoetic Stage’s world premiere of Christopher Demos-Brown’s Wrongful Death And Other Circus Acts is a hilarious but merciless satire on the civil legal profession by, indeed, setting the evening in and as a highly stylized circus.

Someplace between laughs, you realize that you and the crowd are vicariously delighting in this depiction of unvarnished unashamed moral bankruptcy. It forces us to ask whether we harbor, even envy such behavior.

There is nothing subtle as a devastatingly skilled attorney, who long-ago jettisoned principles as irrelevant, now chases the survivor of a plane crash as a career-capping case. Demos-Brown, a personal injury lawyer in his day job, excoriates less principled practitioners using a steamroller studded with razor blades.

The plot is a relatively simple if steely determined pursuit of the case and then the subsequent trial. Instead, the red meat of the play is how the late middle-aged veteran Laura Mendes educates her earnest young colleague Marvin in the dark arts of which she is a master. She constantly kneecaps his naïve protestations with snarky and cynical retorts.

What makes this land so solidly besides Laura Turnbull’s uninhibited performance is Demos-Brown’s articulate genius with words. Speech after speech is laced with passion, precision, wit and a knife-edged vocabulary all arrayed and parlayed smoothly to maximum effect. He has Mendes thrust blades in the gut and then twist them.

LAURA: Listen– you take a guy worth a couple hundred thou when he’s run down by a bus… kill the same guy in a plane crash– he’s worth two, three million easy.
MARVIN: That’s completely irrational.
LAURA: Exactly! We are allied with the medulla oblongata here. Irrationality is our friend. Plane crashes are talismanic for Christ’s sake– I mean… The long free fall contemplating fuck all. The…the… rapid decent to oblivion… Forty tons of
metal and flesh plunging from five miles in the air. Everyone thinks about that, right? It’s…it’s…
MARVIN: Talismanic, you said.
LAURA:  Yes! Yes! Atavistic….It’s horrifying. It’s the thing that lives under the bed. It speaks the language of our deepest dread. It is… GORGEOUS.
MARVIN: None of that makes sense.
LAURA: We’re not here to make sense of it. We’re here to make money from it. Jesus. And you don’t even gotta do anything. Describe a plane crash to a jury, they’ll throw money at you just to make you stop.

To appreciate director Stuart Meltzer’s role here, it helps to know a bit of history and to read the script. When the Maltz Jupiter Theatre hosted a staged reading a few seasons ago, it was funny and biting, but a straightforward play. It was Meltzer, Demos-Brown’s frequent colleague, who suggested pushing it into a surreal highly theatrical circus milieu both in setting and tone. Demos-Brown had injected humor in earlier plays but nothing like this.

So while the current script certainly embraces that new sensibility to a large degree, Meltzer has embellished it, infusing his staging with an almost profligate parade of visual and aural grace notes in a Fellini vein. It’s a courageous approach for aerialists Meltzer and Demos-Brown that teeters on the brink of “too much,” but never ever falls over. Instead, it feels like a solid plausible world on its own terms. 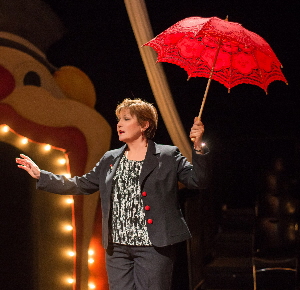 The production is blessed with a superb cast. Turnbull has only been seen sporadically locally in recent years although she has been one of the region’s leading actresses with a huge range, four Carbonell Awards and six other nominations. Despite a somewhat apple-cheeked maternal visage, she always invests her roles with inner strength. Her Laura revels in the lawyer’s hard-won skill at manipulation and a no-excuses-needed rejection of crippling niceties like ethics and compassion. The actress plunges into the darkness and emerges with an organic believability such as when she blithely bends her client over and smooches the woman’s tights-clad bottom.

Vanessa Elise has amassed an impressive resume including her Carbonell-winning turn as the hotel maid in Zoetic’s Clark Gable Slept Here. This may be her best role yet as the Cabaret-like narrator and emcee Death. Dressed in a bizarre costume and her face bearing the scariest clown makeup since It, Elise has the proverbial field day, playing with the audience, uttering a revival-like speech about an untrustworthy airplane part dubbed The Jesus Nut, and trading in her character’s Hispanic accent for a variety of voices as she plays other characters including the plaintiff. She roams around the stage, twirling and prancing like a clown whose playfulness doesn’t disguise an underlying menace. 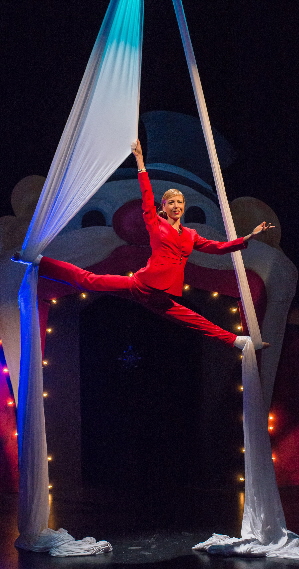 Autumn Kioti, a New York-based actress who appeared in many local productions under the name Autumn Horne, is just as convincing as the younger but just as pragmatic defense attorney Darla Van Beck. Reed-slender but with an expressive face, Kioti’s Darla is a force of nature, albeit one forged in an unforgiving world. Using her acrobatic training, Kioti is the one who makes her entrance contorting her body in the Cirque du Soliel apparatus.

Ryan Didato, another experienced local hand, plays the perpetually stunned Marvin who Laura keeps disabusing of his finer notions. Dramaturgically he has little to do but look aghast and express revulsion, yet Didato never makes you feel like it’s a one-note role.

The piece has a few flaws. Mendes/Demos-Brown takes every opportunity to disparage decent behavior and through the last quarter of the play it just seems like we’re beating a dead horse with a nail-covered baseball bat. What rescues those sections is that Turnbull is so good at the acidic rapid-response material and because Demos-Brown’s writing is such a satisfying joy in itself, sort of like watching witticism piled on witticism in The Importance of Being Earnest. The other flaw is that one character undergoes a 180-degree change in the finale that is not plausible from what we have seen previously.

Over the years, Zoetic has assembled a mix-and-match menu of outstanding creative minds. The fourth-rate circus motif is amplified by Michael McClain’s in-the-round set design, which has a dingy red and burnt orange big top, plus entrances made through oversized funhouse faces adorned with tiny skeletons and a plane crashing into one. It’s garnished by lighting designer Tony Galaska and Matt Corey’s scores of sound effects. But the highest praise goes to Angelina Esposito’s costumes, which range from the outsized almost frightening motley worn by Death to the subtle aspects of Laura’s business suit offset by clown red buttons and dark stylish shoes, which have bright red soles.

If the overall effect is that of that steamroller flattening any pretense of nobility, the moment-to-moment feel is an incisive scalpel-like dissection of human cupidity and one of the first don’t miss shows of the new year.

Wrongful Death And Other Circus Acts from Zoetic Stage as part of the Theater Up Close series performs through Feb. 4  in the Carnival Studio Theater at the Arsht Center’s Ziff Ballet Opera House, 1300 Biscayne Boulevard, Miami. Performances are at 7:30 p.m. Wednesday-Saturday, 4 p.m. Sunday. Tickets are $50-$55. Running time is 1 hour 40 minutes with no intermission. (305) 949-6722 or www.arshtcenter.org.

To read a preview feature about Demos-Brown and the play, click here.