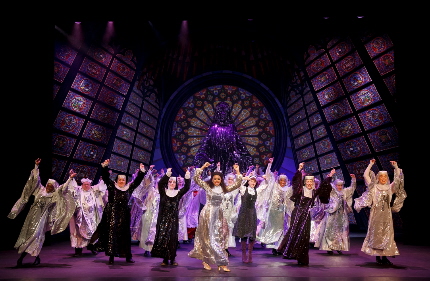 Let’s rip the Band-Aid off cleanly: Sister Act is not a terrible musical; it even has amusing and mildly entertaining passages. But the national tour at the Arsht Center is also a head-shaking mediocrity that begs an answer to why talented theater veterans wasted their time – and ours – on it.

The hilarious 1992 film, tailored to the gifts of Whoopi Goldberg, was transformed beginning in 2006 in multiple reworked editions that eventually opened on Broadway in 2011 and lasted about 500 performances.

But the result is a manufactured by-the-numbers manipulation that is proof that somewhere in the bowels of Times Square lies a step-by-step cookbook for staging a Broadway musical. The power ballad goes here, the production number goes there, this cliché here, that cliché there. Every major role gets a character-revealing solo whether it’s necessary or not, whether it slows down the show or not.

The bulk of the show is the classic fish-out-of-water scenario as Deloris seduces the nuns into living a more joyful life via teaching them how to sing R&B-infused gospel. She turns them into a Las Vegas-style chorus line, performing for the Pope in sequined covered habits. Such nunsense.

The music is by the ubiquitous Alan Menken, the lyrics by his Little Mermaid partner Glenn Slater, the original script by veteran Cheers writers Cheri and Bill Steinkellner with a doctoring by Douglas Carter Beane responsible for not so straight plays such as the hilarious The Little Dog Laughed and musicals such as the revival of Cinderella.

The biggest problem is that the movie worked solely because it had the literally inimitable Goldberg, whose hip yet hapless life force exuded a joyful in-your-face pride in not fitting in anywhere ever. (Side note: The Mother Superior was Hogwarts’ Maggie Smith). In New York, the lead was played by Patina Miller, an unknown pulled from the ensemble. Her song-and-dance talent and charisma carried the show and later won her the Leading Player part in the revival of Pippin. But Ms. Miller could not be Ms. Goldberg. The new Deloris is Beyonce temporarily fallen on hard times with a golden voice that makes it inevitable that she will prevail.

So much talent was connected to this show that what we see on stage is baffling. The staging is literally two-dimensional with characters either standing dead still and/or lined up next to each other in a single plane. The penultimate scene is a sloppily-executed, half-baked Keystone Kops mess that no high school drama teacher would claim. I checked the program for the name of the director. But the Playbill lied. It claimed the direction was by one of the modern masters of Broadway, Jerry Zaks. Impossible. Of course, he also needs to do penance for the Broadway run of The Addams Family.

Menken also is one of the most variable yet talented composers working. Although terminally infected by his pop success with Disney (some admittedly lovely tunes), his strength shining through here and on Little Shop of Horrors is penning inspired homages to period pop music. In this case, it’s the late 1970s deep into Donna Summer, Michael Jackson, Gladys Knight and the Pips, and receding memories of classic Motown – all delightfully honored and teased.

A standout number (the first in the show, 45 minutes in) is “When I Find My Baby.” The gangster sings a sort of Four Tops/Barry White number with three goons as backup, singing longingly about wanting to find his beloved Deloris — so he can disembowel her.

But Menken cannot resist generic predictable songs of self-determination and dreaming of the future and all the other required numbers on a Disney checklist including the “Be Our Guest” production number, “It’s Good To Be A Nun.”

They aren’t helped at all by Slater. He does seem have a bit of a snap when writing comedy lyrics born out of the collision of singing nuns and show biz. But his best are in a song from the preening hoods about to search the convent, talking about how their ladykilling talents will seduce the sisters:
Hey lady, don’tcha look askance!
Come on, say hiya to your love Messiah and don’t make me try a new advance.
Forget Jehovah, ’cause the wait is ovah.
Come to Casanova for romance.

The script does have funny lines from one of the three authors, such as the Mother Superior’s “If God does not strike this place down, he owes Sodom and Gomorrah an apology.”

This is Sister Act’s second national tour, this time with a non-Equity cast, from Troika Entertainment, a “thrifty” company famous for productions ranging the entire gamut of quality. They haven’t scrimped on the cast of about 22 nor on the increasingly glitzy nun’s habits originally designed by Lez Brotherston or the lighting originally designed by Natasha Katz, which is working overtime here. But their largesse stops there.

First and worst, the Broadway show used 16 musicians, the first national tour had 12. Only five musicians were in the Arsht’s cavernous pit: two keyboards including the conductor, drums, bass and lead guitar. Even accounting for the cutting edge sophistication of synthesizers and samplers, the sound of a heck of a lot more instruments came out of the speakers in the house. Sure enough, one of the musicians confirmed that the live music was augmented with prerecorded digital tracks. For crying out loud, why bother with live musicians at all? That’s sarcasm.

Then there’s the sets. We didn’t see the show in New York, but we’ll bet it had something more impressive than this assortment of backdrops and Goodwill furniture. Other than the set for the church with a huge statue of Mary, the entire thing felt as chintzy as a community college production and probably fits in a large U-Haul. It sure didn’t require the 10 semi-tractor trailers used by The Lion King.

The cast is serviceable. Kerissa Arrington played Deloris opening night and is sometimes spelled by Renée Veronica Freeman. Ms. Arrington started off slow but she grew in power and likeability until the crowd was rooting for her. Emily Kay Shrader made a fine shrinking violet nun who is brought out of her shell by Deloris and she nails her big power ballad, “The Life I Never Led.”

Maggie Clennon Reberg gave a nice spin acting the Mother Superior, but vocally she must have been having a tough night when the score went into her upper register. Kolby Kindle as the gangster was about as threatening an actor as my little sister, but he did have a mellow voice for his musical numbers.

Bottom line: With some witty jokes and the roof-raising gospel numbers, it’s almost impossible not to get caught up at some point, even if you can feel your buttons being poked at. But….

Sister Act runs through April 19 at the Ziff Ballet Opera House at the Adrienne Arsht Center for the Performing Arts, 1300 Biscayne Blvd., Miami as part of the Broadway Across America-Miami series. Performances are 8 p.m. Wednesday-Saturday; 2 p.m. Saturday; 1 p.m. and 7 p.m. Sunday. Runs 2 ½ hours including one 20-minute intermission. Tickets are $26 – $125.  For more information, call (305) 949-6722or visit arshtcenter.org.