The Last Night Of Ballyhoo Examines Prejudice Among Those Discriminated Against 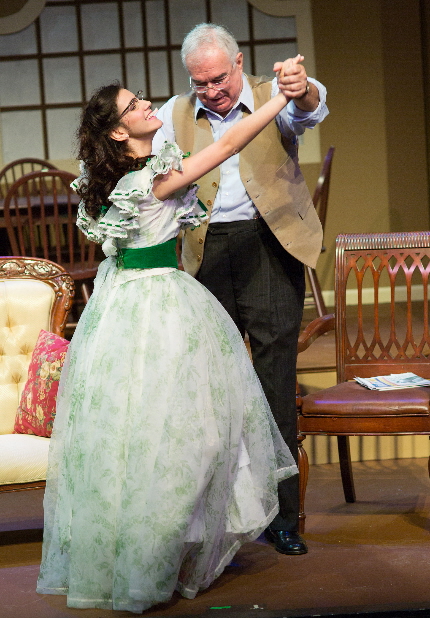 A scene early in Broward Stage Door’s production of The Last Night of Ballyhoo drops the temperature to Kelvin Scale cold.

A Jewish mother living in the well-to-do section of Atlanta in 1939 chides her brother for having brought home a young Jewish employee whose Brooklyn accent and straightforward manner contrasts with the home’s inbred southern gentility.

She says later to her brother in a manner so offhand that its unthinking tone is horrifying, “Adolph, that kike you hired has no manners.”

Even more than his tale of inter-racial relations, Driving Miss Daisy, Alfred Uhry’s 1996 play is an incisive dissection of assimilation at any cost in the face of ethnic prejudice, perhaps because of prejudice.

A solid cast molded by director Hugh M. Murphy adds Ballyhoo to the quietly growing list of solid productions that Stage Door has been accumulating in recent years such as its recent Twilight of the Golds.

To most Jews like myself, this factual depiction of prejudice promulgated by a people discriminated against themselves remains a stunning rebuke. It warns that the powerful human need to look down on somebody crosses all ethnic and religious boundaries.

Yet, Uhry and Murphy wrap this cautionary tale in a palatable family drama laced with copious humor and considerable compassion for frailty.

The tale centers on the Freitag household whose Dixie Bedding Company has bestowed a very comfortable income and a place near the top of the social strata in Atlanta, well, at least the Jewish strata in the rigidly anti-Semitic society at large. To continue to fit in over the decades, the family has become so assimilated that they celebrate a secular Christmas. Yet while they cannot escape their ethnicity, they have lost touch with the faith itself. When one Jew mentions Passover, a family member says, “That’s in the spring, isn’t it?”

The story opens in 1939 amid the local mania over the premiere of the film Gone With The Wind – and with newspapers headlines warning about Hitler’s invasion of Poland.

The home houses the unmarried patriarch Adolph Freitag, his widowed sister-in-law Reba and widowed sister Beulah “Boo.” Reba has a lovely well-adjusted daughter Sunny coming home for the holidays from Wellesley College. Boo’s off-kilter daughter Lala, who left college when she was mortified at being rejected by a sorority, is trimming the Christmas tree singing “The First Noel” and nattering on about the movie in a fiddle-dee-dee voice.

Much of the plot centers on Boo’s attempts to get Lala hooked up with the scion of Louisiana Jewish aristocracy, Peachy Weil, and the rest focuses on Sunny’s rocky courtship by Joe Farkas, the young man from Brooklyn hired by Adolph.

The young people have varying reactions about whether they can or will go to the big holiday cotillion for well-heeled Jews, Ballyhoo. A sort of unofficial competition to Christmas, one Freitag describes as “A lot of Jews in expensive clothes dancing around the country club wishing they could kiss their elbows and turn into Episcopalians.” That’s meant to be funny, but it’s actually truer than the speaker lets on.

None of this is, in itself, more than passably interesting, although the actors and director make you care about the fate of the people themselves.

But what Uhry has wrought is a stealthily compelling tale that works on two tracks simultaneously. One is the domestic tensions in the household rife with persisting jealousies and ancient baggage that makes co-habitation a prickly affair. In the quiet coda to a contentious row, Boo says to Adolph, without self-pity but with rueful accuracy, “I always thought we were going to be happy when we grew up.”

The second track is the prejudice, most overtly expressed by Boo but tacitly endorsed by the rest of the family against “the others.” What these Jews of German/Austrian origin mean by “the others” are Russian and Eastern European Jews who were often the more recent émigrés with rougher edges – people like Joe Farkas who grew up unaware of this second level of prejudice. Boo, who is jealous that the fast-tracking Joe is interested in Sunny not Lala, snipes that Sunny is “crawling to Ballyhoo with a New York yid trying to suck up to his boss” – precisely the kind of stereotyping slur the WASPy Atlantans might say.

Ballyhoo will never be considered a great American play, but it is quite well-constructed, multi-layered, a balance of pathos and comedy. Where Uhry has truly succeeded is creating complex characters and how they relate to each other. In this, he is well-served by this cast.

Stage Door veteran Miki Edelman just seems to get better with every role. Her Boo is not emotionally cold or intentionally nasty, but pragmatic dismissive of self-deceptive illusions. The social prejudice, the premature death of her ineffectual husband and the failings of her daughter have clearly stifled her joy of living. Edelman is especially effective portraying a woman who harshly scolds her daughter’s eccentricities and useless daydreams, but whose severity cannot conceal a desperate concern for the future of the girl she loves. Sounding like a sister to Amanda Wingfield haranguing Laura, Edelman delivers a truth-telling speech in which she predicts a bleak future for Lala – but we can see she is describing her perception of her own life.

Also impressive is Larry Kent Bramble as the avuncular Adolph. He’s been playing a string of aging Jewish men for a while now, but this one has an unusually authentic feel to it. Bramble’s Adolph may be blessed with a gently acerbic wisecracks, but he, too, has secret sorrows. His monologue about a missed chance at love – recalling a pretty girl on the streetcar in his youth – is an affecting portrait of the regret of loneliness.

With Murphy’s direction, these two pull of an especially difficult scene in the first act when Boo and Adolph argue heatedly about past baggage. It is done so convincingly and smoothly that you don’t notice that they have just dumped an immense amount of expository backstory into the flow – something lesser talents would make as obvious as wet sneakers rolling around in a dryer

Mary Sansone, who was a stunning standout in Stage Door’s A Shayna Maidel, once again creates a fully-fleshed out human being in Sunny from a part that is extremely difficult to keep from seeming too perfect. Sansone makes Sunny self-possessed without a shred of arrogance or ego. Yet, for someone who seems so well adjusted, Sunny emanates a kind of bemused sadness even before she delivers a speech underscoring how even these elitist Jews can never forget the price tag of being Jewish in a Gentile world.

The toughest part belongs to Greyssan Felipe portraying the flighty, high-strung odd duck Lala. It takes quite a while to realize Lala’s overheated fluttery and quirky affect is the character, not a shallow performance choice by Felipe. Eventually, it becomes clear that it’s probably a dead-on interpretation of Lala who is in thrall to the image of Scarlett O’Hara (even choosing a ridiculously over-the-top Scarlett-like gown for Ballyhoo). While laughable in her extremity, Felipe’s Lala is actually pitiable in the clear desperation running wildly just under her skin. Felipe convincingly puts across Lala’s jealousy that reaches a zenith when she accuses Sunny of stealing the spotlight of attention at Lala’s father funeral.

Alex Salup gives a credible portrayal of the standup charmer Joe who has his eye on the American Dream – a goal that has little patience for internecine bigotry. Janet Weakley is also convincing as Reba, not the sharpest blade in the drawer, but someone who has kept her gentleness intact despite losing her husband. Poor Stephen Kaiser has the thankless assignment of portraying Peachy Weil as a blithely arrogant, fatheaded boor whose inherited position in the entitled privileged class is all the funnier because, as a Jew, he will never be completely accepted in Christian society.