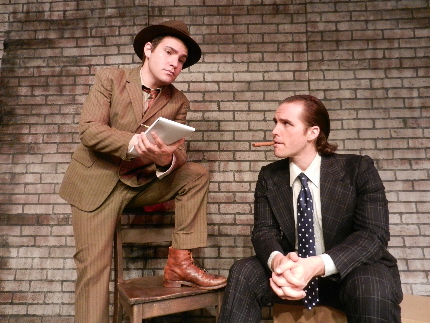 Island City Stage celebrates its tenth season with the anticipated Tennessee Williams’ Suddenly, Last Summer sidelined by the pandemic, plus a world premiere, a Charles Ludlam classic, a return of an earlier success and a contemporary play described as “an unflinching portrait of being Black and gay in America today.”

The Wilton Manors-based company focusing on LGBTQ themes in both drama and comedy has been continuing to produce work in recent months including streaming originally live performances.

This return of the company’s initial play is the true story of two actors who hired themselves out to the Long Beach Police Department in 1914 to entrap “social vagrants.”.

Racism, homophobia, eroticism and self-hatred seethe through this script. A “burning” is the undercurrent of this searing story in which the Armature Bar is at the epicenter of stories that connect two sexy, troubled gay men and a Black family whose matriarch is running for political office. Uniquely combining mystery and poetry.

Evoking themes of aging and beauty, hypocrisy, greed, sexual repression and cannibalism, the play is also the one that the author himself considered his most poetic.  On a hot, steamy afternoon Violet Venable and her niece, Catherine wage battle in a war that will cement the legacy of Violet’s son, Sebastian. Was he a brilliant artist, devoted son or sexual predator?

Vampire attacks, werewolf sightings, and the resurrection of an Eqyptian Princess all make an appearance in this hilarious send-up of gothic romance and horror films in which two actors and lightning-fast costume changes are the stars of the show. Charles Ludlam and The Ridiculous Theatrical Company were pioneers, elevating camp to an art form.

Three actors sit in an ethereal waiting room. At each performance the audience chooses which actor must portray the lead character in this uncompromising story of a Black man diagnosed with HIV. But whose story is it, really, as one of every two Black gay men will be diagnosed with HIV in their lifetime? How have these men been treated by the LGBT+ and Black communities? Through humor and pathos Donja  R. Love has written a deeply personal call to action and created an unflinching portrait of being Black and gay in America today.

All performances will be at Island City Stage, 2304 N Dixie Hwy in Wilton Manors. For more information and to reserve tickets go to www.islandcitystage.org or call 954-928-9800.

This entry was posted in News and tagged Island City Stage. Bookmark the permalink.