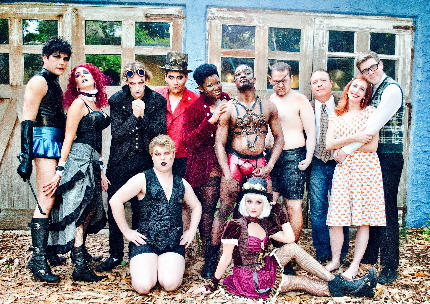 Meatloaf again? If, as the saying goes, the sun never sets on the English empire, it sure as hell doesn’t set without The Rocky Horror Show playing somewhere on the globe.

Although it seems ludicrous to critique something meant to be joyfully anarchic and way beyond any social norm like a theater review, even the tale of Rocky and His Friends can be considered in terms of other productions since the musical bowed in the West End in 1973. This one is a mixed glitter bag of strengths and weaknesses.

The underlying ethos is that this is not a musical, it’s an experience. Or at least this production is. The cast is out to have fun and it successfully seduces a willing audience that could care less that some people can’t sing and some people can’t act. But you can see it in the energetic performers’ beaming faces: The entire effort helmed by Evening Star’s Rosalie Grant is luxuriating in the show’s liberating theme of “Don’t dream it – be it.”

We won’t waste space on plot but for those who have only seen The Rocky Horror Picture Show (40 years old now), the original 1973 stage show is a marginally different animal, although over the years and endless revivals it has incorporated every image and beat of the wildly successful movie.

The impressive aspect of the Infinite Evening production is the use of computer-generated projections by Murphy Hayes such as those recreating the storm-assaulted mansion’s seedy interior and exterior. Even better were several video scenes shot by Chris Bare and Erynn Dalton for such scenes as Frank’s sexual encounters with Brad and Janet (nudity alert), the swimming pool finale and above all a dead perfect collage of snippets from the films mentioned throughout the opening number, “Science Fiction/Double Feature.”

But no matter what, this edition has (thanks to a fine sound system) a rousing digital soundtrack for the cast sing to with those witty lyrics and the irresistible “Let’s Do The Time Warp Again.” The high point of the show is Eytan Deray stepping in for Meatloaf with a blazing “Hot Patootie – Bless My Soul.”

On the downside (and you can laugh that we’re mentioning this as if we don’t get the point) is the production feels amazingly sloppy as if it was just tossed together.  For instance, while no one expects to hear Audra McDonald in these casts, some performers cannot sing to save their lives or anyone else’s, others have mediocre voices, but more telling, the few who do seem to have decent voices don’t bother to hit the right notes about 20 percent of the time.

Also, it’s probably heresy to utter this about the raw material, but the musical and the film deteriorate and sputter into an unfocused mess about two-thirds of the way through. This edition, in particular, flails around helplessly until the curtain call rendition of the ever-dependable “Time Warp” when the audience gaily accepts the invitation to come on stage and join the celebration.

The cast includes Dominick J. Daniel (the rapist in Abyss’ recent Extremities and the scummy husband in Bug) as a Frank-N-Furter who is less a sweet transvestite than a raven haired asexual David Bowie. Infinite Abyss founder Erynn Dalton is the comely Janet with Steven Michael Kennedy as the straight-arrow Brad (also serving as musical director). Seth Trucks is the mellifluous narrator, Christian Cooper is a sepulchral Riff Raff, Ireland Glennon is Columbia, Cindy Thargard is Magenta, Taurean DeVoe is an African-American Rocky (and the show’s choreographer), Greg Ward is Dr. Scott, and an ensemble of leering partygoers who sit on the laps of audience members in the front row or the aisles includes Daryl Fortson, Robyn Eli Brenner, Bobby Moore and Gracie Connell. But the standout is Deray who burns down the house as Eddie.

Of course, the other cast member is the audience. The company sells VIP seats in the front row as well as bags containing the required flashlights, squirt guns, newspaper paper and toilet paper. The evening kicks off with a “virgin sacrifice” for first-time attendees who must stand on stage and mimic an orgasm in the guise of celebrities like PeeWee Herman.

The show Saturday night was either (a) hampered (b) enhanced or (c) both by the incessant insertion of the traditional call-and-response from several audience members. Yes, you are supposed to fire back snarky rejoinders to actors’ lines on stage, but often, really often, the comments covered up the very line they were supposed to be satirizing. These comments are drowned out by the soundtrack when they are shouted in a movie theater, but they threaten to derail a production in a tiny venue like this one. And there are now scores upon scores upon scores of them, even during the songs you want to hear. This tail has begun to wag the dog.

If you can’t get enough, though, Infinite Abyss will join with the Lauderhill Performing Arts Center on Friday, Oct. 28, for a “shadow cast” performance with live actors mimicking every move projected on a movie screen from the 1975 flick.