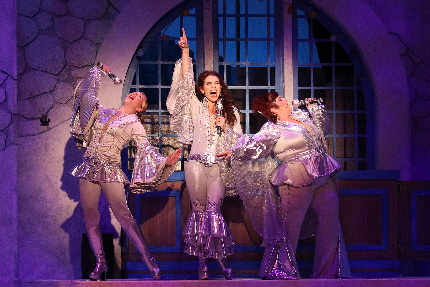 Mamma Mia! is another one of those Great Continental Divides in theater: you either love it – or you hate yourself for standing up and clapping along in the final mega-mix medley of infectious earwigs.

In repeated viewings such as critics have to endure, the raw material really is exposed as shallow, stupid, broader than a barn and not even a well-crafted piece of manipulative dreck. And yet, it is an undeniably effective often entertaining manipulative piece of dreck that you find your traitorous feet tapping along to and your spirit having a mindless or mind-numbing good time.

As proven by Actors’ Playhouse’s full-out production delivered by a band, crew and cast of totally committed performers with clarion voices, the damn thing can be a lot of good ol’ fun if you let yourself enjoy it.

You can’t ask for much better than veteran Jodie Langel blowing out the steel infrastructure of the auditorium with her blistering “The Winner Takes It All” or Jim Ballard throwing all of his considerable talent and skill into the unworthy vessel of “Knowing Me, Knowing You.”

Or Margot Moreland nearly stopping the show with her uninhibited plea to a prospective beau, “Take a Chance On Me,” or Mandy Striph razing whatever part of the building Langel didn’t with “Does Your Mother Know” as she is being aggressively romanced by an apparently gay suitor.

For the 47 people rescued last week from Antarctica Base Station 6 after being missing since 1999, Mamma Mia (don’t forget the exclamation point) is – if not the first — the quintessential juke box musical. The show takes various masterpieces from the art house oeuvre of the Swedish musicologists ABBA such as the unfortunately unforgettable “Dancing Queen” and shoehorns them in none too deftly into a script by Nobel laureate Catherine Johnson (or visa versa). Acknowledge that numerous musicals have done the same thing with Gershwin music, although Mamma Mia! is no Crazy For You.

Say what you will. As the 19th century saying that the sun never sets on the British Empire, in the 21st Century the sun never sets on a production of Mamma Mia! Wikipedia claims without citation that seven productions are playing at any one time. It was performed on the West End and Broadway thousands and thousands of times. Not counting the 2008 film which blackmailed Meryl Streep into a lead performance, the stage show has been seen at a minimum by 65 million people, including several hundred last season at the Maltz Jupiter Theatre. Local favorite Laura Hodos is playing it in Titusville as you read this.

In other words, it’s as popular as a musical theater show can get, so it’s doing something right, and Actors’ Playhouse’s edition certainly does. Virtually every review is going to use the word infectious – most in a good way, not as in novovirus.

Unlike the intentionally scaled-back chamber-version of Camelot coming up next, Actors has spared little expense including a 26-member cast (with two unseen pit voices), eight band members, an expansive set with rollout rooms, and a Kardashian-sized closet of costumes.

It helps that Langel, Moreland and Striph as Donna and her slightly aging Dynamos have all done their roles before, giving their work a polish and verve beyond what can be achieved in one show’s rehearsal period.

They get unstinting support from the men portraying Donna’s three lovers of 21 years ago: Ballard as the American architect, Ed Kemper as the Aussie travel writer, and Mark Sanders as the British banker whose Establishment exterior hides the “Harry the Headbanger” he was when dating Donna.

Winsome Meredith Pughe is a solid enough Sophie who carries more of the show than most people realize, although with her long blond locks it makes you wonder how she has the DNA to match Donna with a wild long mane of curly dark hair and three potential dads all of whom have similarly dark locks. She has a nice rapport with Drew Arisco as Sky, her intended husband.

Other than the bouncy disco numbers, these folks deliver the music with power and conviction as if they are singing Sondheim or at least Jerry Herman, much differently than the studio-massaged pop feel of ABBA itself.  (Side note: Did you realize that the lyrics to “Super Trouper” are being sung to a British brand name of spotlight? Look it up.)

People rarely look at each other; they spend most of their singing straight out to the audience presentation style as if they were doing opera, crooning in a night club or performing for the America’s Got Talent cameras.

Somewhere in all this, partisans might claim that there is a slight thematic string about looking back at the ripe old age of 38 or 40 on the choices you made in your youth and how little turns out quite the way you expected. Like that’s what you came for.

But deride it as you might, or I might, Actors’ Playhouse’s Mamma Mia! is inarguably what Kevin Bacon’s character in Diner called “a smile.”