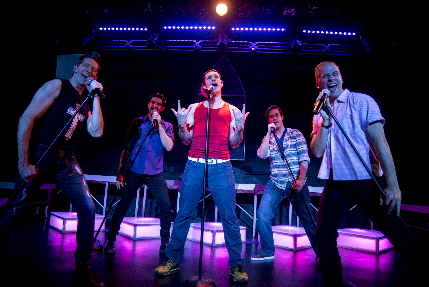 God “put it in” them say the members of Christian pop rock boy band, the titular Altar Boyz at Island City Stage’s silly hoot of a musical. / Photos by 84 Design

Franklin Graham, the homophobic alt-right son of Billy Graham, just finished a revival tour of Florida this weekend. Too bad he didn’t attend the revival of the musical Altar Boyz at Island City Stage that energetically, if gently, teases boy bands and evangelistic Christian pop rock by infusing a decidedly gay undercurrent. It would have driven him crazy.

This dictionary definition of a “hoot” will have most audience members grinning when they aren’t outright guffawing throughout the show’s two acts as five comely young men come to Wilton Manors on the final leg of their Raise The Praise tour to save souls.

Matthew, Mark, Luke and Juan – and Abraham (who wears a yarmulke with a six-pointed star) are saved souls themselves who found succor from their own demons – one was an alcoholic. Now, they want to altruistically share their discovery in explosively joyful songs with lyrics like “Jesus called me … on my cell phone / No roaming charges were incurred / He told me that I should go out in the world / And spread His glorious word.”

(Side note: In looking up lyrics online, I found there actually is a Christian pop boy band called Altar Boys.)

The earnest group exuding more wholesomeness than a Disney afterschool sitcom includes charismatic leader Matthew (Jonathan Furedy); Mark (Sahid Pabon) whose sexuality is only a secret to himself; Luke (Jarrad Biron Green) is the rap-obsessed and gang sign shooting recovering alcoholic who is none too bright, Juan (Brian Varela) is the Latinx hunk seeking his missing parents; and Abraham (Chris Robertson) is the gefilte fish out of water.

While only one of the five reclaimed souls on stage is clearly losing the battle to stay in the closet, you might suspect all of the characters have a sexuality found somewhere in the identity alphabet. Regardless, the charm of the show is that its satirizing enthusiastic evangelism is never bitchily critical of these zealots; indeed, it’s more a gentle smile at their blind earnestness.

But there seems to be a subtext that some of the loudest adherents of the mainstream religion that they revere is intolerant of sex, let alone homosexuality, or much of anything countering fundamentalist dogma. When one of the boys begins to tell their small town origin story, he says, “….and we evolved…” but is instantly shut down by a colleague with “Don’t say evolved.”

The underlying idea was conceived by Marc Kessler and Ken Davenport and given a plot-lite script by Kevin Del Aguila in which the boys try to save the souls of all of us in the audience. Their progress is reflected in an onstage computer video, the Soul Sensor DX-12, charting the decreasing number of lost souls in the theater as they perform, a gizmo they say was provided by Sony (the show makes fun of corporate support as the boys take advantage of product placement opportunities.)

But it’s the bouncy infectious music and wry lyrics by Gary Adler and Michael Patrick Walker that give the cast meat to gleefully chew on. The score is a perfect clone of the high energy beat-intensive ‘N Sync BackStreet ouvre, which is the crucial element to recreating the vibe of one of these inexhaustibly and impossibly peppy groups of young men singing about puppy love, mostly cleansed of any blatant sexuality.

The lyrics are witty (including copious under the radar sexual double entendres, gay and otherwise), but among the best is the paean to abstinence when Matthew recreates the love song he crooned to his girlfriend with a growing sensuousness,

In case you have any doubt about the subtext, imagine a lead in the ecstasy of another song, unconsciously bending over suggestively as the group exclaims,

God put the rhythm in me so I could bust a move!
God put it in me and that’s where it’s gonna stay!

Another favorite bit is “Epiphany” when Pabon as the clearly gay Mark sings a power ballad about not fitting in as persecuted kid, then making a life altering discovery of who he is. And then at the climax of the intro, he proudly announces, “I – am – a —— Catholic!”

The boys truly have solid voices so that when one sings the power lead in a song, the rest provide genuinely impressive harmony background vocals molded by Michael Ursua and Stephen Zumbrun, syncing them to digital music.

With a tongue-in-cheek sensibility, choreographer Andy Fiacco has given them virtually every synchronized, hip hop gyration in the boy band genre, all executed with knife-sharp precision, even having one of the boys carried off as if on a horizontal cross.

Rogow has kept this evening moving a steady clip and wisely keeps the actors from winking at the audience to acknowledge they know how broad and silly it all is.