POZ, Getting Its World Premiere At Island City Stage, Has Its Share of Positives and Negatives 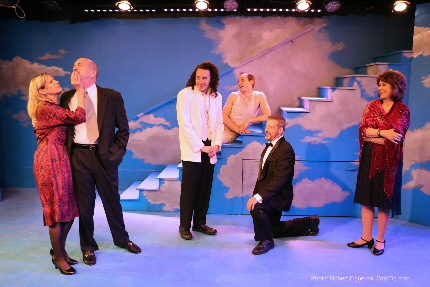 A legendary Broadway actress coping with debilitating asthma, a wannabe Broadway star with leukemia, an HIV-positive 50-something Log Cabin Republican who has slept with 10,000 or more men, a hippie lesbian who sees auras and angels, her ex-husband (a self-described theater queen who is best friends with the HIV-positive guy) and a dead ballet dancer who is now a ghost, all inhabit the world of POZ.

Michael Aman’s play is getting its world premiere at Island City Stage as the opening of the theater company’s 2014-2015 season.

Loaded with lots of laugh lines and inside theater jokes, POZ has some supremely likeable characters. You’ll root for whatever they toss at you during a multitude of vignettes (10 in the first act, 10 in the second).

The playwright, who possesses a doctorate in theater history, Dr. Michael Aman knows how to create comedy. Yet there’s just something a little bit too snappy about POZ. For all of its positives, it has one negative — it tries just a bit too hard, especially when it comes to convincing the audience that this lively cast of characters are real people with real problems. They feel paper thin and as airy as the sky blue of Michael McClain’s beautifully cloud-filled painted set.

Aman’s play takes place in New York City just two years after 9/11 and it tackles remnants of the city’s reeling after the terrorist attacks. It also presents a pre-Obamacare portrait of a health care system fraught with injustices. Was it just me or was I supposed to be convinced through the looking glass that health care in 2014 is so much better than where it was 11 years ago?

The main character, Edison (Pierre Tannous), his long dark hair with ringlets and a sweetly boyish face, is so earnest that people can’t help but want to scoop him up. He has leukemia, which makes him all the more sympathetic, and to add insult to injury, the non-working actor is a part-time waiter at New York’s Joe Allen and can’t afford to get cancer treatment.

After befriending actress Catherine (the oh-so-talented Jessica Peterson) they both end up sharing their health problem plights after they meet on the stairway of their Hell’s Kitchen apartment building. Edison finds out from Catherine that there’s a funded program that can help him.

When he arrives to speak with the social worker, he learns that he can only get the treatment if he’s HIV-positive. His solution? To sleep with a POZ(gay lingo for someone who has HIV) in an attempt to have unprotected sex. If he gets the virus, he can get treatment for HIV and get the leukemia taken care of at the same time.

Catherine takes a shine to Edison — she lost her friend, Arthur, to AIDS years ago and there’s a sense that if she can save Edison she can erase the guilt she still feels over Arthur. Lives intertwine, but it’s really kind of unclear how everyone all of a sudden is connected: The social worker named Oscar (Jeffrey Bruce) that Edison goes to see is connected to Catherine through Maia (Janet Weakley) and the POZ guy Edison selects from an online dating site, Robert (Larry Buzzeo) is indirectly connected to Maia who was married to Oscar. Small town, this New York.

In the second act, when Aman begins to merge his vignettes, there’s the hope that perhaps we can figure out how everyone has so conveniently cross-connected, but it’s as elusive as why Maia has been bestowed with her clairvoyant gift.

One of the most satisfying elements of POZ is the production itself: The ensemble is strong together and each actor defines their character. Aman has given all of them very specific identities to work with as described above: former theater diva, looney friend, angelic ghost, etc., with each actor going one step forward and building on the characterizations.

Peterson and Tannous are the standouts with Peterson winning the audience over in the first five minutes as she barks at the non-existent building’s superintendent (you may detect a bit of Lauren Bacall). There’s no doubt that this Catherine had a career in the the-at-er. She played Lady Teazle in School for Scandal and was a gender-bending King Lear. But her most notorious role that isn’t lived down for a minute throughout POZ — with plenty of callbacks — is the (fictional) musical Abe, in which she played Mary Todd Lincoln. When Edison finds the sheet music and performs Mary Todd’s showstopping song, it’s one of the high points of POZ, showing off Tannous’s wonderful voice, and Aman’s knack for inside theater humor (yes, he was able to find a rhyme for emancipation in a send up that’s highly reminiscent of something that would fit perfectly in Forbidden Broadway).

Weakley wears the character of Maia as comfortably as the floppy clothes Peter A. Lovello has her dressed in. She has shown her knack more than a few times (Shorts Gone Wild, for instance) at nailing a monologue and does it here again in a scene where Maia goes to see a shrink (Act One, vignette 6).

Buzzeo and Bruce are at their best when they banter as old buddies at a gay bar, reminiscing in Act One, vignette 7, about days gone by, but Buzzeo is not wholly convincing of Robert’s checkered sexual past. Christian Vandepas has one of the most difficult roles as Arthur, the heavenly soul who keeps comforting the living by delivering the message that life doesn’t end when one leaves Earth. Aman has him passing in and out of scenes, yet never really fully connecting with the other characters. The actor does so with a light as a feather approach and it works.

Director Michael Leeds is the foundation of this play — taking a script that is built on vignettes and finding a way to make each segment seamless. If not for the directorial talent here, the potential for POZ under less skilled hands could have been choppy. But Leeds moves his actors through the scenes at a solid pace which keeps everything consistent. When he’s faced with scenes merging in the second act, he navigates the challenge, keeping everything cohesive.

Applause, as always, to Island City Stage for its devotion to gay-themed works. Double applause when said troupe takes chances by offering world premieres and invites the playwright in to be part of the process. Offering more of Aman’s work (also he was in the audience Sunday night), for those who wanted to stay after Sunday’s dinner hour performance, Island City Stage presented his one-act Feeding the Bear about a middle-aged gay man dealing with body dismorphia — a perpetual negative view about one’s appearance, while dealing with some other challenges as he cares for his father who has Alzheimer’s disease. The comedy is based on a true story.

POZ in no way should be written off and its witty repartee makes it a crowd pleaser. With a bit more stage time and fine tuning, the play could very well become a staple for theaters looking for a gay-focused ensemble piece that will entertain LGBT audiences.

One Response to POZ, Getting Its World Premiere At Island City Stage, Has Its Share of Positives and Negatives