Posted on December 8, 2021 by Bill Hirschman 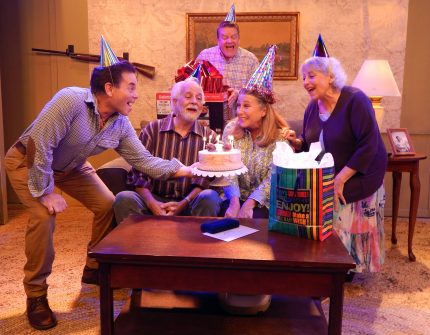 Few among us can resist feisty, foul-mouthed septuagenarians such as Helen Wheeler.

We find them funny because, well, we do not normally expect a woman in her 70’s to tackle with ease someone into submission, or use a blowtorch to free an inmate from jail.

In fact, we find two such people in Helen on Wheels, by Cricket Daniel. It is a delightfully funny and moving, sweet, but not syrupy peek into small town eccentricity. Specifically, Daniel has set the play during the present, in the fictional small town of Crocket, Okla.

To her credit, Daniel mostly avoids tired old jokes, stereotypes, and cliches. And she presents the serious and timely material with sensitivity. Without preaching to us, the playwright makes us stop and think about topics such as caring for an aging parent, as well as losing and mourning a loved one. As we pause, we might think of the Helens in our own lives (believe it or not, Helen Wheeler can be a relatable individual).

Helen on Wheels, which runs about two hours, including an intermission, is receiving an entertaining but uneven mounting by the Ft. Lauderdale-based, professional company, Pigs Do Fly Productions. The play runs through Dec. 19 at Empire Stage, which features three rows for audience seating. Indeed, you are so close to the stage, you are practically on it.

We humans tend to wear facades to mask how we truly feel inside. Helen Wheeler is no different.

More than two years ago, she lost her husband, with whom she spent more than half her life. She has not gotten over her loss (do we ever).

Perhaps, to hide her grief, she has developed a sassy, free-spirited, tough exterior. She spends her days playing Bingo, shooting up birds and raccoons, and downing many shots of alcohol.

Her sidekick, Zona, also a woman in her 70’s, keeps Helen company. Zona stands ready with binoculars and a blowtorch shouldHelen need help with anything. However, Zona’s assistance is not enough. In addition, Helen frequently calls on her son, Nelson, an attorney, for chores such as cleaning up after she shoots and kills birds. Nelson lives with his children in Tulsa, exactly 31 miles from Crocket.

When an older gentleman arrives in town, the local women instantly fall in love with him. But what is his real purpose in Crocket?

One of the acting challenges that Helen on Wheels presents is the ability to truthfully portray small town eccentrics without turning the characters into caricatures. This production’s cast achieves mixed results.

Beverly Blanchette shines as Helen. The performer injects her character with believable sass and a fun-loving, free-spirited demeanor. Blanchette looks at least 10 years younger than her character’s age of 74 (Helen turns 75 at the end). Blanchette’s gun totin’ Helen is also armed with a rebellious streak (think Annie Oakley), but the performer avoids making the character irritable or mean.

As Zona, Carol Sussman’s strongest point is her telling facial expressions. For instance, they vividly convey concern for and kindness toward Helen. But Sussman’s Zona lacks a believable rebellious streak. Actually, there is a hesitancy in Sussman’s expression. It fails to convince us that her character would do something as risky as use a blowtorch to free Helen from jail.

The female characters are better drawn than their male counterparts. In the script, Daniel describes the sheriff, Seth McGee, as “the Barney Fife type.” However, as the lawman, Steven Chambers mostly just scowls, wearing a facial expression that screams meanness and aggression. Also in the script, at least one character pinches the sheriff’s cheeks as though there is an overworked, yet cuddly quality to him. Unfortunately, that quality is absent from Chambers’ portrayal. Then again, perhaps Chambers’ thinking is that this sheriff is so overworked and underappreciated, he scowls and possesses a vindictive quality.

Perhaps, this officer feels like the community does not value him. Therefore, he wears a dark shirt and hat on which are written “sheriff” in big letters to boost his morale (there is no reference in the program to the person who designed the character-defining costumes). To his credit, Chambers softens considerably when he needs to, at the play’s end.

As Nelson, Todd Bruno projects a fun-loving, kid-like quality. It comes in handy during one of the lighter moments in the play. However, Bruno’s Nelson lacks a credible concern for his mother, although he seems believably overwhelmed.  After all, by his estimation, mom calls him five times a day for what she deems emergencies. Perhaps there’s a deeper reason why Helen calls her son so much.

Blanchette and Michael Gioia, as Elmer, are the strongest performers in the cast.
Gioia, with kind brown eyes and a fond smile, projects a polished, respectful aura as the gentleman who just moved to Crocket. Gioia’s Elmer is deftly understated and quietly affecting, while conveying affability and sincere concern.

Ardean Landhuis’s detailed and inviting set allows multiple locations to appear on stage without requiring much work moving scenery on and off stage.

When we arrive at the theater, there is no curtain. We immediately see Landhuis’ set. This draws us into the characters’ world. This is a smart choice by director Deborah Kondelik, who milks as much comedy from the script as she can. However, she places equal emphasis on the more serious, touching aspects of the play.

In the final analysis, Helen on Wheels is an upbeat, laugh-filled play. It will invigorate you, perhaps move you to tears, and make you look inward. The play is not groundbreaking. Even so, it offers a satisfying afternoon or evening at the theater.