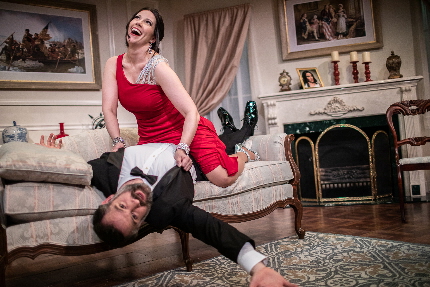 One thing theater does better than any other art form – even film – is comedy that portrays flawed all-too-human characters with a propensity for sparkling witty ripostes delivered with the deft skill and deadly accuracy of Olympic fencers.

The work of Oscar Wilde, Noel Coward, even the best Neil Simon spotlights people who say in the moment of an on-stage confrontation what most of us only wish we had thought of hours later when faced with the same situation in our real life.

Creatures with such quick wicked wit, who rarely let pass the opportunity for a pithy exit line, populate Rich Orloff’s Veronica’s Position in Island City Stage’s thoroughly entertaining production. Of course, most of them are involved in theater.

During a contentious rehearsal period of a doomed Hedda Gabler in Washington D.C., the fading movie diva Veronica Fairchild complains, “I’ve learned that the director serves the same vital function in the theater as the appendix does in the human body.” And later when trying to recruit a friendlier director, she assures, “Of course, you have a touch for Ibsen. He’s just like Tennessee Williams but without the sweat.”

When the production craters, her co-star Phillip says, “I overheard someone at the party say this was the biggest bomb he’d ever seen.” To which Veronica protests, “That’s one opinion.” Phillip tops her. “He happened to be the Secretary of Defense.”

But Orloff is aiming higher. Laid on top of this crisp banter is a comfortingly liberal tale about the collision of censorious politics, sexual identity and nose-thumbing art. Orloff’s goal is perfectly justifiable (slight echoes of Born Yesterday) although frankly it feels like two plays grafted onto each other. But it’s hard to object when each is executed with such flair and verve by this delight-filling cast helmed by director Michael Leeds.

Set in December 1989 through January 1990, we meet the vivacious Veronica (the simply divine Laura Hodos) trying to resurrect her flagging career with an understandably rare try at theater, since for the first time she actually has to memorize hundreds of lines. With her as the headliner, she is in D.C. with her long-suffering gay personal secretary Alan (Stephen Kaiser) – a tryout location that dovetails nicely since she is having an affair with the powerful Senator Harvey Johnson (Steve Carroll). He’d like to marry her – a situation that she sees as providing the security she needs as she ages.

Requiring a strong Eilert Lovborg, she has persuaded her twice ex-husband, the graying British matinee idol Phillip Wilder (Ben Sandomir) to join her — if he’ll stay on the wagon. She in turn is fighting to keep the calories off (She scrapes up errant crumbs of a scone torturing her on a tray). Review after review over the past two decades have noted the similarities of Orloff’s couple to Liz and Dick.

Into the mix comes a talented, insightful, lovely and slightly pretentious director Mallory Dascomb (Christina Groom) who likes to throw around phrases in Norwegian to impress folks, including pronouncing the title character with the authentic Scandinavian accent. Finally, Alan’s former lover, the Mapplethorpe-like photographer Ezekiel Barrow North (Jordon Armstrong), shows up to renew their relationship as he shows his controversial work in D.C. — to the fury of Johnson.

Needless to say, most of these folks exude sexuality, so trouble is inescapable.

As Johnson’s increasingly judgmental view of such art and homosexuality in general emerges, the decidedly apolitical Veronica is being boxed into deciding whether she can, should or must take a position – try as she might not to take a stand. No points for guessing where she ends up. Veronica says, “When I listened to Harvey’s speech tonight, and he went on and on about his vision of a perfect America, I realized that many of the people I care most about weren’t in it.”

This production has several virtues, starting with Leeds’ inventive staging that never calls attention to itself, plus his ability to get good performances out of average actors and terrific performances out of exceptional actors. He and Sandomir neatly pull off Orloff’s one major surprise in the show with martini smoothness.

This cast uniformly nails the script with the speed, dexterity and razor edge that Orloff must have dreamed of when it premiered in 1994 at Florida Studio Theatre.

Hodos, easily one of the best musical theater actresses in the state, never shies away from portraying Veronica as the classic self-centered vain pragmatist, yet her 11 o’clock turn is credible.

Kaiser makes Veronica’s running buddy a wry and devoted confidante who puts up with a huge rasher of grief out of his love her. Carroll somehow sidesteps Johnson being a monster so much as a genuine true believer of concepts the audience despises. Armstrong keeps getting better role after role, here making Zeke a genial foe who enjoys needling Johnson.

Groom is supremely capable of comedy as seen in various Shorts productions or drama as in her stunning turn in Gidion’s Knot. Once again, she invests her character with intelligence, zest and a slight aura of daffiness that any denizen of this world must possesses.

Special mention is due Sandomir who is best known here for musicals. But like Hodos, his comic timing here is as perfect as it gets while exuding a slight sadness of a character who also knows his prime may be behind him.

A nod to Natalie Taveras’ elegant DC hotel room design where you suspect much of your legislative sausage has been made. Prop mistress Denise Proffitt has provided a magazine on an end table for casual reading that has a faux feature story on its cover of the two leads prepping for Hedda.