Zoetic Stage’s Captiva is Incisive Look Inside the American Family

Posted on November 5, 2011 by Bill Hirschman 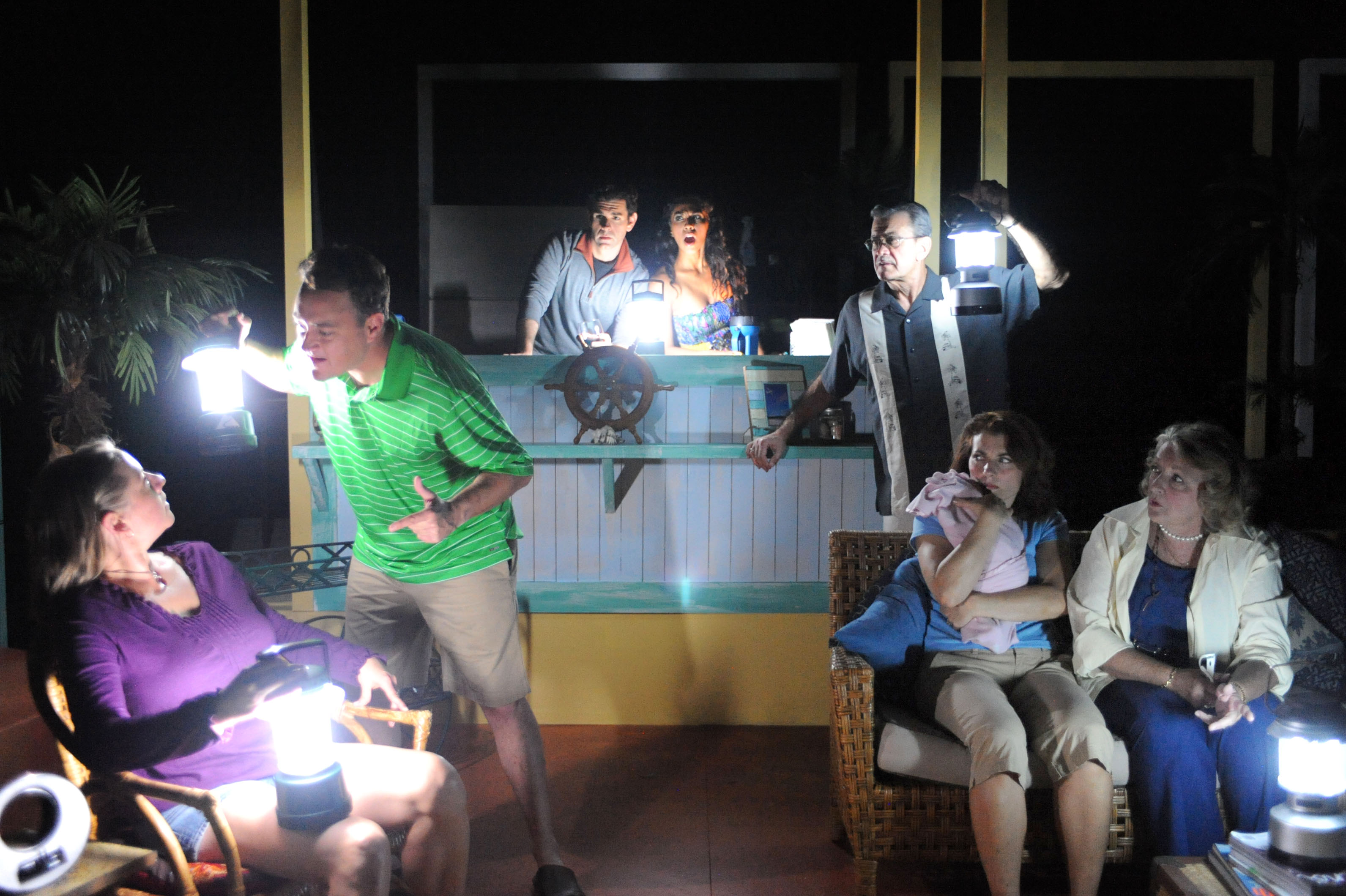 Home is where they have to take you in, the bromide goes. It’s also where they know how to eviscerate you with a look or a phrase drawn from unforgotten and unforgiven history.

Captiva is a brilliantly observed, finely etched portrait of the familial ties that bind in every sense of the word. It’s also one of the finest works we’ve seen in the strongest 18 months of theater this region has produced in recent memory.

Populated by hyper-articulate people with a credible addiction for wittily acerbic rejoinders, Captiva is laced with more belly laughs and guffaws than half the farces this year put together. But at its heart, Captiva’s not a comedy at all. It’s a serious examination of family dynamics.

The Cestar clan is not some operatically dysfunctional family of tragic losers like O’Neill’s Tyrones. This is an all too recognizable family of flawed human beings rounded by virtues and foibles. As with most of us, this family is not just a collection of people, but a not-so-safe harbor where shared experiences have forged alliances and friction that have sandpapered sensibilities raw. They know each other’s rationalizations and excuses so well that they don’t wait for someone to finish a sentence because they know the well-worn paths the comments will take.

After one meltdown, a remorseful sister tries to re-establish a connection with her brother after she has seriously insulted his wife.
MATT: She’ll get over it.
VALERIE: How about you?
MATT: I got no choice. I’m family. You can’t escape family.

The linchpin of the tale is Valerie, the youngest daughter who calls everyone together to the titular island beach house. But she is not the central character. The protagonist of this play is the entire extended family with its support and humiliation ebbing and flowing like the surf outside.

One of the triumphs of the script, the direction and the performances is the depiction of people who often talk around, over and through each other. The overlapping dialogue, the simultaneous conversations among different people in the same room is a schematic of the modern family’s difficulty in communicating. They talk a great deal, but they don’t listen very well except to pick up cues to riff on, and they hear even less. The technical skill needed by all parties involved to make the content of these scenes (a) believable and (b) comprehensible amid the cacophony is an underrated but outstanding tour de force.

This is the third ready-to-be-seen play written by Demos-Brown, a Miamian whose day job is as a lawyer. His first, Our Lady of Allapattah will bow this spring at the Caldwell and his second, When the Sun Shone Brighter made an impressive debut two seasons ago at Florida Stage, plus he has whipped up short plays for other causes.  But this has a different feel. Not to make more of this than it is, Captiva is akin in development to Arthur Miller’s All My Sons: Not the first work to be seen, but the one that announces the arrival of a mature sophisticated vision, a unique voice and honed skill.

Captiva’s plot is a homecoming of sorts as the Cestar family gathers where they spent what some of them now recall as idyllic summer vacations.

Val (Kati Brazda), is a 35-year-old California wannabe screenwriter who has summoned the clan to introduce them to her fiancé , due to appear at any moment. We meet the extended family in measured and digestible chunks.

First, there are her older brothers Matthew (Todd Allen Durkin), a harried middle-class businessman and blunt-spoken father of a newborn infant, and Luke (Nicholas Richberg), a genial but erudite university professor laboring endlessly to finish a book about the poet Wallace Stevens.

All three siblings are extremely bright; they correct each other’s grammar. But “Mattie” tries to cover his native intelligence with crude sex-drenched remarks that puncture any high-blown or serious discussion. Still, there is a warmth among them, demonstrated by the well-honed banter resulting from three decades of shared experience.

Then we meet Matthew’s wife, Nikki (Amy McKenna), a beautiful woman who has adopted the pragmatic dowdiness of an overtaxed mother of a newborn and who struggles to politely bear up with being an outsider in this tight clique.

Then there’s the matriarch, Emily (Barbara Bradshaw), whose cheery demeanor is a launching pad for judgmental pronouncements, all the more hurtful for her tossing them off with no thought for the damage they might do.

Scanning wedding dresses in a magazine, Val points out one to Emily. With condescending gentleness, she says…
EMILY: Honey– You need to be a little realistic.
VALERIE: About what?
EMILY: Sleeveless?
VALERIE: Why not?
EMILY: You have to have… you need very… young arms to wear a dress like that.

Whenever Emily lets loose with one of these little bombs, the siblings give each other knowing looks of commiserating recognition.

Later, Luke apologizes to Nikki for one of Emily’s jibes: “Don’t take it personally, Nik. She had her already shriveled sense of social decorum removed when she got her tubes tied.”

Last to arrive is their divorced father Tom (Bill Schwartz), an arch conservative product liability lawyer who punctuates his conversation with snorts, harrumphs and slurs. In tow is his new young wife, Teresa (Amy Ione Alvarado), a ravishing beauty who is not only Luke’s age but once shared a kiss with him years ago.

Emily is a verbal match for all of them. When Teresa tells Val, “Weddings are so… special, Emily mutters loudly, “Only happen two, three times your whole life.”

The play is not a narrative as much as a character study of a family dynamic. As a hurricane bears down on the island, a couple of major twists turn this warm familial sweater inside out. Old resentments percolate up through the muck and explode in a free-for-all of accusations and recriminations as the gale knocks out the power. When the emotional and physical storm reach their climaxes, played out in the light of emergency lanterns, the resulting devastation tests the sturdiness of the sinewy connective tissue.

Demos-Brown’s facility with language – both vocabulary and rhythm — is stunning. He believably and smoothly morphs commonplace dialogue into brief spirals of poesy and metaphor – and then has someone deflate it with a vulgarity because no one wants to get caught being pretentious.  Here, Luke is comforting his sister who is getting over a serious disappointment.

LUKE: But we still have all these beautiful old trees! Right? Still growing. Like they were designed to weather the storms. I think the hurricanes might even make them stronger. ‘Cause they clear all the weeds and dead fronds and the non-native crap out. And all that’s left. All that grows. Are the ones that really have a place.
MATT: (Entering) What’s up, girls?
LUKE: We were just admiring how beautiful the palms are and…
VALERIE: Luke was “consoling” me… positing the native flora as a metaphor for the resilience of love in the face of death.
MATT: Way to go, man.

Here is an aria by Mattie who tries hard to hide his complexity. But sometimes his depth of thought slips out, just without the metaphors.

MATT: What we are– ALL we are… Is a credit report. A couple thousand digital photos and some shit in a safe deposit box. Maybe if you’re lucky, an old picture of yourself you never really liked… hanging in the hallway of some… distant progeny… who describes you in heroic terms to his house guests… but gives the picture a glance once in a while with a set of eyes that look vaguely like yours when he passes it on his way to the bathroom to take a piss… and thinks: “Jesus I gotta get rid of that ugly ass picture one of these days.” Because deep down in there… somewhere… he wants to blot out the faint flash or mortality that flares every time he sees your face.

The only quibble is the audience is a little at sea when Val speaks to us directly about incidents that have or will or are occurring, apparently referring to herself in the third person. But there is a good reason for this, so bear with the theatrical conceit until the end of the play.

Again, this is a very funny evening replete with Emily’s malapropisms about the Taj Mahal and witty comebacks, my favorite being Luke’s “And thank you, Yoko.” You’ll have to see them in context.

Although every performer is pulling from a deep bag of tricks, the naturalistic acting is amazingly nuanced and skilled. Even newcomer Alvardo is totally believable. It would take another article to adequately praise their ability to master the dialogue and plumb the multiple levels of the script.

But Durkin surpasses virtually anything he has done to date, which is saying something when you consider that includes Thom Pain and Blasted. It’s not that he goes somewhere you haven’t seen him go before. It’s that he does it with a stunning amount of technique carefully smoothed over so it looks completely natural. His ability to express disbelief with a deadpan stare or a raised eyebrow is both deft and hysterical. Watching his frustration wrestling to piece together a folding baby crib is a hoot in itself.

Meltzer proves a fine ability to pace and orchestrate the madhouse, allowing for comic timing and dramatic silences. Demos-Brown could not have asked for someone more in tune with the material and able to get that vision on stage. He is especially deft in placing characters around the beach house. Even when two or three characters are having an intimate discussion, Meltzer often places someone else alone in another part of the house because there is always life going on in more than one corner of a family. There is another moment early on when the entire family is jabbering away in different conversations across the Florida room and Valerie is just sitting in its center, acting as our surrogate, soaking in the four-ring circus.

Especially effective is the moment, either Meltzer’s idea or lighting designer Patrick Tennent’s, to light the hurricane scene solely by the illumination of those fluorescent hurricane lanterns.

Sean McClelland’s design of the beach house is a series of house frames that we look through as if we were lurkers with X-ray vision. He uses the wide playing space in the Arsht’s Carnival Studio Theatre by adding patios as playing space on either side.

This production, the opener of Zoetic’s second season, is a compassionate yet clear-eyed, moving but not sentimental look at why families define that other bromide, can’t live with them, can’t live without ‘em. Don’t  miss it.