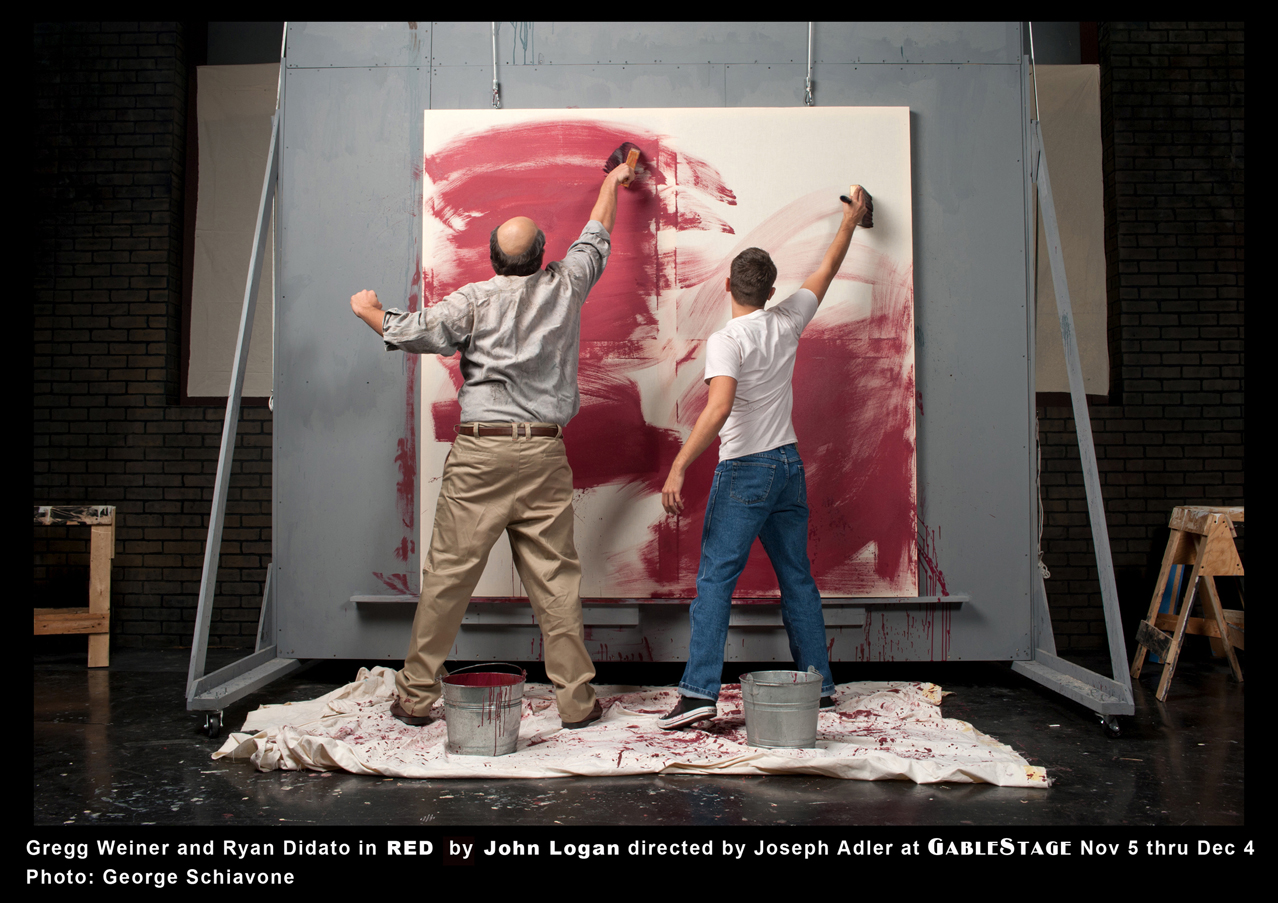 One of the few unspoken tenets of painter Mark Rothko’s cosmology in John Logan’s play Red is that creating art is the highest and holiest purpose of human life.

In GableStage’s fine edition, Rothko struts and strides across his studio giving his assistant and the audience what is essentially an 80-minute master class in an artist’s responsibility to that calling.

Actor Gregg Weiner as the curmudgeonly painter fumes, meditates and rages at a massive range of frustrations from the compromises of commerce to the intellectual laziness of most everyone who attempts to analyze his work.

“Tell me what you see,” Logan’s Rothko repeatedly commands his assistant Ken (Ryan Didato), insisting that the apprentice dig ever deeper, even after Ken makes a comparison of Rothko and Jackson Pollock as balancing poles of the disciplined Apollonian and freewheeling Dionysian facets of artistic pursuit.

Logan/Rothko’s flash flood of profound observations comes so fast and furious that audiences will be simultaneously fascinated and made to feel like sluggards for not being able to keep up.

Surprisingly, the production got off to an only adequate but not enthralling start for the first scene or two on opening night. You yearned for Rothko to be an instantly towering, intimidating volcano of barely reined passion.  Perhaps it was director Joe Adler’s choice, to give the characters somewhere from which to start their emotional arc.

But within 10 minutes, Weiner and Didato caught the fever under Adler’s deft, invisible direction, and the audience strapped in for the whitewater rafting ride of ideas delivered by two skilled actors.

Logan posits that aspiring painter Ken arrives in 1958 at the studio of the legendary abstract expressionist (a classification Rothko rejected) to clean brushes, prep canvasses and do odd jobs.  Rothko warns Ken, “I am not your rabbi, I am not your father, I am not your shrink, I am not your friend, I am not your teacher – I am your employer.”  Of course, during the two years that the play covers, he indeed becomes all of them.

Rothko is wrestling with a lucrative commission: to create four murals to adorn the walls of the Four Seasons restaurant inside the still-being built Seagrams Building in New York.

In the brick-lined studio, we watch Rothko and Ken hoist wall-sized canvases onto a huge easel. Each mural consists of a field of various shades of red offset or complemented by two dark vertical stripes of another shade of red. For Rothko, the precise interplay of the carefully selected hues of russet and rust is meant to evoke the pulsating quality of life itself.

Over several scenes, Rothko holds forth in mild musings and raging tirades about art. One of Weiner’s major accomplishments is that he creates a Rothko who is not consciously trying to teach, but merely unable to prevent these thoughts from escaping his pouty lips. As a result, Weiner never makes us feel like we’re being preached at while stuck at an art lecture.

Over time, Ken becomes more articulate, incisive and rebellious under Rothko’s cross-examinations until he matures, ready to become his own artistic entity.

Weiner continues his string of accomplished portraits here with this mercurial creature far different from the cheating husband in last season’s Fifty Words on the same stage.  Even with the courageous act of shaving his head, Weiner seems about 10 years too young for the role, but he skillfully makes Logan’s dense concepts instantly comprehensible to the audience .

Didato, who was far less impressive in Speech and Debate for GableStage, is  convincing as the awed acolyte who finds the backbone to point out the master’s hypocrisies and shortcomings. Didato shines in the scenes in which Ken challenges the Rothko’s pronouncements (such as dismissing the young upstarts Warhol, Rauschenberg and Stella) or the possibility that the Seagrams commission is a sellout. Didato invests these with a primal passion missing from much of the rest of the play.

To say this is a talky play is an understatement and Logan wisely breaks it up with a set piece of unrestrained silent action: Rothko and Ken prime a canvas with a plummy undercoat in a furious competition and collaboration of slapping paint across a frame.

Red is likely the most produced new play in regional theaters this season (the Maltz Jupiter Theatre plans it for February), partly because of its quality script and its two bravura acting parts, but also because it’s an inexpensive show to produce with two actors and one set.

But the GableStage production underscores its worth as a journey into the very marrow of creation as Mankind’s attempt to produce something infinite and eternal.

Side Note:  The show plus talk back sessions are being presented several mornings to Miami-Dade high school students. 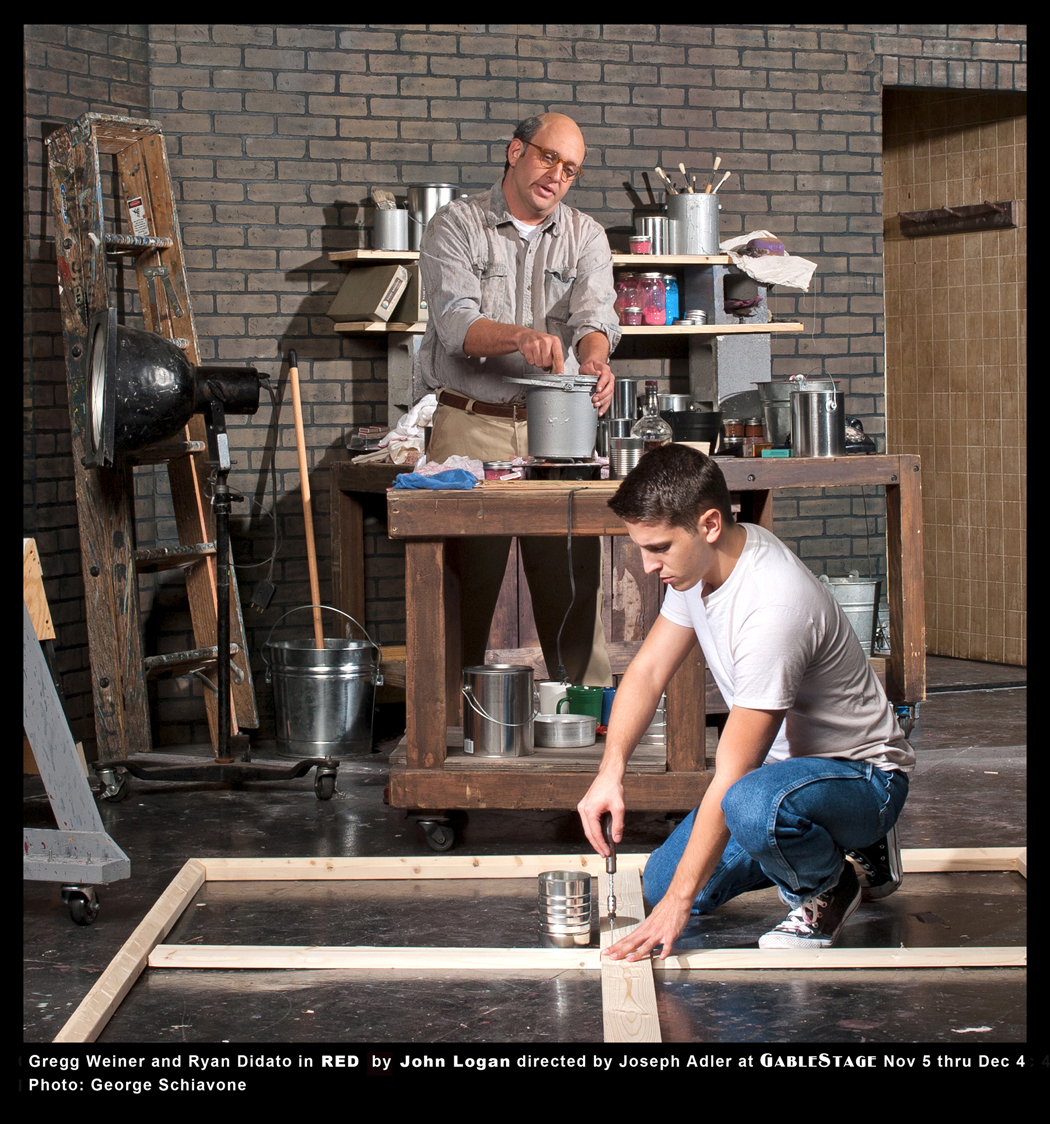