“Blasted” is the big winner at the Carbonell Awards 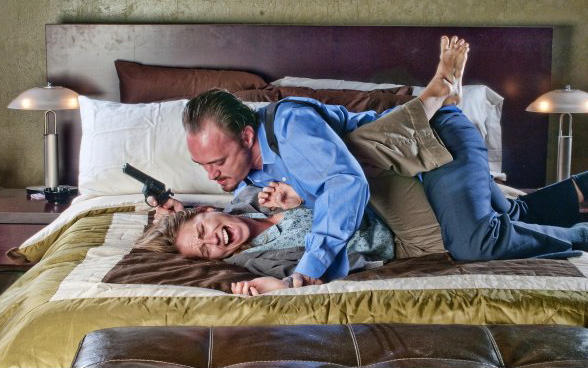 Sarah Kane’s blistering indictment of humanity’s proclivity for violence won awards for Best Production of a play, Scenic Design, Lighting, Sound and the seventh Director’s award for Joseph Adler who had championed a work that encompassed murder, rape and cannibalism.

‘We didn’t have a single walkout during the show. Of course, there was no intermission,’ Adler said, after thanking his board of director for supporting his controversial choice.

Adler brought up with him his stage manager and crew who had made a stunning transformation of Tim Connolly’s generic hotel room that is bombarded into rubble in the middle of the play ‘ in total darkness.

The musical awards, often a sweep for one show, were spread among Actors Playhouse’s epic production of Miss Saigon (which brought David Arisco his ninth Directing award) and three shows from the Maltz Jupiter Theatre. But the surprise of the evening was the winner of the Best Musical honor: Broward Stage Door’s revival of Jerry Herman’s cult show about movie pioneers, Mack and Mabel.

Stage Door, a primarily non-Equity theater in Coral Springs that uses canned music, has fought a reputation for wildly varied quality. But in recent years, it has surprised many critics and audiences with strong productions of A Little Night Music, The Drowsy Chaperone, The Light in the Piazza and Mack and Mabel.

The awards recognize excellence in professional South Florida theater during the previous calendar year. The number of superior nominees in several categories this year such as Best Actress in a play was unusually high, reflecting what is generally agreed to have been a far better than average year for quality work.

Barbara Bradshaw, one of the most popular actresses in the region both with audiences and colleagues, took the Best Actress award in a play award for her aging writer in the two-hander Collected Stories at the Mosaic Theater in Plantation.’ Bradshaw had won the award last year as well for her demented mother in the surreal Why Torture Is Wrong, and the People Who Love Them at the Mosaic ‘ one of several dotty or daffy parts she had aced in the previous two seasons. But her work in Stories, especially a respiration-stopping reverie about a former lover, exposed newer theatergoers to her gravitas and dramatic chops.

Gregg Weiner won the Best Actor in a play award for his emotionally tortured’and torturing — husband in a disintegrating marriage in GableStage’s Fifty Words.

In his profane acceptance speech, he thanked his co-star Erin Joy Schmidt for helping him find dramatic depths that he never could have reached on his own.

Tari Kelly won the plaque for Best Actress in a musical, Maltz Jupiter Theatre’s Anything Goes, but she couldn’t pick it up. She is understudying Sutton Foster in the Broadway revival of the show. Herman Sebek did fly in from New York to pick up the Best Actor in a musical award for his turn as The Engineer in Miss Saigon.

Christopher Demos-Brown, a Miami attorney with a growing body of plays, took the Best New Play award for his script to When the Sun Shone Brighter. The drama that debuted in May at Florida Stage depicted Miami-Dade politics’ intersection with the Cuban-American experience featuring a charismatic central character reminiscent of Marco Rubio. Demos-Brown is one of the founders of Zoetic Stage, a Miami company of actors, directors and writers created last fall. His play Wrongful Death is slated for a world premiere at Zoetic later this year and his Captiva will have its world premiere in December at Florida Stage.

Demos-Brown thanked his family first, but then gave praise ‘to all the Miami-Dade public school teachers who taught me how to write.’ Then he thanked the staff at Florida Stage: ‘The three sweetest sentences I know are: I do, it’s a girl and let’s do your play.’

The Best Ensemble award went to Maltz Jupiter Theatre’s season opener 12 Angry Men, a seamless polished work led by Steppenwolf director Frank Galati. The cast only had one South Florida actor, Barry Tarallo (although six were from elsewhere in the state) and the meatiest parts went to actors from the Windy City, but the lack of name and face recognition fueled the Everyman anonymity that made the play feel universal. It was especially satisfying for the Maltz which has built its reputation on lushly-produced musicals rather than straight plays.

The Best Supporting Actress in a play award went to Deborah L. Sherman for her Orthodox Jewish lactation consultant in Florida Stage’s Goldie, Max & Milk. Sherman, co-founder of The Promethean Theatre, told a crowd of people who felt out of place growing up, ‘This makes up for sixth grade!’

The ceremony was produced and emceed this year by actor/playwright/designer Michael McKeever and directed by Stuart Meltzer, both helming the show for the first time. They kept the show an intimate locally-focused industry night with a small musical combo rather than the public extravaganza with celebrity guest stars of past years, a format that had alienated some people in the theater community. The only presence of an ‘outsider’ was the presentation of the Best New Play award by television star Sharon Gless, a Miami resident who endeared herself to the community during her appearance in GableStage’s A Round-Heeled Woman this winter.

Gless noted the camaraderie of the theatrical community was evident in the raucous cheering and catcalls from the audience. Even people who lost in categories led standing ovations for the winners.

Unlike the sanitized Tonys and Oscars, the evening was joyfully punctuated with uninhibited profanity, double entendres, single entendres and references to serious pre-show drinking.

The show opened with a parody written by Maribeth Graham about the previous season called Getting It Together. A reference in the song to the exposure of the private parts of actors Todd Allen Durkin and Cliff Burgess in previous shows led to an impromptu running joke among presenters and winners that you wouldn’t see at the Tonys or Oscars.

The awards were broken up with numbers from the nominated musicals including Shane R. Tanner performing Movies Were Movies from Mack and Mabel, Mark Jacoby signing Song on the Sand from La Cage aux Folles, Corey Boardman singing My Father from Academy, Eileen Faxas (who drove in from the national tour of Mamma Mia) singing As We Stumble Along from The Drowsy Chaperone, EJ Zimmerman and Amy Miller Brennan singing I Still Believe from Miss Saigon.

As usual, the event dubbed ‘theater prom’ by the professionals, was a chance to dress up in tuxes and gowns, walk a red carpet, catch up with colleagues they hadn’t seen all year and dish. Local actor Avi Hoffman wore white tie and tails with a white top hat and white sneakers.

Like many awards, the Carbonells are both sought after and dissed. Many in the theater community hate the concept of competition; others argue that nominees’ work can’t really be compared to one another fairly. At the same time, most theaters send out news releases and place advertisements in their programs trumpeting the total number of nominations and later their wins. And few people have been caught hocking the original egg sculptures by Manuel Carbonell or the clear plastic awards that have replaced them.

The Carbonell board of directors has five special awards that are not given out every year, but which recognize long-term or outstanding service to the arts community.

This year, the George Abbott Award for Outstanding Achievement in the Arts ‘ the highest honor given at the Carbonells ‘ was presented to Patrice Bailey, dean of theater at New World School of the Arts in Miami since 2002. Many of the actors present at the awards are New World grads and cheered her speech.

The Ruth Foreman Award, named for the pioneering theater producer, was presented to the Broward Center for the Performing Arts, which is celebrating its 20th anniversary.

Best Production of a Play

Best Production of a Musical