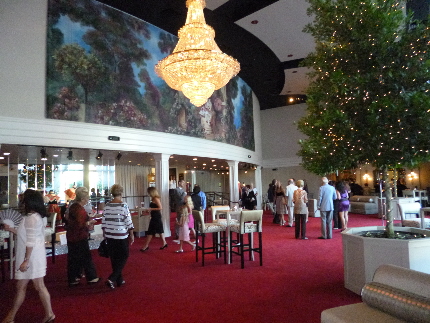 The transformed lobby of The Wick Theatre

Beneath the mirrored walls at the new Wick Theatre, beyond the faux trees lit with strings of white lights, the massive Rococo mural of a pastoral French scene, the huge gauzy drapes pulled back from the two-story picture window as if unveiling a new show, beyond the studied elegance, the basic shape of the lobby reminds everyone who built this building.

But the ghost of the Caldwell Theatre Company is not a specter that the Wick family wants to exorcise; they want to embrace it – and its clientele.

To that end, the guest list at an open house Tuesday included about 200 former Caldwell patrons seeking a peek at what the Wicks have wrought ahead of the Sept. 19 opening night of the maiden production, The Sound of Music.

“We want to honor the Caldwell,” said Kimberly Wick, executive vice president and daughter of the theater’s founder, costume impresario Marilynn Wick. “We want to welcome the Caldwell (patrons) back to the family.”

For a photo tour of the new facility, click here.

The feedback from Caldwell patrons and the community in general has been encouraging toward reopening the Boca Raton building on Federal Highway, the Wicks said. Even local theater legend Jan McArt has volunteered advice and she was among the crowd of well-wishers Tuesday night.

One concern the family has heard is some theatergoers want to see more straight plays like the Caldwell produced before it closed in April 2012. Their current season only offers Steel Magnolias. But that may be possible in the future, Kimberly Wick said. “You have to walk before you can run.”

Much like McArt’s former Royal Palm Dinner Theatre, the new company’s fare is decidedly mainstream musicals with name recognition. It aims squarely at the older patrons who formed the core of South Florida theater audiences for three decades. The titles include White Christmas, 42nd Street, Ain’t Misbehavin’ and the season opener, The Sound of Music.

“Everyone (in the theater industry) told us that Sound of Music was what we had to open with,” Kimberly Wick said.

But it’s been a tough sell to a wider audience, Marilynn Wick said. “I deal with young people all the time in my costume business. But when I say to them Sound of Music, they say, ‘What is that?’ ”

But Wick’s business plan does not rely solely on full houses to turn a profit. For three years, she has taken key pieces from what she bills as the largest costumer provider in the country and put them on display in Pompano Beach as the Broadway Collection Costume Museum featuring original wardrobes from famed productions. Busloads of tourists, condo groups and civic clubs from across the state have made the collection a major success. She is installing the museum in the back third of the Caldwell building where work is racing for a Nov. 5 opening. The plan is for the theater and museum to create a synergy in which each attracts business to the other.

Gilding the tour is cabaret entertainment and luncheons in the former Founder’s Room. The space is now decorated to look like the Tavern On The Green in New York’s Central Park with features bought from the restaurant when it vlosed in 2009. On display or in use are a chandelier, silverware, crystal, china, coffee urns, candelabras, even a silver stag from the restaurant.

Another revenue stream is expected to come from a gift shop, the former Caldwell business office, offering theater memorabilia as well as gelato and cupcakes at intermission.

The 5 ½-month process transforming the building has been far from easy and almost everyone’s optimistic pronouncements Tuesday had a bit of hold-you-breath quality to them.

“We’re green, but we’re learning fast,” said Kimberly Wick.  She and her mother have been upfront that they do not have the hands-on experience of running a theater company.

“It’s been a real eye-opener,” said Marilynn Wick. She acknowledged that as a businesswoman, she was caught by surprised that an Equity contract with an actor is not ironclad – that an actor can leave if they get a better offer, she said.

The renovation has encompassed surprises including a greater need for upgrading the lighting and sound system. There have been key personnel changes since the spring and Marilynn Wick’s detailed oriented management style has been criticized by some detractors. The company still needs to find some key players including an artistic director to guide the theater end of the business.

But Tuesday night, the vision of Marilynn, Kimberly and daughter Kelly Wick of a “classy” venue was visible in three dimensions. The Caldwell had an understated elegance. The Wick has a more showbiz vibe. A royal red carpet in the lobby matches the auditorium’s velvet-like show curtain surrounded by a gilt proscenium. Costumes from Wick’s collection are displayed throughout the lobby, even on ledges built above the crowd. Plush tall-backed armchairs are placed in circles in the middle of the lobby for people to mingle. The entrance to the men’s and women’s bathroom (yes, that mirror is still in the ladies room) is dominated by a larger-than-life photo of four actors strolling through Jerry Zaks’ revival of Guys and Dolls. On the opposite wall are numerous plaster life masks of famous film luminaries with plaques daring you to identify them.

An upbeat mood suffused Tuesday’s reception that featured actors on a small stage in the lobby singing hits from each of the shows in the upcoming schedule. When they closed for the finale, even guests joined in as lyrics bounced off the mirrored wall and back to the glass picture window,” Come on along and listen to the lullaby of Broadway.”

This entry was posted in Features and tagged Kimberly Wick, Marilynn Wick. Bookmark the permalink.