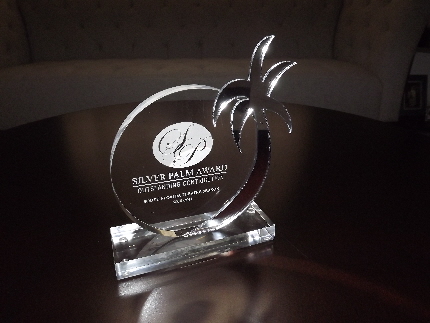 Twenty of the most respected and beloved figures who have built South Florida theater — from impresario Jan McArt to critic/arts journalist Christine Dolen — have been selected to receive the regions Silver Palm Award later this year.

The honorees encompass veteran actors, artistic directors, a stage manager, a sound designer and recognize the leaders of emerging companies such as Slow Burn, Thinking Cap, Outré and Island City.

The awards created six years ago by the South Florida Silver Palm Theatre Awards committee are meant to be less regimented and more inclusive than the Carbonell Awards.

“The Silver Palm Awards are presented annually to those who have made an outstanding or unique contribution to the South Florida Theatre,” explained Silver Palm Awards Executive Committee Chairman Tony Finstrom. “There are no nominees, no winners or losers, and no limit to the number of citations given in any category, though there really are no official categories.”

Silver Palm Awards have been presented to over 70 individuals or groups during the previous five seasons, each ending in August.

This year the awards presentation will be held during the annual Theatre League Holiday Party, recxognizing its 20th anniversary, at Stache, a 1920s drinking den, 109 SW 2nd Ave. in downtown Fort Lauderdale from 7:30 to 10 p.m. Dec. 2. The party is open to the public, but there is a $25 admission charge. Theatre League members attend free of charge. Call League Executive Director Andie Arthur for reservations, and further information, at 954-557-0778.

This years honorees and the citations from the committee are:

## Antonio Amadeo, for his outstanding work as producer, writer, director, designer and actor in A Man Puts On A Play at The Naked Stage, which he co-founded in Miami.

## Stephanie Ansin, for her outstanding creative staging and production of Three Sisters at the Miami Theatre Center, the former Playground Theatre which she founded in Miami Shores.

##  Ann Kelly Anthony, for her outstanding hard work and commitment as executive director and board chairperson at the Mad Cat Theatre Company in Miami.

## Andie Arthur, for six years of outstanding and dedicated work as the executive director of the South Florida Theatre League.

## Matt Corey, for his outstanding Sound Design for The Birds, the last production of the Mosaic Theatre in Plantation.

## James Danford, for his outstanding stage management, working at various theatres (many of them in South Florida) for over 30 years.

## Christine Dolen, for thirty-four years of outstanding and distinguished theatrical criticism at the Miami Herald, and for her relentless commitment to the South Florida theater community.

## Lela Elam, for her outstanding performance in Ruined at GableStage.

## Patrick Fitzwater, for his outstanding direction and choreography of Side Show at Slow Burn Theatre in Boca Raton.

## Ethan Henry,  for his outstanding performances in A Raisin In The Sun at Palm Beach Dramaworks, and in King Hedley Ii at  M Ensemble in Miami.

##  Andrew Kato, for his outstanding work as producing artistic director of the Maltz Jupiter Theatre.

## Harriet Oser, for her outstanding performance in Driving Miss Daisy at The Plaza Theatre in Manalapan.

## Skye Whitcomb and Outré Theatre, for emerging as the outstanding new professional company in South Florida this season.

## Nicholas Richberg, for his outstanding performance in Cock at GableStage in Coral Gables.

## Erin Joy Schmidt, for her outstanding performances in Blow Me at Mad Cat Theatre, and in Other Desert Cities at Actors Playhouse in Coral Gables.

## Nicole Stodard, for producing consistent and outstanding presentations of daring and challenging works at Thinking Cap Theatre, and for her outstanding adaptation and production of The Rover.

## Shorts Gone Wild, awarded to John Manzelli of City Theatre and Andy Rogow of Island City Stage, for their co-production of the outstanding LGBT theatre piece of the South Florida theater season.

## Tom Wahl, for his outstanding performance in I Am My Own Wife at Zoetic Stage in Miami.

## Mike Westrich, for his outstanding performance in Tick, Tick Boom at Outre Theatre.