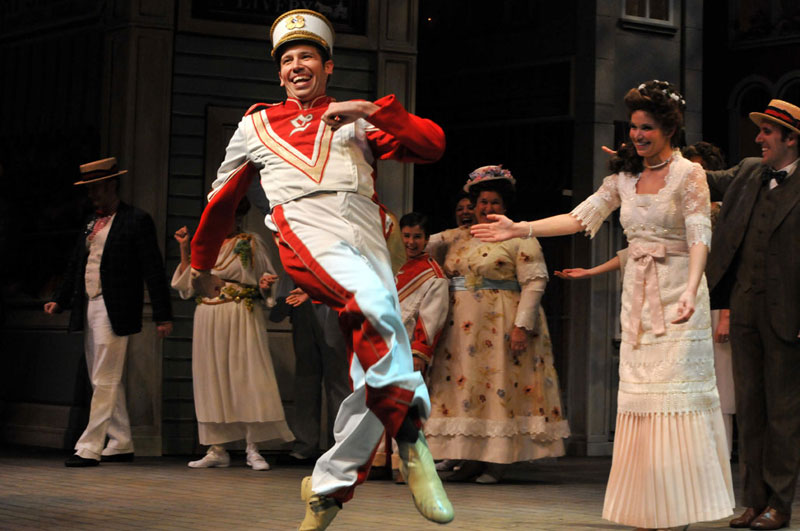 The Maltz Jupiter Theatre’s The Music Man garnered nine nominations including one for Matt Loehr.

The 2013 Carbonell Award nominations announced today mirror the changing face of South Florida theater. There are farewells for three companies that closed in 2012 and recognition of five troupes mounting their first works in 2012, plus community-by-community figures that presage shrinking theatrical options in Broward County.

The 37th annual awards recognizing excellence in locally-produced theater will be presented on Monday, April1, at the Broward Performing Arts Center in Fort Lauderdale. Tickets are sold to the public, but insiders call it “theater prom” because industry professionals take the occasion to dress up and party afterward.

Some of the nearly 100 nominations emphasized racial diversity with at least seven shows focusing on black themes, race relations and/or major black characters. Most notable was Lynn Nottage’s Ruined,  GableStage’s harrowing tale of survival amid a brutal civil war in Africa. With nine nominations, it tied with Maltz Jupiter Theatre’s The Music Man for the largest number of nominations for a single production.

Some nominations were bittersweet nods to companies that shuttered during the year:
.       ## Promethean Theatre of Davie took three nominations for Margaret M. Ledford’s direction, Matt Corey’s sound design and best supporting actor for Alex Alvarez from its final production nine months ago, The Unseen. 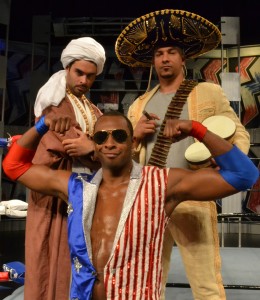 .       ## The Caldwell Theatre, which locked its doors in Boca Raton the same day as the Carbonell Awards last year, took four nominations for its acclaimed penultimate production of the pop culture satire The Elaborate Entrance of Chad Deity, earning mentions for production of a play, best actor for Brandon Morris’ streetwise narrator, set and sound designs.
.       ## Mosaic Theatre of Plantation claimed three nods for its last production last month of The Birds, claiming nods for supporting actor for Kevin Reilley and sound design, plus scoring a nomination in the new play category for its world premiere commission of Joe Calarco’s A Measure of Cruelty inspired by the Michael Brewer burning case.

Work by smaller, newer companies making their bow last year received a share of the recognition:
.       ## Island City Stage, Andy Rogow’s reinvention of the defunct Rising Action company, got a best ensemble nod for its first offering, the two-actor multi-character The Twentieth Century Way, presented with Empire Stage.
.       ## Arts Garage in Delray Beach, the leaner brainchild of Florida Stage’s founder Louis Tyrell, gathered four nominations connected to its revival of the acidic Cabaret Verboten including best musical, best ensemble and best supporting actor for Wayne LeGette.
.       ## Plaza Theatre in Florida Stage’s old space in Manalapan was rewarded with best actor and actress nominations for John Archie and Harriet Oser in Driving Miss Daisy, its first foray into drama rather than the musical revues it mounted when it opened last year.
.       ## Kim Ehly’s play about a young lesbian discovering her sexual orientation,  Baby GirL, garnered a best new play slot for her fledgling Kutumba Theatre Project, and Terri Girvin’s one-woman show about her life as a bartender Last Call also took a nod for sound design for First Step Productions.
.       ## Small budgets were not a barrier: Naked Stage’s eerie The Turn of the Screw garnered recognition for Ledford’s direction, Katherine Amadeo’s performance as the haunted governess and Ledford’s lighting design.

The shifting geographical concentration of theaters also was reflected in the numbers: 45 nominations in Palm Beach County compared to 43 last year, 42 in Miami-Dade County compared to 28 last year and 13 in Broward County compared to 27 last year. With the moving of Women’s Theatre Project from Fort Lauderdale to Boca Raton and the closing of Mosaic, the figures will likely be even more lopsided next year.

The Maltz Jupiter Theatre with its six-figure budgets dominated the musicals category once again with nine noms for The Music Man, eight for Hello, Dolly! and four for Cabaret. While the last was a carbon copy of previous productions, the others were notable for a freshness to their approach. This was especially evident in Matt Loehr’s portrayal of Harold Hill without a shred evident of Robert Preston and Vickie Lewis’ creation of a Dolly Levi that owed nothing to Carol Channing, performances that earned nominations for both.

As always, the nominations create a few cases in which people are competing against themselves or have the chance to take home multiple awards:
.       ## Margaret M. Ledford as director for The Unseen and The Turn of the Screw,
## Supporting Actor Alex Alvarez vs. Supporting Actor Alex Alvarez for the terrifying guard in The Unseen and the supportive gay friend in The Motherf**ker With The Hat at GableStage,
.       ## Matt Loehr with a nomination for the lead spot for The Music Man and an equally good shot for a supporting actor statue for Cornelius Hackl in Hello, Dolly!,
## Two supporting actress nods but in different categories for Angie Radosh for her pragmatic landlady in the Maltz’s Cabaret and the alcoholic sister in Dramaworks’ A Delicate Balance.
## Lela Elam is up for her work in Ruined and Moscow.
## Sound designer Matt Corey is competing against himself again in three shows: The Birds, The Unseen and A Steady Rain.
## Michael McKeever is nominated for the set design in
I Am My Own Wife and as a playwright for best new work in Moscow.
.       ## Marcia Milgrom Dodge as both director and choreographer of Hello, Dolly! 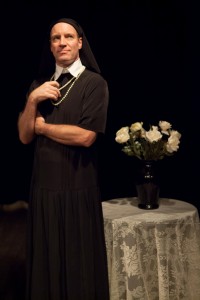 Tom Wahl in Zoetic Stage’s I Am My Own Wife

.       ## Zoetic Stage, just entering its third season, scored 10 nods related to the bravura  I Am My Own Wife and Michael McKeever’s world premiere script about Cold War Miami in Moscow.
.       ## Alliance Theatre Lab is the ten-year old company that has been revitalized by a cadre of young actors and playwrights. Its recently concluded season of all-new works by its members resulted in three nods for Mark Della Ventura’s Roomies and David Sirois’ Off Center of Nowhere.
.       ## Actors Playhouse’s revival of the mainstream  Joseph and the Amazing Technicolor Dreamcoat was recognized with three nominations, but it was the chancier next to normal that took six nods along with three for Jason Robert Brown’s The Last Five Years.
.       ## Long titles seemed to be a good luck charm: Caldwell’s The Elaborate Entrance of Chad Deity, Palm Beach Dramaworks’ The Effect Of Gamma Rays On Man-In-The-Moon Marigolds, and Actors Playhouse’s Joseph and …well, you know. But brevity didn’t hurt either: Ruined, Moscow, Cabaret, Amadeus and Rumors.

## Among the shutouts: New Theatre, which moved to the Roxy Theatre Group near FIU after losing its Coral Gables digs, was edged out of every category despite mounting a well-received if flawed world premiere of Robert Caisley’s Happy.

Tickets go on sale on Friday, February 1, for the ceremony, which will take place in the Amaturo Theater. Tickets purchased in advance are $25 with $20 tickets available for groups of 10 or more, $35 at the door.  Tickets will be available at the Broward Center’s box office or by visiting www.browardcenter.org.  The ceremony will be produced by Michael McKeever, who earned nominations for both playwriting and scenic design, and directed by Stuart Meltzer, who is nominated in the best director category.  McKeever and Meltzer also produced the 35th annual Carbonell Awards ceremony in 2011.

Proceeds from tickets sales and donations fund scholarships for high school students committed to studying theater in college. The deadline for applications is Feb. 15. For more information, see http://carbonellawards.org/scholarships/

The Carbonells awarded in the spring reflect shows from the previous calendar year, not the season as most theaters define it. The process begins with a rotating panel of six nominators seeing every production that meets the criteria and recommending whether there is at least a single aspect worthy of consideration. All of the shows that are recommended are seen by panel of about a dozen judges. The judges develop a list of nominees and vote weeks later.  Details of the process are at http://carbonellawards.org/about-2/the-award-process/

The awards were created in 1975 by the South Florida Entertainment Writers’ Association, Inc., comprised mostly of local theater critics, and dubbed the theater Circle Awards. As the number of theaters grew across the three counties, the work load grew and the number of full-time critics seeing all the shows in the region shrank. The judging panel was expanded in 1992 to include theater professionals and knowledgeable civilians. The awards are named after the late sculptor Cuban-born and Miami resident Manuel Carbonell, who created the egg-shaped statuette for the critics` association in 1976.

The complete lists of nominees and statistics can be found by clicking here.