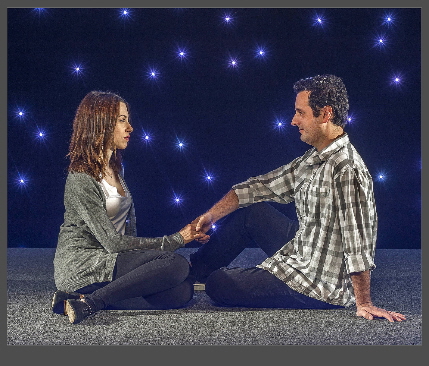 Antonio and Katherine Amadeo, the award-winning South Florida couple who separately and together championed cutting edge work through their Naked Stage company and who helped unite the local artistic community with their 24-Hour Theatre Project, plan to leave the state that has been their family and artistic home for most of their lives.

Their departure, likely next summer for Colorado, ends their plans to open a new venue in West Palm Beach focused on exciting younger audiences about theater as an entertainment option.

Citing changing family priorities, the couple plans to move with their two children after their older daughter, Lara, finishes out the school year, they said Tuesday.

The co-founders of the Naked Stage worked 17 months planning and designing a 145-seat venue at the former Authentic Provence antique shop at 522 Clematis Street. When they revealed their plans publicly last summer, they thought it could take up to a year to open, but they said months ago that the logistics had been more challenging than they expected.

If it had opened, it would have bookended Clematis with Palm Beach Dramaworks at the other end, furthering city officials’ hope of revitalizing that downtown business-entertainment corridor.

The couple wrote in an email Tuesday, “It was a dream come true for the artists in us who had longed for such a chance. Over the next year or so, we spent a considerable amount of time and energy designing and developing what would have been our dream space. Artistically, we were in heaven.

“Our lives, however, are not made up of merely our craft. Our happiness lies in our family life. And, as the complex realities of raising and focusing on our family intensified over the past year, it became clear that the massive undertaking that awaited us in the impending creation of the new theatre was going to make it near impossible for us to put the necessary level of care and attention where we really needed it: on our family. New goals and outlooks for our home life have shifted our perspective on things. And so, we have made the very difficult decision to halt the progress of The Station Theatre and lower the curtain on The Naked Stage.”

The couple were acclaimed actors who worked repeatedly for two decades in almost every major venue in the area including GableStage, Florida Stage, Mosaic Theatre, Palm Beach Dramaworks and Actors’ Playhouse where they met during The Sound of Music.

Both were known for a wide range of roles: Katherine could be the chilly repressed Miss Julie, the daffy heroine in Unnecessary Farce or the unhinged protagonist in 4:48 Psychosis. Antonio could wring out an audience’s empathy as the title character in Mosaic Theatre’s The Elephant Man or savor farce as the playwright in GableStage’s It’s Only A Play.

While they often worked apart, they also teamed up, most recently in an acclaimed double-act in the challenging Constellations at GableStage last November in which a couple recreates infinite versions of their evolving relationship.

They and Naked Stage were frequent nominees and recipients of awards. Antonio won the best actor category twice as the tortured writer in The Pillowman at GableStage in 2007 and then last spring as the anguished lover in Daniel’s Husband at Island City Stage. The company received the Carbonell’s Ruth Foreman Award in 2014 for the 24-Hour Theatre Project’s bringing the theater community closer together.  Katherine, Antonio and Naked Stage won Silver Palm awards including best emerging company and the Remy Service Award. Both actors have numerous Carbonell nominations.

With colleague John Manzelli, they founded Naked Stage in 2007 on a shoestring budget and performing on the tiny stage at the Pelican Theatre at Barry University, which required the trio to serve as producers, actors, directors and designers. Using fertile imagination to make up for resources, they mounted a wide variety of works ranging from an intense two-actor horror classic The Turn of the Screw to the comic book inspired Macon City by Marco Ramirez. Katherine served as artistic director, Antonio as artistic producer and Manzelli often directed until he left to helm City Theatre in Miami. They then used director Margaret Ledford for some productions

Naked Stage bowed with an off-beat adaptation of Romeo and Juliet by Antonio and Manzelli called By Any Other Name. Always straining to raise operating funds and with its three principals involved in other projects, the company produced intermittently only another eight shows. The most recent was 2015’s Miss Julie – a title they had sought to mount for years.

Among the company’s artistic triumphs was a decidedly challenging adaptation of Sarah Kane’s play about a woman on the verge of suicide, 4:48 Psychosis, directed by Paul Tei – which transmuted a script of disjointed spare unassigned dialogue into a harrowing evening of surreal theater.

But they may be best remembered besides their performances for creating the local 24-Hour Theatre Project. In 2008, they joined with three other theaters to produce an all-volunteer fundraiser that echoed similar programs around the country.

About ten playwrights — sometimes actors and directors not known for their writing chops – gathered after sunset to a host theater and were given absurd titles. Then they retreated overnight to pen 10-minute plays. The next morning, volunteering directors, actors and crews were chosen at random to rehearse and mount the works. By early evening, 24 hours after the process started, the plays were performed for a paying audience.

The results were often (but not always) funny and promising; some went on to be used in City Theatre’s Summer Shorts. But the real accomplishment was how the event coalesced the sometimes divisive elements of the local theatrical community and forged a sense of unity that lasted throughout the year.

Eventually, Naked Stage became the sole producer of the annual event. It also repeated the project to offset medical bills for their critically ill colleague Dana Castellanos in 2014.

The affable couple’s popularity among their peers was evidenced by the scores and scores of colleagues from every aspect of theater who volunteered their time, resources and stages for the marathon effort.

Antonio is well-known as an incisive observer of the arts scene’s strengths and weaknesses. For a question-and-answer feature in Florida Theater On Stage in 2012, he was asked why South Florida theater doesn’t have a higher profile nationally.

He wrote, “We barely have a profile here in South Florida. How can we expect to have a high profile anywhere else? We live in a community that has no tradition for supporting theater, so there isn’t a core, community-wide audience of patrons that travels to all the regional theaters. Each theatre must rely on whatever small but loyal following it cultivates…There’s a lot of quality work here, but few people know it exists as a legitimate theater region.”

“There is no local government support and zero local broadcast coverage. There is no major relationship with any tourism information organization, so people coming in from out of town are not being introduced to us’… There is also very little effort made to cultivate new audiences and artists through local schools; many of which have great theater programs filled with students who are unaware that there is a local theater community to support and engage. Upon graduation, the students leave town without ever considering a return home to be a viable option. Consequently, they never spread the message that there is great theater in South Florida because they don’t know it themselves.”

But the couple’s love for the region and its artists never dimmed. In their email Tuesday, they wrote, “This development is bittersweet, for sure. Saying goodbye to the South Florida theatre community, which has meant so much to us for so many years, is truly difficult. But we are looking forward to this exciting new chapter in our lives.”