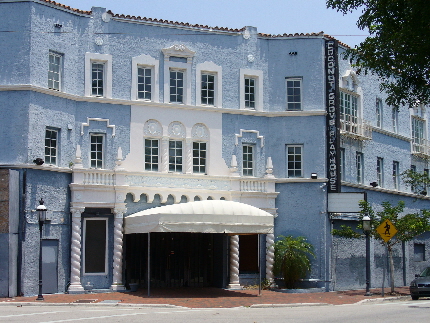 The Miami-Dade County Commission faces a decision Tuesday that could make or break the resurrection of the historic Coconut Grove Playhouse as deadlines close in.

With discussions still underway on deal-killing debts, the commission will consider in its last meeting of the year whether to authorize the mayor to incur no more than $120,000 of expenses to seal outstanding deals before a Jan. 15 drop dead date, an agenda shows.

Jan. 15 is the deadline set by the current Playhouse owner – the state of Florida – for the title to be cleared of all encumbrances. If that occurs, the state would enter a 50-year renewable lease with the county. If not, the state can put the property on the auction block where commercial developers could bid on the sought-after property in the Grove business district.

The county wants to join with Florida International University and GableStage to create a professional theater and educational complex at the site. The nationally-renowned Playhouse’s non-profit board of directors shuttered the building in the spring of 2006 during its 50th season amid a mountain of debts.

Six businesses or government agencies still have about $3.561 million in claims outstanding. County officials have finalized deals for a fraction of the claims with two of the claimants. Those deals are offered to the county commission for approval Tuesday. Two others claimants have agreed to deals in principle that may be ready by Tuesday.

But two other claims remain in unpredictable negotiations, said Michael Spring, director of the Miami-Dade County department of cultural affairs.

“This stage of the process is very complex, one with a lot of moving parts,” Spring said Thursday morning. Still, “We’re hell bent on success…. We wouldn’t even be bringing an item to the county commission if we didn’t think we had a working chance.”

If the commission agrees, Mayor Carlos Gimenez – whose office has strongly supported the project – could indebt the county for up to $120,000 to settle all debts plus pay for closing costs and title clearance.

But given the county’s tight fiscal restraints, all deals and costs would be paid for with future proceeds from the parking lot on the Playhouse property, Spring said. Currently, that generates an average $17,000 a month, the agenda item states.

All of the pending deals would be put in escrow and would only be fulfilled if all of the debts are settled, the agenda item states.

Lisa Martinez, senior adviser to Gimenez, said, “If the commission approves it on (Tuesday), we’re on our way. It seems within reach.” While Martinez would not predict how a vote would go, she noted that the commission has previously agreed to such limited deals and that commissioners’ main concern so far has been not to spend any more operating budget money on the clearing of encumbrances.

The two creditors in continuing negotiations are:

—The Coconut Grove Business Improvement District which collects an assessment from all companies in its area for projects such as street lighting. It is owed $34,323.

—Primer Printing Solutions which has not backed off its claim of $58,412.

“We can’t pay full freight,” Spring said. Martinez added that the county plans to press the remaining creditors to be as cooperative and generous as the creditors who have already settled.

Those who have agreed on paper or in principle are:

—Aries Development Group had invested money with the now-defunct Playhouse board of directors in hopes of development the property. Its most recent claim was $1.5 million, but the firm has agreed to take $15,000 – a move praised by the county officials.

—The City of Miami, which calculated $1.952 million in numerous types of debt including building fines, has agreed to trade them for the right to manage the parking lot for a management fee.

— Best Wholesale Office Products has agreed in principle to reduce its $3,387 claim to $500.

–The state Department of Revenue has agreed to waive the $12,296 it is owed.

Another ongoing twist to the situation is a land swap. The county has been talking with the state about trading surplus land, thereby giving the county full title to the property, Martinez said. Those discussions will continue, especially if the lease deal goes through Jan. 15.

If the title is cleared, the county would begin the lengthy and detailed process of competitive bidding for architects and planners, Spring said.

If the Jan. 15 deadline is not met, the state has options, said Patrick Gillespie, spokesman for the state Department of Environmental Protection which manages the state’s surplus land.

While the land could go be put back out for bidding, the state statutes don’t require that the state “be bid beyond that point… They state that the Board is tasked with determining the best use for the property. While there is a Jan. 15 deadline to resolve the encumbrances, it doesn’t mean that DEP has been directed to surplus (sell or lease it ) beyond that date.”

If the deal does goes through, it paves the way for a partnership outlined in a FIU business plan memo. It posits that GableStage operate a 300-seat theater with an annual $2.6 million budget in what would likely be a new building on the current parking lot. That structure would be built with about $20 million in county bond money already earmarked by voters. The property that FIU would lease from the state would also host programs in which students would train and participate alongside theater professionals. The fate of the Playhouse’s original 87-year-old structure has not been decided.

The three-story Spanish Rococo building on the City of Miami’s list of historical site has played a major role in Florida cultural history, becoming one of the nation’s leading regional theaters that emerged after World War II. Producers like Zev Buffman, Robert Kantor, Jose Ferrer and, after 1985, Arnold Mittelman mounted their own shows, hosted national tours and even provided a home for works being developed for Broadway.