Plaza’s I Love You, You’re Perfect, Now Change Is, Well, Close To Perfect 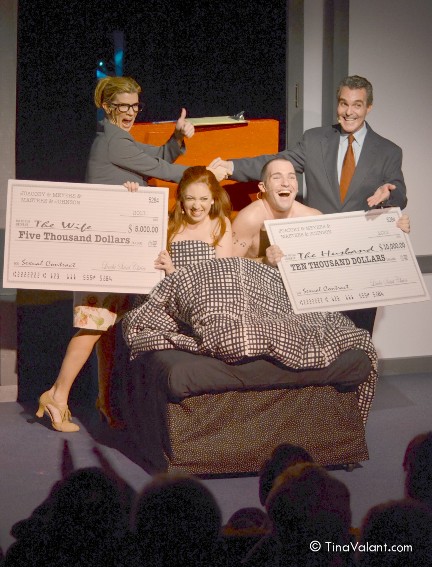 There is only one way to ensure that I Love You, You’re Perfect, Now Change, doesn’t morph into a cheesy Hallmark card, which it has the potential to do with its vignette-divided musings on dating, marriage and everything in between. In The Plaza Theatre’s production of Perfect, the cast and its director understand the essential ingredient that can really make this show tick…ya gotta have versatility.
Yes, versatility is the name of the Perfect, Now Change success game. So, with the weight of that hoisted on four very capable actors, a musical director who understands the score, and a director/choreographer who can ably move the cast through more than 60 roles collectively, Perfect finds its way through this maze.

Wayne LeGette, Mia Matthews, Leah Sessa and Mike Westrich are assigned the anonymous roles Man #1, Man #2, Woman #1, Woman #2, in the two-act musical revue, which takes on everything from first dates to love and marriage in the first act, to family car trips and elderly love in the second act.

Songwriters Joe DiPietro (book and lyrics) and Jimmy Roberts (music) pack the show full of catchy tunes. The composers cover just about every musical genre, including tangos, ballads, country western, and the opening and closing cantata, which borrows from Gregorian chant.
Perfect is locked in a bit of a late 20th century time warp, too, but it only adds to its sweet spot. There aren’t blended families or diverse relationships in this heteronormative take. This Perfect knows its audience and plays to it. No doubt, there are many scenes that will connect on an organic level with Plaza regulars. (Legend has it that at one the original show’s premieres in 1995 a woman couldn’t contain herself and blurted out “This is my life!” There were a few such conversations intermingling at intermission in the Plaza ladies room.)

Matthews and LeGette show their wonderful chemistry early on in the first act in Not Tonight, I’m Busy, Busy, Busy, about two people who are so tied up in work schedules that they decide to skip date one and move to date two, then go to the first argument, then skip ahead to the breakup. . . then. . . well, you get the gist.

LeGette plays Man #2 in this incarnation of Perfect, but he’s no stranger to Change. He was the younger Man #1 previously in more than 400 performances of the show at Actors’ Playhouse, Delray Beach Playhouse, Florida Repertory Theatre and Foothills Theatre in Worcester, Mass. As Man #2, he’s given the more mature of the roles. His tender bari-tenor simply shines in one of the most engaging songs of the evening, Shouldn’t I Be Less in Love With You?, a poignant commentary on the flame of love that can still flicker after decades of marriage.

Paired with LeGette in many scenes is Matthews, although she has her share of single moments on stage. She carves out a comedy niche here, especially in the “every woman can relate to this” Always a Bridesmaid, a country-western tinged rouser that helps to kick off Act 2, about being selected to participate in weddings wearing one hideous bridesmaid dress after another. “For Caitlin, I wore satin, which I looked really fat in!,For Tabitha, I wore taffeta; you should never — people laugh at ya” with Matthews delivering the lyrics with a droll take.
Woman #2 has been afforded the role that offers the most opportunity here to explore range and physicality — Matthews takes full advantage of it from the crazy Midwest Mom getting the family together for a road trip to an octogenarian who gets flirted with at a funeral. Her characters build each step of the way until the final scene, a wonderful tearjerker with LeGette that serves to bring the continuity of the show’s relationship conversation full circle. In Funerals Are For Dating, an elderly couple meet at a stranger’s funeral and realize they have a chance at second love. (Get out the hankies for this one because this duo digs deep at the heartstrings. It’s the highlight of the show.)

Sessa shows her acting and singing chops especially in the humorous and over-the-top He Called Me, about a woman who waits by the phone for that elusive boyfriend telephone call. And she hits on every emotion in the bittersweet, yet comical The Very First Dating Video of Rose Ritz, a song about emotional battering, about a wife trying to bounce back after husband blindsidedly leaves her “for an older woman with grandkids and a bad hip.”

As the nerd who wishes he was more, in A Stud and a Babe, or the babbling new dad dripping baby talk in Baby Song, Westrich adds intricacy to a role that could easily play as monotonous in each scene. But as the doe-eyed, ‘Who me?’ regular guy, he’s able to find different opportunities in each to add variety.

The simple set by Michael McClain utilizes three sets of doors, used for entrances and exits, and three play areas. The sliding doors weren’t up to the task on opening night. A few technical difficulties proved distracting as stage hands wrestled to open and close the doors. No doubt this has been fixed. Kudos to the professionalism of the actors who didn’t miss a beat, and even ad libbed in character to acknowledge a door that at one point fell completely off its track and hit the floor. A boo to audience members who had to comment aloud on the doors debacle. It’s live theater, people!

Director Kevin Black gives the show a cabaret kind of feel with some easy, yet fun choreography, and utilizes the material judiciously to show it at its best and wittiest. Perfect needs a little push in that direction to keep it from playing too sugary. Eric Alsford’s musical direction is also precise and he gets the most from this Fab Four of talented singers.

Perfect isn’t perfect. There are some hackneyed stereotypical musings throughout such as men not asking for directions or not paying attention to wives/girlfriends during the Big Game on the television, and women who take too long to get dressed. But there are enough highlights to keep an audience entertained and a collaborative group both on stage and off that is hell bent on ensuring that their audience has a wonderful time. That’s what makes this show, well, almost perfect.

This entry was posted in Performances, Reviews and tagged I Love You You're Perfect Now Change, Kevin Black, Mia Matthews, Mike Westrich, The Plaza Theatre, Wayne LeGette. Bookmark the permalink.