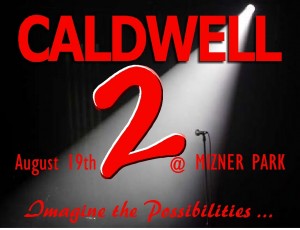 Pessimists’ jaws dropped this month when the Caldwell Theatre Company, struggling to whittle away at a hefty mortgage, announced that it was opening Caldwell 2@Mizner.

Beginning next month, the Boca Raton troupe will produce an additional season of four plays in the second-floor black box theater inside the Mizner Park Cultural Arts Center.

“It is really to pick up on more intimate stories that would get lost on our main stage. In terms of the type of plays, it isn’t more comedic or edgy. We’re looking at it as a place for (stories of a) more personal scope,” he said.

A perfect example is The Guys —a show that the company is still negotiating rights to but has penciled in for Sept. 8-25. The emotionally-wrenching two-character drama focuses on a New York City fire captain asking a magazine editor to help him write eulogies for the men he lost in the Twin Towers tragedy.

Kenneth Kay, who will head the overall project, said, “We’re not 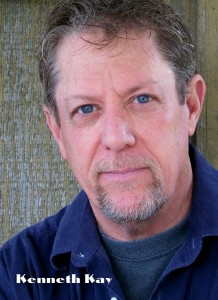 going to compete with what they doing up there” at the main theater on Federal Highway. “From a budgetary and aesthetic point, these will be smaller shows that feature fewer special effects and, because of its intimate setting, will kind of try to focus on the relationship between the audience and the actors.

“There will be solo pieces and some small cast shows and there might be a reimagining of some musical when we can afford it. We’re not going to bite off more than we can chew,” said Kay, a longtime Caldwell actor and director. Possible solo shows include The Belle of Amherst starring Kay’s wife and Caldwell stalwart Kim Cozort and Ernie Pyle: Here is My War by another Caldwell regular, Dan Leonard.

Three other dates have been slated for three-week runs: between Thanksgiving and Christmas, in February/March and April/May.

The fiscal logistics are not as risky as they sound because the Caldwell will rent the hall. The Mizner space is fully equipped with light and sound equipment. The only things  the Caldwell has to bring are props and minimal set pieces. The back-office costs will only slightly increase current costs. The primary expense will be personnel; Kay hopes to hire some Equity actors if Caldwell2 can get union concessions by adding educational programs to the mission.

“Our costs on it in terms of operating expense are so much infinitely less and the margin with what it costs to produce is small enough that it’s a slam dunk,” Cholerton said.

That dovetails with Caldwell’s other piece of good news: The financial problems show signs of easing up, Cholerton said.

“Right now, we’re heading into the last two months of our fiscal year and we’re right now running a very slight slight profit,” he said. “That’s a testament to really cutting our costs and having a very stable season. We didn’t have any solid blockbusters, but they all made the numbers we had budgeted, or if they came up short, we made up for it with another show.”

Money has been a headache for four years. Shortfalls in contributions and rising construction costs made it impossible for the Caldwell to open its $10-million Count de Hoernle Theatre in December 2007 free and clear as its leaders had hoped. The theater’s debt has been reported at a half-million dollars plus a $5 million mortgage.

Earlier this month, the Caldwell reaped another windfall. The bank holding the mortgage offered to refinance the loan, resulting in a $5,000 a month savings. But the theater needed a $40,000 down payment it didn’t have. To the rescue came, a gift from the Lowe II Foundation.

“We haven’t made the problem any worse and we’re making headway in attacking it. Sometimes it doesn’t feel like we’re making the progress we hoped, but definitely, the darkest days are behind us,” Cholerton said. 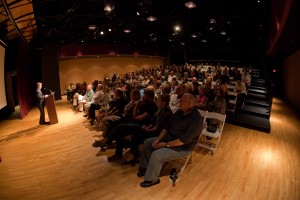 This entry was posted in News and tagged Mizner Park. Bookmark the permalink.