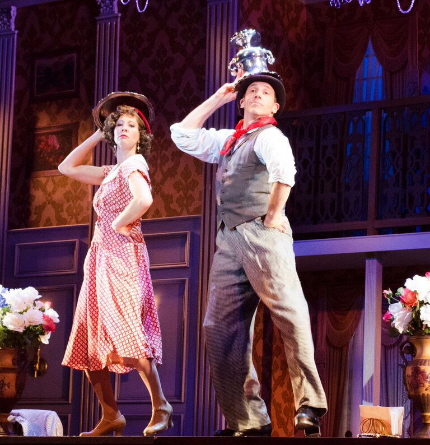 Julie Kleiner and Matt Loehr cavort in Maltz Jupiter Theatre’s Me and My Girl, the show with most Carbonell nominations including nods to both performers

Few could be surprised that the Maltz Jupiter Theatre’s rousing musical Me and My Girl led the list numerically with 10 nominations. But the production with the second most nods was Zoetic Stage’s harrowing drama After with eight. That’s unusual because musicals have more categories to rack up the numbers than a straight play.

Click here to read a complete list of 2016 Carbonell Award nominations and breakdown by show, theater and county.

The winners as well as special honors and scholarship recipients will be announced at the April 3 ceremony at the Broward Center for the Performing Arts, nicknamed “Theater Prom” by the thespian community but which is open to the public.

The competition was unusually stiff this year by all accounts. Carbonell panelists recommended 41 plays and 29 musicals to the judges for further consideration. The number of outstanding plays was so large that six shows are finalists for best production of a play instead of the usual five. Nineteen theaters and 36 shows were named in the finalists list.

The 41st annual award recognizing excellence in South Florida theater during 2016 also tapped fledgling names. MNM Productions, now housed at the Kravis Center, which has focused on musicals like Hair and Side by Side by Sondheim, scored a best ensemble nomination for its Kander and Ebb revue, The World Goes ‘Round.

Miami New Drama, which Michel Hausman created with New York colleagues at the Colony Theatre, scored two nominations with its very first offering, The Golem of Havana. The restaging of Hausman’s previous New York City production depicted Jews living in Cuba in the early days of the revolution. Veteran local actor Chaz Mena was tapped for supporting actor in a musical and Hausman is in the list for best director.

The little-known West Boca Theatre based at the Levis Jewish Community Center mounted Dan Clancy’s Middletown, which tracks the friendship of four ordinary middle-class friends, cited as one of best new work candidates 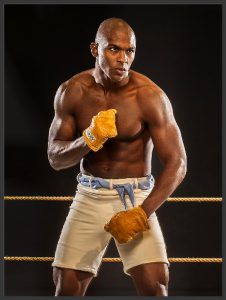 Some new names also emerged in the performance categories: Gary Cadwallader, Palm Beach Dramaworks’ new director of education and community engagement, as John Adams in the company’s 1776; Rita Joe as the minority beard for a white playwright in Island City Stage’s, The Submission; Aygemang Clay as the charismatic fighter in GableStage’s The Royale, his first professional performance; and Stephanny Noria as the heroine in Slow Burn Theatre’s Spring Awakening.

Certainly, the big guns gathered a lot of recognition: Slow Burn Theatre was tapped for 12 awards for elements of Heathers, The Hunchback of Notre Dame and Spring Awakening. The Maltz’s work was honored for facets of Frost/Nixon, Me and My Girl, and The Will Rogers Follies, including best actor nominations in the latter two pieces for song-and-dance man Matt Loehr who has three statues already. Palm Beach Dramaworks gathered 11 reflecting work in The Night of the Iguana, Long Day’s Journey Into Night, and its unique spin on the musical 1776.

Zoetic, too, had 13 nominations for work in the Stephen Sondheim’s musical Passion and for After, a Michael McKeever drama that produced nominations as best new work, best play, Stuart Meltzer for director, Mia Mathews for actress, Tom Wahl and McKeever for supporting actor, Jeni Hacker for supporting actress, and Michael McClain for scenic design.

GableStage, also with 13 nominations, was recognized for its gloriously theatrical production of The Royale about sports and race relations; the farce It’s Only A Play; A Minister’s Wife, one of its rare forays into musicals; Stalking the Bogeyman about a grown victim of child molestation; and Hand To God, the dark comedy about a teenager and his satanic sock puppet.

Actors’ Playhouse was honored for work in West Side Story, Million Dollar Quartet and Buyer & Cellar, a one-man comedy about a man working for Barbra Streisand, which gave Chris Crawford as best actor nod.

But more modest companies scored as well. Theatre Lab, the professional company that began fully-staged performances last season at Florida Atlantic University, won two nods for Deborah Zoe Laufer’s Three Sisters of Weehauken. The Theatre at Arts Garage in Delray Beach, which cancelled the rest of its season for this year, scored actress nominations for Elizabeth Price as the troubled dollmaker in Reborning and Avery Sommers as the legendary chanteuse Bessie Smith in The Devil’s Music. 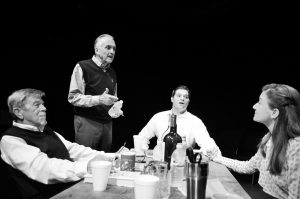 The Death of Walt Disney

Thinking Cap Theatre, the scrappy cutting edge troupe that renovated a church in Fort Lauderdale, received five nominations its surrealistic play Mud and its highly theatrical A Public Reading of an Unproduced Screenplay about the Death of Walt Disney.

There were surprising nods as well. The venerable Area Stage won best scenic design and lighting design for its dystopian The Nether, a product of the company’s attempt to move into adult fare. Mad Cat Theatre’s production of the off-beat three-hour Annie Baker slice of life The Flick was acknowledged for Paul Tei’s direction and its three-actor ensemble. The divisive work was staged in the audience portion of Miami Theater Center.

Another surprising nod was best new work to Family Pool Productions, an ad hoc company in Boca Raton created to develop the world premiere of Charles Gluck’s family play Unlikely Heroes. The other new work nominations were After, Middletown and Three Sisters of Weehawken. While there were several other new works last year, the Carbonell judging committee limited the list to four instead of the usual five.

As often happens, some nominees are up against themselves in the same category or have been nominated in separate categories. They are Caryl Fantel,  for musical direction of The Hunchback of Notre Dame and Passion; Patrick Fitzwater for choreography for Heathers director for Spring Awakening; Jeni Hacker for actress in Passion and supporting actress in After; Laura Hodos for actress in The Will Rogers Follies, and supporting actress in 1776; Michael McKeever for best new work and supporting actor in After; Stuart Meltzer for direction for a musical in Passion and a play After; Marty Mets for sound design for Frost/Nixon and Me and My Girl, and the aforementioned Matt Loehr.

The awards were created in 1976 by the South Florida Entertainment Writers’ Association, Inc. (later called the South Florida Critics Circle) led by Jack Zink of the Sun Sentinel, and Bill von Maurer of the Miami News.

The Carbonell organization uses proceeds from the ceremony and other fund-raising to provide scholarships to graduating high school seniors who plan to pursue a degree in theater or journalism. The awards were renamed the Jack Zink Memorial Carbonell Awards Scholarship last year in honor of the late Sun-Sentinel critic who co-founded the Carbonell program.

The First Annual Theatre Circle Awards held its first ceremony November 15, 1976, drawing about 175 people to the Diplomat Hotel Regency Ballroom. The plays and musical categories were combined and any Equity production was eligible including national tours and road shows.

Numerous changes occurred over time: A “musical variety” category was added, then dropped. Plays and musicals were put in separate categories, the Equity requirement was dropped, national tours were put in a separate category and eventually dropped all tougher.
In 1978, the program was renamed, retroactively, the Carbonell Awards in recognition of Manuel Carbonell, the Cuban-born Miami-based sculptor who donated the bronze gold- colored scooped-out eggs to every winner. Other than one year, his family has continued the practice. The late sculptor was honored in a segment Monday night hosted by Carbonell president Don Walters.

But some resent the awards for making artists competitive, some question the validity of comparing apples and oranges, and some believe the selection reflects prejudices, grudges and hidebound mainstream attitudes of nominators and judges. (Full disclosure: I have been a nominator, assistant administrator and currently a judge.)

The 41st Carbonell Awards ceremony is 7:30 p.m. Monday, April 3 in the Amaturo Theater, at Broward Center for the Performing Arts, 201 S.W. 5th Ave., Fort Lauderdale. Tickets for Nominees and Groups will be available starting Wednesday, January 28 through March 6.  Visit CarbonellAwards.org and click the TICKETS link for full details. Single tickets priced at $25 plus service fee will go on sale to the public on March 13 and can be purchased at the Broward Center’s Box Office by calling (954) 462-0222 or visiting www.browardcenter.org. Day of show tickets will be available for $30 plus service fee.