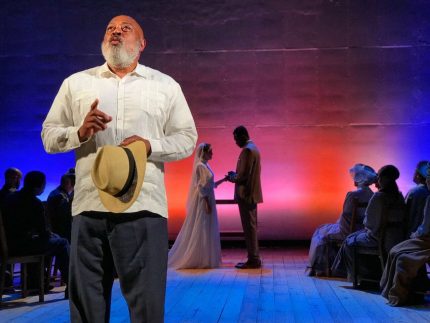 Samuel French, one of the major playscript publishers in the nation, is releasing a new acting edition of the Thornton Wilder classic Our Town featuring some scenes translated into Spanish and Creole pioneered by Miami New Drama’s 2017 production.

In the production underscoring the troupe’s commitment to reflect the region’s multi-cultural milieu, the Gibbs family often spoke Creole in the kitchen and the Webb family spoke Spanish among themselves. But when the characters interacted with the other characters in Grover’s Corners, they spoke English.

The idea conceived by Michel Hausmann, artistic director of Miami New Drama, was endorsed by the Wilder family. The Spanish translations were done by Pulitzer-winning playwright Nilo Cruz and the Creole translations were by Jeff Augustin.’

“Thornton Wilder conceived Our Town as a universal play about everyone, everywhere,” wrote his nephew and literary executor, Tappan Wilder. “This new multilingual version amplifies his perspective in a dramatic 21st century way. We’re thrilled to take this significant step with Wilder’s world-famous play.”

“Miami New Drama’s multilingual production of Our Town set out to expand on the universality of Mr. Wilder’s brilliant work,” said Hausmann. “The goal was to depict a community that truly looked like Our Town. A community of immigrants, divided by language but united by the shared condition of being alive. We are honored that this vision of a modern-day Grover’s Corners will now have the potential to be shared by a diversity of artists and audiences across America.”

The revised work is licensed for future productions through Concord Theatricals.

To read a review of the 2017 production, click here.

This entry was posted in News and tagged Miami New Drama, Our Town. Bookmark the permalink.