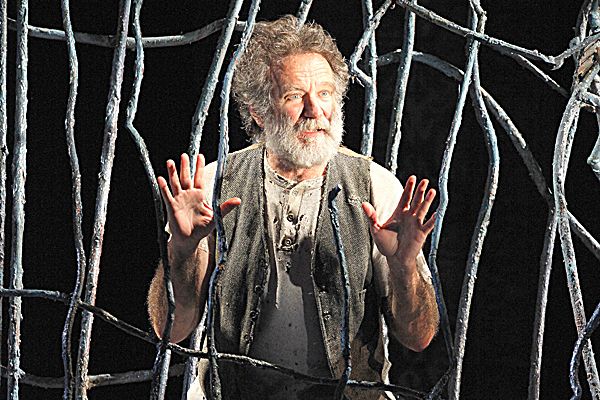 Robin Williams in Broadway production of Bengal Tiger at the Baghdad Zoo, part of Mosaic’s 2012-2013 season

The Mosaic Theatre continues its pirouette along the leading edge of modern drama with the announcements of its 2012-2013 season that includes two works by up-and-comer Rajiv Joseph playing in repertory, a new work by Conor McPherson and an acclaimed modern adaptation of Gogol’s classic The Diary of a Madman.

Experimenting with a production paradigm rarely tried in South Florida, the Broward County theater will mount Joseph’s Bengal Tiger at the Baghdad Zoo, mounted last season on Broadway with Robin Williams and a Pulitzer- Prize-finalist, and the playwright’s Animals Out of Paper. If you schedule it right, you can see both pieces on the same day, although it’s not necessary.

Tiger, which plays Feb. 7 – March 17 in 2013, tells how “the lives of two American Marines and an Iraqi translator are forever changed by an encounter with a quick-witted tiger that haunts the streets of war-torn Baghdad attempting to find meaning, forgiveness and redemption amidst the city’s ruins,” the news release states. The wry funny and moving story opens with the tiger as the narrator.

Joseph’s 2008 Animals Out Of Paper is described as “when a world-renowned origami artist opens her studio to a teenage prodigy and his school teacher, she discovers that life and love can’t be arranged neatly in this drama about finding the perfect fold.”

The shows will be performed every other day, but also one after the other when two shows are scheduled for the same day.

Mosaic will open its 12th season Sept. 20-Oct. 14 with The Diary of a Madman. Nikolai Gogol’s 1835 short story satirizing bureaucracy was adapted in 1989 by David Holman with director Neil Armfield and actor Geoffrey Rush. It was revived in Australia in 2010 and in New York in 2011. Through his Australian theater company, Rush has been producing stunning and highly stylized editions of classic 20th Century plays such as Exit The King by Eugene Ionesco that he brought to New York in 2009, which coincidentally will be mounted by Palm Beach Dramaworks next season.

Diary, the news release states, focuses on “lowly civil servant Poprischin driven mad by bureaucracy. A burnt-out paper-pusher who ekes out a meager living in czarist St. Petersburg, Poprischin spends his days doing menial tasks, anxious and teetering on the brink of lunacy. Or is it lucidity? Immobilized by a rigid social hierarchy, Poprischin cuts adrift from reality: hallucinating a canine love affair, imagining himself well above his station, and conjuring entire realms both incredible and terrifying. Deeper and deeper he sinks into delusion, and—we, too, are eventually subsumed by a world in which reality is, at best, relative.”

Running Nov.15- Dec 9 is the exercise in psychological and ornithological terror, The Birds. The 2009 apocalpytic play by Conor McPherson (The Seafarer, the Weir) was postponed from the current season at the author’s request. The tale was adapted from Daphne Du Maurier’s novelette that inspired Alfred Hitchcock’s film. This version, set in an isolated, abandoned house in Cornwall, posits strangers Nat and Diane, with no electricity and little food, taking refuge from the unnerving masses of birds that attack everyone around them.

The final show in the season is that frequently-mounted and South Florida favorite warhorse, TBA, an intimate epic shot through with rollicking broad comedy and penetrating insights into the human condition written by a genius who melds everyday speech with flights of poetic imagery. That classic is slated for June 6 – 30. Don’t miss it.

This entry was posted in News and tagged Bengal Tiger at the Baghdad Zoo, Conor McPherson, Mosaic Theatre, Rajiv Joseph. Bookmark the permalink.