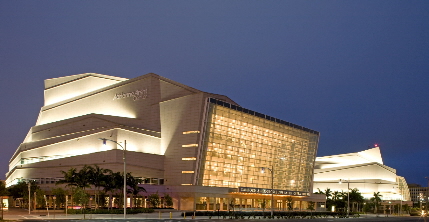 Scott Shiller, who transformed the Adrienne Arsht Center into a catalyst developing local artists as well as widening the array of visiting attractions, is leaving at the end of April to head the Denver Center for the Performing Arts.

The Arsht’s executive vice president will become president and CEO of the Denver Center, the second largest performing arts organization in the nation with multiple venues and which won the Regional Theater Tony Award in 1998.

Shiller has also been president of the Carbonell Awards board of directors since 2010. During his tenure, Shiller led the group in becoming financially stable and he brought a corporate mentality to reorganizing the nationally-recognized awards for excellence after a period of near collapse.

Telling tales through theater has been one of his touchstones. In an interview Thursday, Shiller credited Arsht CEO John Richard and the board of directors down through entire organization in a highly cooperative effort and being “so willing to take risks and embrace storytelling.”

Miami has provided Shiller with a singular opportunity in that respect. “Miami is such a unique marketplace,” he said. “The Miami community is really unlike anywhere else in the country in that there is a spirit of entrepreneurship here, a spirit of adventure.”

Richard, who came to the Arsht a year after Shiller, said he formed a “very solid partnership” with Shiller: “What we were able to do was implement Scott’s real sensitivity to programming initiatives that could resonate in the Miami community, matching what was on our stage with the diversity that we know was Miami. So I think Scott’s footprints and fingerprints will long be on the center.”

His management style was “able to deal in the multi-tasking world of new ideas happening today, a concert or theater performance tonight, and what we’re doing 18 months from now, all in the same today – and thrive,” Richard said Thursday night.

Stuart Meltzer, artistic director of Zoetic Stage that Shiller championed, said, “His number one goal is producing exciting works for audiences. He loves the arts and his legacy is the opportunities given to local artists and artists from all over the country — a place to work and incubate that work and show that work.”

Shiller takes the new reins at a crucial moment in Denver as only its third CEO since 1972 and with major construction projects slated over the next few years. The current CEO and longtime Denver arts icon Daniel Ritchie will continue on as chairman of the board of directors to ease the transition and to continue to build bonds with the community that Shiller doesn’t have.

At the Arsht, Shiller has embraced and encouraged a wide diversity of art forms in his programming choices, but he has been especially proactive in nurturing untraditional tropes in the performing arts, from the watery spectacle of H2Ombre conceived in South America to recitals by the Rosie Herrera dance troupe based in Miami.

With a focus on programming, he has ramped up the sheer number of productions and the sluggish ticket sales that plagued the Arsht’s early years. For instance, during his tenure, subscriptions for the Broadway Across America tours have jumped from 2,000 to 6,000 and several shows have reached the golden $1 million dollars in sales mark for a one-week-stand.

But much of the growth was due to the Arsht becoming an actual producing entity, not just a host-presenter. It fostered local Miami-based artists, partnering with modestly-budgeted companies like Mad Cat (which mounted a revival of Broadsword) and The Alliance Theatre Lab, (a revival of Brothers Beckett). That and other shows began filling slots in the previously empty schedule for the black box Carnival Studio Theater in the complex.

The most high-profile initiative in that respect was the creation of Theater Up Close, seasons of theater comprised mostly of local productions partnered with Arsht’s resources. That effort resulted in 12 world premiere plays and musicals.

“We have really created a new model of the resident or regional theater format,” he said Thursday. “The Arsht put its arms around the community. Rather than every company struggling to do things alone, we’re all stronger together.”

One beneficiary of Theater Up Close has been Zoetic Stage based at the Arsht since its inception in 2010. The collective was founded by Meltzer, playwright Christopher Demos-Brown, businesswoman Stephanie Demos-Brown, playwright-actor Michael McKeever and Kerry Shiller as its managing director. The latter is Shiller’s wife, but Zoetic officials have said they had to compete for the Arsht’s support along with everyone else. The company has thrived at the Arsht, producing such acclaimed works as the world premiere of Fear Up Harsh.

Theatre Up Close also partnered with the University of Miami’s theater department, mounting shows that combined students, educators and theater professionals in works as varied as Metamorphoses and Peter and the Starcatcher.

But not everything was a modest local undertaking. He invested time, resources and seven-digit budgets in original events that relied on large-scale visual and theatrical spectacle such as the disco take on Shakespeare, The Donkey Show, and H2Ombre. Arsht officials have always been circumspect discussing the financial outcomes of such ventures, but they were often seen as investments for future productions that the Arsht would benefit from.

Having worked for years in Chicago, another of his hallmarks was importing expressionistic works from the House Theatre of Chicago such as the artistic triumph of The Sparrow and the financial success of Death and Harry Houdini. Just this week, the Arsht announced that it was commissioning the House Theatre to create The Hammer Trinity, a trilogy of plays inspired by the mythology of King Arthur. The three plays will be performed in weekday repertory as well as weekend marathon performances. And the Arsht’s summer show just announced will be an acclaimed circus-like Lookingglass Alice from Lookingglass Theatre Company, a frequently-revived production from one of the most respected companies in Chicago.

Shiller sees himself as having created a kind of cultural exchange pipeline between the two cities and hopes to be able to do the same with Miami and Denver.

He also championed Rock Odyssey, a musical aimed at entrancing children as a first-time theatergoers. More than 300,000 schoolchildren have been bused to see the show, more than half of them just this past season. It also provided many local actors their first chance to work in an Equity production and get their union card.

Throughout, Shiller has proactively plugged the Arsht into Miami’s multi-cultural, hip vibe. That may be part of what attracted Denver, which has a growing Hispanic population. “Some of what we got right in Miami is that we embraced cultural difference,” he said. He leaned heavily on attracting productions like Fuerza Bruta, which relied more on communicating through universally accessible imagery rather than a single language.

Before coming to the Arsht, Shiller presented and produced shows across the country. Among his posts was serving as the executive in charge of programming at The Chicago Theatre, the Kodak Theatre in Los Angeles, the On the Line Company. He worked in various capacities on Broadway on Wicked, The Graduate, Cabaret, a revival of The Diary of Anne Frank and The Vagina Monologues. He is currently a Tony voter and shuttles to New York several times a year to binge on shows.

When he was initially hired in October 2007 on a temporary six-month contract, the Arsht then known as the Carnival Center was financially troubled, posting a $4.2 million debt its first year of operation due to lagging ticket sales and having run through a raft of executives in a little more than a year. He helped lead a team that turned it around in little more than a year. The center has had balanced budgets for the past eight years.

As far as the Carbonells, the board has been planning for some time for Shiller to step down in May when a new chairman will be elected. Shiller said, “I think I leave the Carbonells in excellent condition with a board of directors that is aligned toward a common vision… and the Carbonell Awards has never been in better financial condition.”

Carbonell board member Jerry Cohen said, “We will sorely miss Scott as the president of the Carbonell Awards. He took over at a time when the perpetuation of the organization was actually at risk. Scott worked tirelessly himself and in addition arranged for needed administrative help, which saved precious dollars. Today the Carbonell Awards is on much better financial footing thanks in no little part to Scott. Congratulations Denver!”

As far as replacing Shiller at the Arsht, Richard was reticent to speculate since the Arsht leaders only learned of the situation Monday. Fortunately, Shiller and his staff have cemented much of next season’s schedule, so the Arsht has some breathing room.

But they will likely fill the position with someone with Shiller’s sensibilities, he said. “Scott has set the bar very high, so we’re not going to lower the target,” Richard said. “I think the people in Denver have made a very wise decision. I feel personally like I am celebrating my younger brother’s accomplishments.”