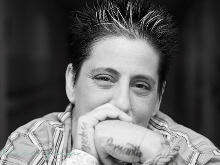 The solidarity of South Florida’s theater community will be on display Monday night at The Dana Plays, a program to raise funds for both the American Cancer Society and Dana Castellano, a member of the community battling the illness.

The evening of staged readings of nine short plays by local authors will be held at 8 p.m. at the Miami Theater Center, 9806 NE 2nd Ave., Miami Shores, under the sponsorship of the South Florida Theatre League, and the leadership of Naked Stage co-founders Antonio and Katherine Amadeo.

Among the plays slated to be seen, most written for the fundraiser, are Be Nice to Me, My Girlfriend Has Cancer by Andie Arthur, So I Was Wondering by Christopher Demos-Brown, Lyd by Jessica Farr, The Purple Troll by Tony Finstrom, F**k You, Cancer! by Avi Hoffman, The Opponent by Michael McKeever, Wearing Hope by Deborah L. Sherman, Ex-Communication by Matt Stabile and We’re in the Money by Paul Tei,

Castellano has been an actress and a strong supporter of local theater for a decade, including serving on the board of directors of The Women’s Theatre Project. She was diagnosed with stage 4 cervical cancer in January.

Castellano originally suggested some kind of fundraiser for the cancer society, but her friends made her a co-beneficiary because she has accumulated considerable bills for treatment. Her plight also has led to the formation of a support group, Team Chaos, whose mandate is to raise funds for, and awareness of her situation.

Tickets are $15 each (with any extra donation welcome), and will be available at the door of the theater the evening of the performance only.

For more information about contact Andie Arthur at andie@southfloridatheatre.com or Carol Kassie at ckassie@gmail.com.

This entry was posted in News and tagged Dana Castellano. Bookmark the permalink.