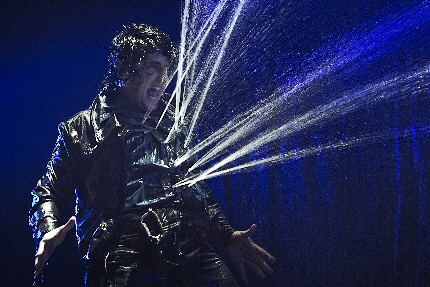 Amid the lights and smoke and bass lines and 6,000 gallons of liquid, the significance of H2OMBRE might get lost.

That’s understandable: With torrents of water erupting out of a performer’s chest like the creature in Alien, with streams shooting out of a colleague’s fingers in 10-foot arcs, with comely fairies appearing out of a wall and writhing to pounding techno music. With all that and far more, the lasting import might be obscured in the Arsht Center’s co-production of H2OMBRE’s world premiere this week.

The significance is this: With the Arsht taking unprecedented financial and artistic leadership in this production, the public-private venue is cementing its commitment to a brand of imagistic, sensory-laden and non-traditional performance art that has been mounted in South Florida before, but not on this double-or-nothing scale.

The show opening for a seven-week run on Friday doggedly means to re-define theater as experiential spectacle, said Scott Shiller, the Arsht executive vice president who has shepherded the show as a hands-on producer since late 2012.

“Is this a nightclub? Is this 3D video? Is this theater? What we hope to do is tear down or at least blur the lines between traditional storytelling and something new and something current,” Shiller said Monday.

H2OMBRE is an hour-long event that puts performers and the audience together on the Arsht’s huge Ziff Ballet Opera House stage. Pichón Baldinu and Gabriella Baldini, founding members of the Cirque-like De La Guarda troupe from Argentina, have joined forces with Broadway director-choreographer Sergio Trujillo to meld circus aerialist work, modern dance, cutting edge music and a unique use of spraying water.

While H2OMBRE has a storyline of sorts, Shiller and company are pushing the form into a more subjective arena in which the audience freely interprets the visions more than when they process Death of A Salesman through their personal experiences.

This is due in part because the audience can move about on a dance floor next to the stage, choose how close to get to the watery action, spend the evening chatting with friends at tables ignoring the spectacle, even going to an adjoining bar, checking in and out of the performance at will.

“We have written a narrative, we have written character arcs, but it’s not all that important for us that the audience know the story by the end of the play,” Shiller said. “Ultimately, they are choosing their own adventure, creating their own experience. At the end, some people are going to understand the characters’ journey (as the authors envisioned it) and some people will come up with stories that are beyond our imagination.”

This isn’t just artistic blue-sky but a carefully thought out marketable approach that the Arsht has invested seven digits in. That has bought a piece of the worldwide rights and the dream of a multi-city tour through North America including Manhattan – and around the world as De La Guarda did.

It’s another step in Shiller’s campaign to mount shows that will bring in young audiences and whose wordless narratives make it accessible to the polyglot of Miami’s multi-ethnic population.

It certainly advances Shiller’s aesthetic. He has been instrumental in choosing the artistic content of the venue and especially the work that the organization invests in itself.

His fascination with “immersive theater” has been a hallmark of his tenure: “We really consider innovative programming our backbone,” Shiller said. “That’s one of the things we hope sets us apart from other performing arts venues, not just in South Florida, but in the nation. Our dedication to being an incubator and innovator is baked into our DNA.”

Toward that end, Shiller and the Arsht scheduled tours during the traditionally dormant summers of Cirque du Soleil-like shows like Pandemonium and Slava’s Snowshow in which stunning visuals and mimed action transcend language barriers.

During the snowbird season, the Arsht has financed local appearances of works mounted by the House Theatre of Chicago, which specializes in impressionistic if slightly more traditional dramas like The Sparrow and Death and Harry Houdini.

Finally, there have been the Arsht’s big bets: Fuerza Bruta in 2009 and The Donkey Show in 2012, which melded stage techniques with narrative storytelling amid a multi-media sensory blowout resembling a night of clubbing downtown as much as a theatrical undertaking. Both shows had been produced before, but the Arsht bankrolled significantly expanded and reworked versions. The Donkey Show that fused A Midsummer Night’s Dream with a South Beach vibe and Fuerza Bruta featured dancers cavorting in a shallow swimming pool made of transparent mylar above the audience’s heads.

The shows were described by the Arsht as financially “successful,” but the hope had been that the productions might have an afterlife. Some entities expressed interest in Fuerza Bruta too long after it closed to revive it. The costumes and sets for The Donkey Show remain in storage if someone’s interested. Its huge silver glitter ball – reputedly the largest in the world – hangs high above H2OMBRE’s lounge area.

But H2OMBRE ups the ante. The Arsht has fronted an undisclosed but hefty portion of the $1.8 million development costs and additionally is on the hook for the $230,000 a week operating costs for the seven-week run in Miami, Shiller said. A New York City venue is sending someone to scout the show and other industry types are being encouraged to check it out.

Whether all this works artistically, popularly or financially is a question prior to its opening. No one doubts that H2OMBRE will alienate some patrons who prefer traditional theatergoing. But the hope is that it will attract open-minded regular theater patrons and the adventurous non-theater customer who is intrigued by the concept.

Shiller didn’t go looking for H2OMBRE; it found him because of the Arsht’s reputation for non-traditional theater. In late 2012, Bladinu and Baldini approached Shiller. They spoke about a half-hour water-based show that they created in 2008 for a Spanish exposition  called Hombre Vertiente (Watershed Man).

“They said, “We think these characters have a larger journey and we want to create a new version of the show that would appeal to international audiences around the globe. But primarily we want to launch the show in North America and we need a partner who has a track record,” Shiller recalled on Monday.

Thus began the collaboration. Last summer, an expanded Hombre Vertiente was workshopped with audiences for two weeks with a producing partner in Mexico City and the newly-recruited Trujillo.

“The show had reached a crossroads. A part of the show wanted to be a traditional theater experience like with a proscenium and the other part would be an immersive experience with the audience sharing the stage,” Shiller said. His preference was clear. The first part was put in the trunk for a future date.

“We quickly realized it was really a completely new piece of art. So that’s when we knew it needed a new name, something that could translate internationally… . Most people in any language know what ‘hombre means’ and H2O is used internationally wherever you go,” Shiller said.

Over the ensuing year, the creative team met by phone to write a new show with storyboards created after each meeting to reflect the new ideas.

Shiller was so deeply involved that the team offered him co-playwright credit but he felt uncomfortable with that. He settled for the title “special creative assistance.”

The evolving production got a break when an Israeli company offered to pay for a workshop before audiences in Tel Aviv in January. Then the team fine-tuned the show in a warehouse in Argentina for four weeks before being shipped to Miami for three weeks of prep.

Although most of the cast and much of the large crew are not local, about 28 stage crew members from the Arsht have been involved building, installing and rehearsing the show in Miami. The production has posed uncounted technical challenges with its split-second melding of lights, music and water pressure. The opera house’s expensive stage floor and its mechanical equipment below had to be covered in two protective layers. As one supervisor said, “We learned with Metamorphoses (another Arsht show this season involving a shallow pool), water will go where it wants to.”

Trujillo, working in Miami for the first time, has never undertaken a project remotely like this. He’s better known for The Addams Family and Jersey Boys, and has four current projects including working with Gloria and Emilio Estefan on their upcoming musical On Your Feet.

But his enthusiasm choreographing the intricate dance moves is obvious and he has embraced Shiller’s vision and gamble.

“I know Scott is taking great risks here, but I feel this is where theater is moving.”

Caveat to patrons: The performing space has essentially two large areas: one is a dance floor bounded by two stages with audience members standing and dancing in the middle. They can get within inches of the performers. The other is a grandstand further away with seating and VIP tables. The latter area will probably stay pretty dry. But a not-very-dry-run for the news media Tuesday showed that if you stand on the dance floor, be prepared to get wet. How wet depends on how closer you are to the main stage, but think log flume ride. Patrons are advised to wear shoes and clothes that they don’t mind getting wet or bring a poncho. Seriously. We warned you about the water. Medium and large handbags and backpacks are not allowed inside. Small backpacks and cross body handbags are acceptable at the discretion of the House Manager. Bag check is available in the lobby.