Theater Community Joins For 24 Hours To Support Special Cause 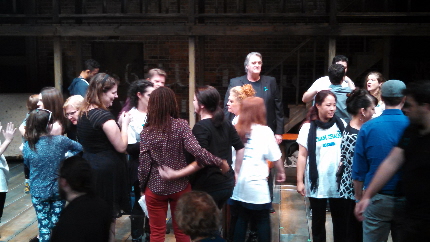 After the curtain call at the 24-Hour Theatre Project

The eighth annual 24-Hour Theatre Project on Monday had a slightly different vibe to it with everyone on stage and much of the audience wearing tiny teal ribbons representing the fight against cervical cancer.

Technically, the effort to write, cast, stage and perform ten-minute plays in 24 hours was, as usual, a fundraiser for Naked Stage, a small theater performing at Barry University.

But Naked Stage cofounders Katherine and Antonio Amadeo pledged all the proceeds this year to be donated toward the medical expenses of beloved theater supporter Dana Castellano, who is in hospice with stage 4 cancer.

“We wear this ribbon because no one fights alone,” show producer Katherine Amadeo told the crowd at Palm Beach Dramaworks, which donated its house and staff to the one-night-only effort.

The curtain call is the highlight of every edition of the 24-Hour Theatre Project when every actor, writer, director, stage manager, crew member and volunteer – scores of people — crowd the stage in a throat-catching moment of a community bonding. This year, most wore a T-shirt emblazoned with “Team Chaos,” the name of the group started by Castellano to fight cancer.

The quality of the evening of mostly comedies varied, as always, but the energy and imagination were winning. The event also gives actors, director and playwrights an opportunity to dabble in each other’s fields.

The playlets in order of appearance:

May Divorce Be With You, written by Island City Stage resident director Michael Leeds, directed by Margaret Ledford, stage managed by Shonna Rash.

Niki Fridh was an aggressive marriage counselor whose advice to troubled couple Christina Groom and Joe Kimble was more destructive than helpful, egged on by the counselor’s acerbic daughter Michelle Brino. A key giveaway was when her first probing question was to ask each partner, “What do you despise in your partner?”

What starts out comic ends in a quiet tragedy as relationships deteriorate among four people communicating primarily through Twitter rather than face to face connections: Nanique Gheridian as a technological newbie mother, Ann Marie Olson as her daughter the college student, Amy McKenna as her teacher and Skye Whitcomb as the teacher’s husband always away on a sports journalism assignment.

A farcical meeting in which a pregnant Julie Kleiner (in the script and real life) asks the blessing of her crotchety invalid mother Sally Bondi for her impending marriage to Meredith Bartmon while the German nurse Lourelene Snedeker looks on. Bondi was especially funny turning her rubber face inside out and backward with tortured expressions of amazement, anger and disgust.

One of the funnier and most bizarre pieces had demented Margot Moreland trying to cure two new zombies Rick Pena and Laura Hodos by treating them at the Zombie Summer Stock Theater – meaning that they are being taught Broadway show tunes. The sight of heavily made-up Hodos and Pena in each other’s laps crooning Sweeney Todd’s “Not While I’m Around” was hysterical. Josh Stoughton played Hodos’ husband who wants her to sign over their property since she’s now a member of the undead.

An offbeat tale in which criminal Nick Duckart returns to an isolated cabin to retrieve his booty, but finds a strange family –Beverly Blanchette, Jeni Hacker and Pierre Tannous – trying to recover from personal reverses.

An imaginative comic book/fairy tale mash-up in which the grown up Pinnochio (Matthew Korinko) has grown up in an orphanage with Alex Alvarez and Troy Davidson. He is now searching for his father again, stymied by the witch who turned him into a boy, Tracey Barrow-Schoenblatt.

Perhaps saving the best for last, a hilarious piece about two idolizing fanboys, Clay Cartland and Adam Simpson, meeting their hero Dave Corey, the star of a TV space series at a third-rate science fiction convention. The washed-out actor is long ago burned out on the adoration from such fans able to repeat every line from every episode. Sabrina Gore played the actor’s daughter and publicist. Simpson and Cartland were uproarious in their deadly serious repeating of the Holy Writ from the show’s script, each mantra accompanied by ridiculous poses. And while very funny, McKeever found a touching way to end the piece.