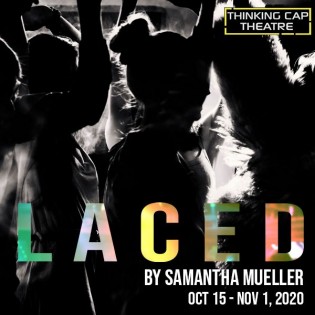 Far from succumbing to fiscal and virus nightmares, Thinking Cap Theatre has been spurred by the intersection of politics and art to resurface this month with three online productions whose relevance resonates with this exact time and place.

The Fort Lauderdale company entering its 10th season has been wrestling as all theaters have with the crippling closures due to COVID-19. But it had been seriously crippled by thousands of dollars in revenue needed for operations being withheld by a ticketing agency being sued on behalf of 500-plus clients seeking millions of dollars.

The troupe led by Producing Artistic Director Nicole Stodard and Managing Director Bree-Anna Obst took the summer to regroup and, with financial aid of outside groups, has resurfaced with three shows: the politically-charged Laced, which was supposed to be mounted live in this time slot, and two other plays meant to celebrate the 100th anniversary of women’s suffrage: Meet the ‘Gettes and A Baby, A Birdcage & the Ballot Box.

Samantha Mueller’s Laced is set on the eve of the 2016 election at a woman-owned, queer bar in Tampa where a hate crime has just occurred.

“The play’s resonances with the disturbing state of the nation and the imminent election have compelled Stodard and Obst to work that much harder to ensure that Laced be performed as scheduled,” their news release stated.

With some assiduous hustling, the theater’s Get Out The Vote (GOTV) Theatre Initiative was made possible by a fiscal life raft donated by Dolphin Democrats, Human Rights Campaign, Our Fund, World Aids Museum, Arts Proud, National Center for Lesbian Rights, Ignite Community Services and Thou Art Woman.

“The alignment of this play and these partnerships at this moment represent a powerful convergence of art and politics. We are all vested in effecting change and getting out the vote,” said Stodard.

The play directed by Stodard centers on Minnow (Angelina Lopez de Catledge), Cat (Jordan Patriarca) and Audra (Stephon Duncan) amidst the debris of a terrifying incident. Over the course of the play, which alternates between the moments just before and just after the hate crime has occurred, the characters bare their souls as they struggle to understand, clean up, and move forward. Themes include confronting discrimination and injustice; giving voice to the most marginalized members of LGBTQ+ Community; practicing and championing self-acceptance and empathy; rebuilding and triumphing after tragedy; exercising your rights; and modeling hope and resilience.

The prerecorded edition of Laced will be livestreamed at 7:30 p.m. October. 23, 24, 25, 30, 31 and November 1.  The 75-minute production will be accessed on a web page whose link will be sent to participants. It will be followed by a live talkback on Facebook open to everyone. Tickets are $17.50 for an individual, $25 for a couple and $50 for a watch party of three or more people.

Additionally, the theater had planned long before this virus to honor the 100th anniversary of women nationwide heading to the polls to cast a ballot for the president. The 19th Amendment, which officially granted suffrage to women in the U.S., was ratified in August 1920.

Meet The ‘Gettes (as in the rock group “the Suffragettes”) is described as “a playful tribute to the pioneers of the 19th amendment will (re)introduce audiences to ten leading figures of the women’s suffrage movement. With an original script that interweaves primary historical documents and contemporary insights, Thinking Cap’s team of artists will use dramatic storytelling to bring to life Lucretia Mott, Elizabeth Cady Stanton, Susan B. Anthony, Frederick Douglass, Sojourner Truth, Lucy Stone, Ida B. Wells Barnett, Mary Terrell, Alice Paul, and Cathy Chapman Catt.”

The one-hour show will be presented online at 2 p.m. October 24 and Nov. 1 and be followed by a talkback.

A Baby, A Birdcage & The Ballot Box is a reading of two suffrage propaganda comedies with a wry sense of humor written early in the last century. A Suffragette Baby (1912) by Alice C. Thompson and The Parrot Cage (1914) by Mary Shaw were privately printed and originally intended for amateur performances at home.

The one-hour show will be presented online at 7:30 p.m. October 27 and Nov. 2 to be followed by a talkback.

Thinking Cap’s survival as a troupe with a modest cash flow was endangered during the pandemic by the refusal of Brown Paper Tickets, a Seattle firm, to hand over “thousands” of dollars in ticket receipts, Stodard said.

The Florida theater is hardly alone. The Washington state Attorney General filed a lawsuit in September claiming Brown Paper Tickets owes $6 million to event producers who were never paid their box-office revenues and $760,000 in refunds to people who bought tickets for events that were canceled because of the COVID-19 pandemic, according to Seattle newspapers.

Nearly 600 artists and arts groups from coast to coast either didn’t receive money, or checks bounced, or, in one case at least, money was deposited, then got sucked back out of bank accounts, the newspapers reported.

This entry was posted in News and tagged Bree-Anna Obst, Nicole Stodard. Bookmark the permalink.