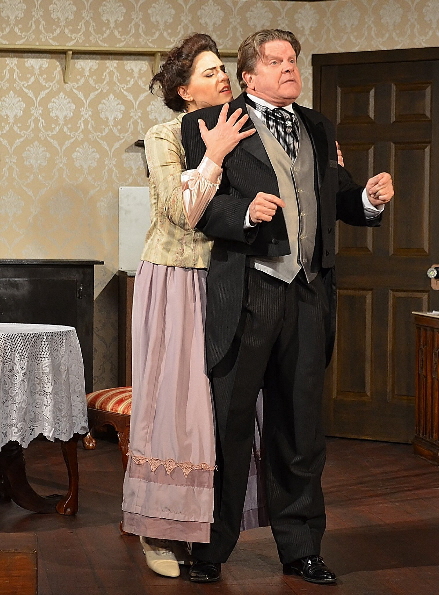 “Don’t underestimate the power of a glimpse of lingerie.”

If The Underpants were a movie, this line would be in the trailer. It’s spoken by Theo, a government functionary in a state of panic, to his wife Louise, in the play’s opening scene. We’re in Weimer Germany, and Louise has just suffered a wardrobe malfunction at a most inopportune time—in the town square, during a parade for the king. Her panties had inexplicably fallen to her ankles.

It was just for a split second, but it’s enough to send Theo into a conniption, fearing embarrassment, ridicule, even the loss of his job. It also incites a pair of amorous boarders to Theo and Louise’s modest home (they happen to have a room for rent), each of them hoping to be in the right place the next time Louise’s undergarments succumb to gravity.

All from a glimpse of lingerie, eh? Conjuring the lowbrow folderol of an early 20th century burlesque, Steve Martin’s adaptation of this 1910 German sex comedy is all too quaint for our hedonistic age, with our ever-loosening broadcast standards and our debauched president.

There are visual gags and double entendres about the consumption and slicing of phallic German meat, the inevitable deployment of the metaphor “beat around the bush,” and witless chestnuts about flatulence, diarrhea and untimely erections. One character, an amorous new boarder at Theo’s house hoping to see more of Louise, assures her husband that, “I’ll slip in and out without you knowing.” It’s about as risqué today as a Mae West bon mot, but at 12, I might have found this the pinnacle of comic subversion.

Main Street Players’ industrious production honors this work the best way it can, by embracing its abrasive frivolity. The play is seldom funny, but it’s through no fault of the cast, which, despite the occasional opening-night line flub, sells the material with animated zeal. Appreciation of this production’s craft depends in large part on separating it from the stultifying material.
As Theo, Michael Fernandez performs a tightly controlled parody of preening, misogynistic, bigoted machismo. All bug eyes and wild gesticulations, he adopts the expressionist movements of a silent-film actor, overselling everything to the point of exhaustion. Paired with a scratchy voice fit for a Warner Brothers cartoon, this interpretation takes a minute to get used to, but ultimately Fernandez’s full-bore immersion into the absolute inanity of it all seems the only appropriate response.

The same can be said for Anthony Wolff in his admirable professional debut as Benjamin Cohen, a sickly, secretly Jewish boarder with his watery eyes set on Louise. Wolff never lets us forget about his character’s unspecified illness; his performance is an unrelenting torrent of sniffles and sneezes and coughs. When tricked into consuming a sleeping potion—it’s that kind of show—he showcases deft physical comedy in his response, his legs turning to Jell-O and his arms flailing numbly. Harold Lloyd would be proud.

Steven Chambers and Murphy Hayes contribute solid, consistent support, the former embodying a foppish poet also vying for Louise’s love, the latter as a straight-arrow scientist who appears late in the show.

It’s fitting that in a world of male screwballs, the women are the smartest characters in the room—and the most Machiavellian. As Gertrude, Theo and Louise’s upstairs neighbor, Lucy E. Nunez skillfully evokes a mischievous, sexually fluid voyeur, her actions suggesting an unspoken yen for Louise.

But it’s Sheri Wiesman who is the brightest discovery here. In her professional debut as Louise, the recent New World graduate anchors the show as a trapped housewife gradually emerging from her marital cocoon and—if only for a spell—asserting her autonomy. Patient, stoic, dryly comic, with embers burning and gears grinding just below the surface, she’d make an ideal Ibsen heroine.

Director Danny Nieves, in addition to striking the right vaudevillian tone from his actors, paces the show with comic timing at the forefront. Yet The Underpants remains a slog to sit through, in part because there aren’t enough zippy surprises and slammed doors to qualify it as an effective farce, and because its emotional tenor would insult many juveniles. It’s frankly painful to acknowledge that a genius like Martin adapted this.

Comedy, of course, is subjective. The opening night audience, albeit composed largely of friends and supporters of the cast and crew, ate this show up with ravenous fervor. But what I experienced was a well-mounted script that is, to paraphrase Martin’s old stomping ground, not ready for prime time.

The Underpants runs through Oct. 22 at the Main Street Playhouse, 6766 Main Street, Miami Lakes. Show times are 8 p.m. Fridays and Saturdays and 2 p.m. Sundays, with a special 5 p.m. show Oct. 8. Running time is two hours with a 15-minute intermission. For tickets, visit mainstreetplayers.com.