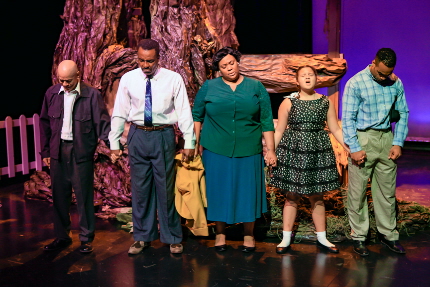 When the audience walks in, the dominating vision is of The Tree. Reaching more than two stories and occupying nearly half the stage, its impossibly gnarled bark seems to be melting from its century-long history. Its branches loom like the undulating arms of an octopus. But when Billie Holiday’s mordant crooning of “Strange Fruit” wafts over the scene, the branches take on a different aspect.

It is a theatrical masterstroke from writer-director Layon Gray that opens a stirring Meet Me At The Oak, posting yet another strong offering for a revitalized M Ensemble which gifted us recently with Seven Guitars and God’s Trombones.

The Tree provides a tactile and emotional backbone for the Richard family living adjacent to it in rural Louisiana in 1955. The family patriarch remarks that it had withstood “everything that Mother Nature could throw at it,” but something far more threatening is coming.

Descended from slaves working this land, the salt-of-the-earth family has thrived enough to buy a modest home and build a life over a half-century: grandparents Jonious and Selma caring for 11-year-old granddaughter Ruthie while her widowed father Junior is in the big city studying in college. Their extended family includes Jonious’ lifelong running buddy Luther.

The family has always gathered at the tree on the third Sunday of every month to sing and pray for the souls of Jonius’ great-grandparents who were lynched from its branches. We will learn later that the tree has an even darker, more extensive history for the community at large.

But life in this “colored neighborhood” is upended when a white family, the Beaudoins, move in on the other side of the tree – Mary; a nurse; Stephen, a factory worker displaced by an African American; Katie, their small daughter, and Lou, an aggressively racist cousin. As Jonious remarks with well-stoked suspicion “Something not fit right.”

When a fatal tragedy between the two families erupts because of the tree, Deputy Earl Mouton has a writ to chop down the tree. A firestorm of anger, resentment, and racial divide explodes, poised to immolate everyone and everything. To paraphrase Chekhov, if you put a child’s jump rope in the first act, it better be used in the second another way.

This was the first script written by Gray, who later wrote Black Angels Over Tuskegee and The Kings of Harlem, an acclaimed hit for M Ensemble in 2017. As with the latter, Gray has a clear vision that integrates acting, staging and a deft melding of other artists’ set design, lighting and costuming into a single piece of theater.

This production is not perfect: Some actors are stronger than others, some moments fly by too quickly for the audience too soak in, enunciation is a problem for some actors despite crucial information needing to be communicated through the dialogue.

But those concerns evaporate in the powerful depiction of an African American family during the earliest cusp of the civil rights movement trying to cope with evolving expectations about coexistence among divided races scarred by a violent history.

Some developments can be seen coming as clearly as in a Greek tragedy, but Gray has inserted insightful moments specific to the changing times such as when the older generation Luther says to 20-something Junior in abbreviated slang, “’Member?” To which Junior smiles to correct his countrified pronunciation, “You remember?”

The play may stumble occasionally, but scenes soar when depicting family solidarity and pride lubricated with witty banter and love. A key example occurs early on when the Richards and Luther break into a joyous mimicking of the second line dancing they saw at a funeral that day, complete with waving hankies and umbrellas, and with bodies exuberantly writhing and voices rising as the record player spins out “Jambalaya.”

Perhaps the finest passage comes as Jonious retells, as he has scores and scores of times, the history of the tree. Actor Allan Louis exudes 500 watts of pride as he settles in to regale his receptive family with the details they know so well. The storytelling is in itself a treasured tradition. But as the arc of the story eases into tragedy, the lights on the home darken and Jonious steps over to a spot of light near the tree where the names of his murdered ancestors have been carved. Louis’ mien changes and the actor makes it clear how the tree and its history have become the marrow of the family.

Later, when the pre-teen Ruthie tries to console Jonious about the probable destruction of the tree nicknamed Ben, she says, “It wasn’t for nothin, Papa. It’s our history. If they cut Ben down – we still have the memories. Remember -you told us that story ova a hunda times. If I change my mind `bout like’n boys, I might get married, and then I can tell my children the story, and WE can meet at the oak. In our mine. All we would have to do is imagine that Ben’s still there. How ’bout that?!”

Under Gray’s tutelage, the cast creates a palpable chemistry and inhabits these characters, who tease and admonish each other. M Ensemble regular Brandiss Seward is the loving supportive Selma to Louis’ gruff but protective Jonious. Gil Tucker injects humor and life anytime he appears as Luther. Scott Wesley is the visiting-home-from-college father Junior who instantly convinces audience of his bond with daughter Ruthie, played by Lily Grace. Presa Hall is the white wife trying to reach out to her new neighbors, Stephen Kaiser is her troubled husband, Mia Francesca Martinez is their daughter, J.J. Abujasen twirls his moustache as the racist kin and Paul Thomson plays the compassionate lawman.

Gray is skilled at subtly creating stage pictures with the aid of fine lighting by Eric Nelson on the set by Mitchell Ost with Miriam Sierra and Jessica Diaz.

But a notable strength is how he weaves in music – having the family sing gospel hymns, Zydeco and pop numbers — and providing substantial original underscoring that heightens moods.

Meet Me At The Oak prevails as an often moving evening of theater.