Love Among The Seniors: The Last Romance At Riverside 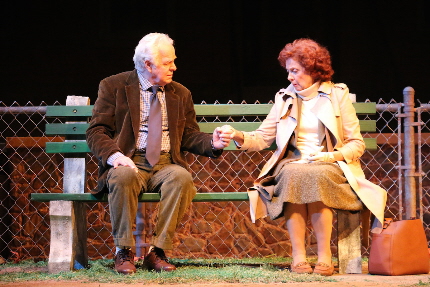 Riverside Theatre serves up the sentimentality with a ladle in its production of The Last Romance.

Written by Joe DiPietro, the play concerns a trio of senior citizens struggling with loneliness. An 80-year old man falls in love with a woman and his sister interferes. A cynical eye would say it’s a triangle born out of need rather than love. But rather than considering the negative, DiPietro’s two-act play delves into the human condition of growing old.

It seems as if we are growing up with this playwright.

First, to quote his best known work, we were told that we were perfect but that we had to change in order to maintain our young marriage. Then we went over the river and through the woods to visit our aging grandparents, to quote his first success. Now, we are those aging grandparents struggling with loneliness and whispers of what could have been.

For sure, a play about two senior citizens falling in love is sentimentality on steroids. It brings as much “awww” as bringing a cute little doggie on stage, which also happens in this production. Whoa, whoa… not that there’s anything wrong with that. Sentimentality is too derided in our sophisticated society. Where would we be without heart?

There are also plenty of laughs in this production thanks to actor P.J. Benjamin. He disappears into his role of Ralph Bellini, a widower who lives with his sister, Rose, in an Italian neighborhood of Hoboken, New Jersey.

Benjamin brings a rich, well-rounded portrayal to Ralph. You won’t be surprised if you read the program: Benjamin had 3,500 performances as the Wizard in Wicked on Broadway and on tour. While his Ralph is full of life, Benjamin brings a nice layer of sadness as well. Sixty-year old memories of losing an opportunity to sing at the Met haunt Ralph. He’s lonely but funny — a lovable grouch who, at the beginning of the play when his sister annoys him, repeatedly calls out “Madonne” – the first time the one word is a complete sentence,  the second time, it’s a paragraph, the third a 1,000-word essay.

But that doesn’t stop his sister. She’s just happy he’s “not dead in the gutter.”

Portraying Rose is the ever-excellent Andrea Gallo, who nearly stole the show as the French maid in Riverside’s 2017 production of Private Lives. Here, she serves up love laced with irascibility, especially when she calls out to the dogs to “shaddup.” At first, we think she’s just feeling protective over her older brother when she sees him on a park bench talking with a strange woman, Carol. Then, we realize she’s also afraid of losing her only link to family. In Gallo’s hands, the truths we learn about Rose tug at our hearts as much as the budding relationship between Ralph and Carol.

As portrayed by Broadway, off-Broadway and regional theater veteran actress Louisa Flaningam, Carol traverses a wide spectrum. When she first meets Ralph, she has come to a dog park to walk “Peaches,” her Chihuahua mix. At first suspicious of this strange man, Carol eventually warms to him and we cheer for the possibility of a “last romance.” Flaningam and Benjamin are real-life husband and wife, so their warm, easy connection is very convincing.

A fourth character is the Young Man. He is played by Colten Blair, an up and coming performer who has toured with “The Sound of Music” and sung opera professionally. It’s the Young Man who steps in and sings operatic interludes…and oh, with such regal beauty and earnestness. He also serves as clever onstage dresser for Ralph, helping to change scenes and settings.

From the believable characters to the polished stage efficiency, director Chris Clavelli, resident director at The Florida Repertory Theatre in Fort Myers, brings warmth and soul to this production.

His designers, Ray Recht (scenery), Susan Mickey (costume), Todd Wren (lighting) and Trevor Peters (sound) work in wonderful harmony here. Just as the writing and performances easily move us along the storyline, so too do all these technical elements. We see a tree-lined street with an autumn canopy of leaves, all oranges and reds…  like Carol’s hair. Suggesting movement of time, a leafy shadow stirs against the exterior of the brownstones. Carol’s brown boots in her first scene are as stolid and rooted in place as are the tree trunks; neither she nor those trees are moving anywhere. And a sweet sound design of occasional yapping dogs make you feel like you are in the midst of this park.

Yes, a conflict does arise. It may make you want to pull out your hair when DiPietro has Rose intone “October 25” a few times, suggesting its looming nature just to discover… meh. And you’ll end up wondering “who” (or “what,” for the more philosophical) the villain was in the story. It makes for a good post-theater conversation.

For sure, if tenderness mixed with melancholy and humor and all ratcheted up with a “will they, won’t they” urgency is your idea of good theater, then The Last Romance is your cup of chamomile.