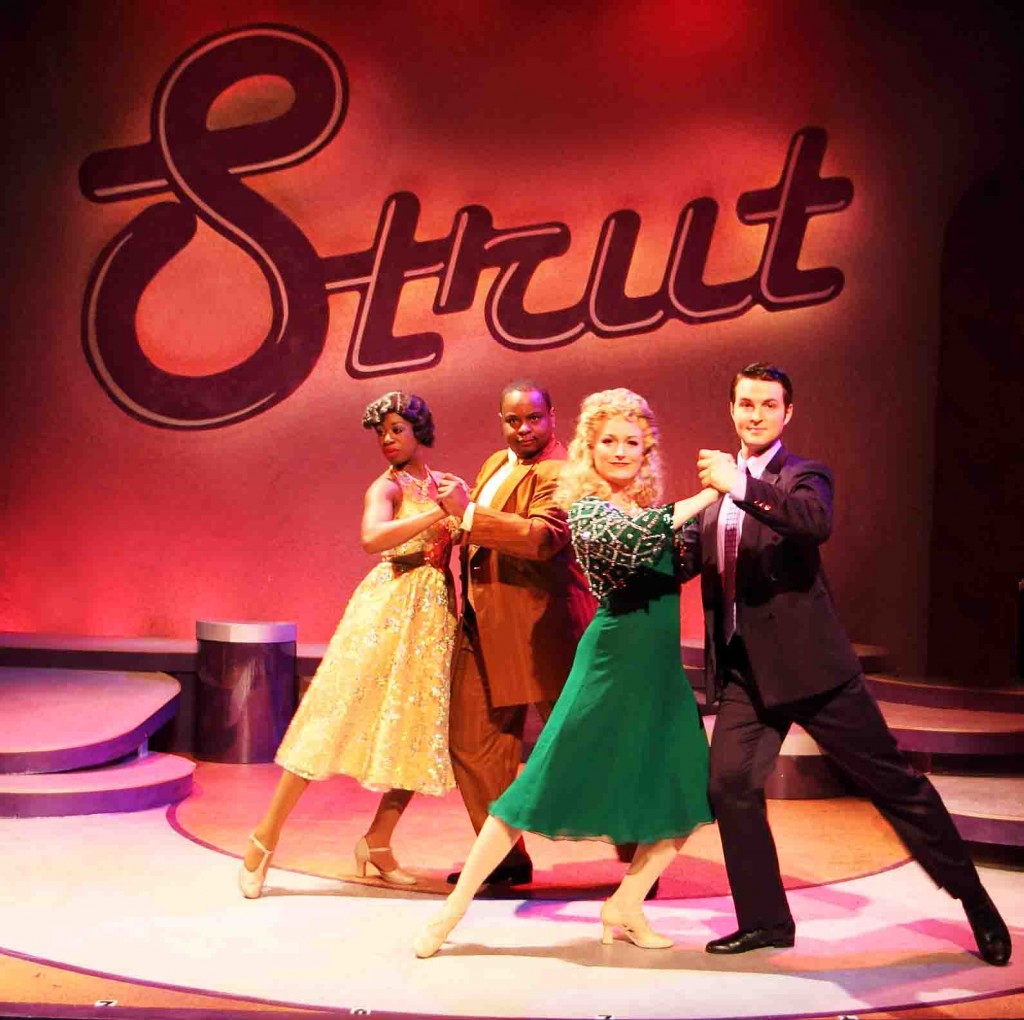 If you think time machines are only found in science fiction, visit All Night Strut at Broward Stage Door and watch an audience of Greatest Generation grads be transported back 65 years to the marrow of their youth.

Their feet tapped and their voices murmured along as four singer-dancers and three musicians wove drumhead-tight harmonies on nearly 30 standards of the ’20s, ’30s and ’40s.

This pure revue – no lines, no plot – may even sound better than the listeners remember because of the expressive, heartfelt performances of the cast.

For instance, Christopher George Patterson’s mournful rendition of “Brother, Can You Spare a Dime” brings out the pathos inherent in a Depression Era song that often is tossed away. Similarly, Rose Kathryn Ouellette’s “White Cliffs of Dover” becomes a wish for the restoration of a world that she knows will never return. Danielle Famble comes close to breaking hearts with “I’ll Be Seeing You” and Matthew Varelia does exactly that on “As Time Goes By.”

For a quartet of performers whose parents likely weren’t born when these songs were popular, they deliver the era’s optimism and energy from the very opening number, a driving “Chattanooga Choo Choo.”

Director Dave Campbell has given them fluid choreography as well. The four swing, swivel, sway and shimmy through both acts. While all of them move well, Patterson (a Stage Door alumni of The Hot Mikado and Five Guys Named Moe) is an audience favorite with his percussive tap dancing.

But the group may be at its best in the creamy vocalese harmonies – very reminiscent of Manhattan Transfer – on such numbers as “A Nightingale Sang in Berkeley Square” and a sloe gin fizz “Tuxedo Junction.”

The singers benefit from a live trio consisting of Musical Director David Nagy on keyboards, Julie Jacobs on drums and Rupert Ziawinski on stand-up bass with some scatting thrown in. A highlight is when all seven performers jam on “In the Mood” that reminds you what an infectious blast the song can be.

The show conceived by Fran Charnas respects the works as more than tunes on a jukebox. For instance, she presents most of the songs complete with their rarely-performed introductory set ups, which then slide into the familiar verses and choruses.

The songbook benefits hugely from the champagne arrangements by Tom Fitt, Gil Lieb and Dick Schermesser who keep enough of the original concept that the tunes will spark memories among the audience members, but also re-imagine them so that they feel unusually fresh.

Just as Sarah Kane’s dystopian dramas aren’t for everyone, All Night Strut may be a just a shade too much of a good thing for anyone born after Pearl Harbor. But for the target audience, this is an enchanting return to forever after.

This entry was posted in Performances, Reviews and tagged All Night Strut, David Nagy. Bookmark the permalink.