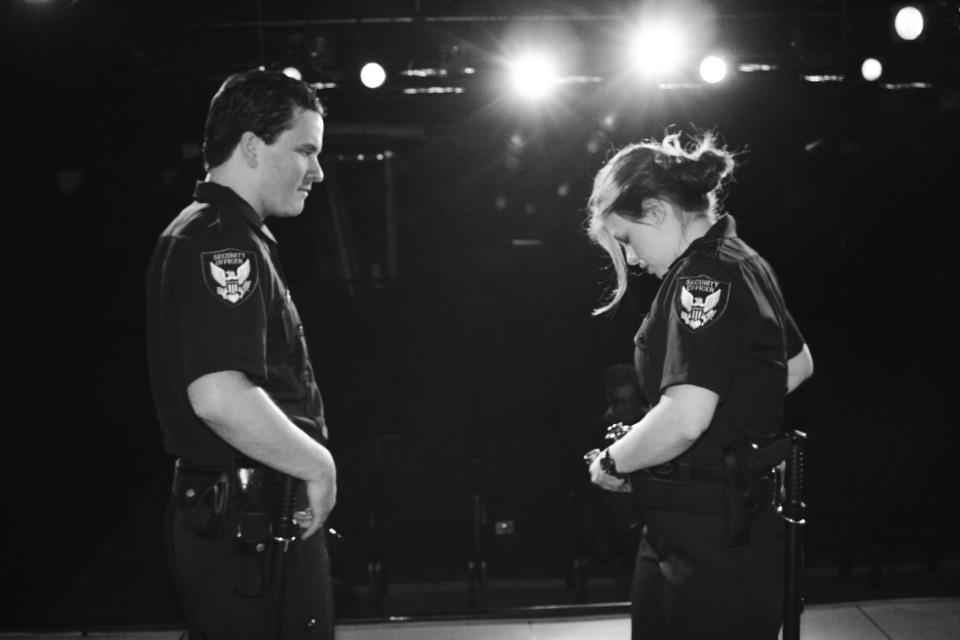 Lobby Hero is about character.

Character is who we are and what we do when facing choices that have repercussions for us and the people we are connected with.

But unlike fairy tales in which heroes effortlessly find the courage to do the right thing, we in the real world know pain and damage are not abstractions, but profound consequences that often paralyze us into rationalizations and inaction.

All four characters in Kenneth Lonergan’s masterwork are caught in their personalized vises with no painless alternatives. Most yearn, as we do, to do the right thing. But knowing what that is and having the fortitude to follow through are at the crux of Alliance Theatre Lab’s engrossing production.

Under Adalberto Acevedo’s direction and the work of a strong cast, Lobby Hero becomes a compassionate examination of ordinary flawed human beings struggling to do the right thing as their personal code dictates, sometimes decisively making choices, sometimes stumbling into them – and invariably suffering for those choices no matter how “right” the choices may be. The empathy derives from watching these people earnestly stumbling around  in the dark looking for the light.

Oh, and it’s terribly, terribly funny thanks to Lonergan’s creation of his central protagonist, Jeff, a woebegone Everyschlub we can relate to all too well, played to hilariously quirky perfection by Mark Della Ventura in what we’ll argue is the best work we’ve seen him turn in.

Lobby Hero focuses on Jeff, a 27-year-old lovable loser who is fighting to break his string of bad luck that you suspect may be partially chance and partially self-inflicted. For instance, he was drummed out of the Navy for smoking weed on guard duty. After an aimless life of half-failures, Jeff has finally clocked in nine months at this job – front desk security guard at a relatively prosperous Manhattan apartment building.  Jeff is the kind of voluble nebbish whose hyper-articulate mouth is forever stepping over boundaries. He must love the taste of shoe leather.

Still, there is a clear metaphor in the title of a man who is outside the real world waiting – or hiding .

His supervisor William (Mcley Lafrance), a self-made man of strict integrity, is trying to help Jeff find his way. Williams knows Jeff is capable of more than spending his life working the lobby until someone calls him “Pops.” But William is faced with the prospect of having to lie to protect his brother who is accused of murder.

Enter the morally corrupt veteran street cop Bill (David Michael Sirois) in tandem with his adoring probationary rookie Dawn (Anne Chamberlain). They have, to put it mildly, a complicated relationship which begins to sour when a smitten Jeff tells her that Bill stops off in Jeff’s building regularly to visit a woman of easy virtue.

They are all people in transit, torn in various configurations between wanting to have dreams and not trusting life to give them a fighting chance to deliver on them.

Lonergan weaves together their individual crises into one Gordian knot to which the hapless Jeff reluctantly holds the knife.

The New York Times critic Christopher Isherwood recently argued this script may be the finest drama of the first decade of the century. Indeed, for all the laughter – and there is a lot of  it in watching someone like us repeatedly stubbing their toe in their social interactions – for all that, this is a serious work examining the feasibility of integrity in the modern world.

Lafrance is serviceable enough as the supervisor trapped between his own inflexible integrity and familial loyalty, although he was still not comfortable with his lines in the second week of production.

The winsome Chamberlain is completely convincing as a lovely woman trying to be taken seriously for her own merits and who hides a vulnerability inside the tough veneer she believes she needs to survive the gritty streets and the male-dominated world of police politics. We hope we’ll see a lot more of her work in coming seasons.

Sirois was simply stunning. Unlike the charismatic slacker in his Brothers Beckett, Sirois’ cop is all entitled arrogance and swaggering confidence. The performance never seems like a caricature, and yet, if you’ve seen Sirois in other roles, it will floor you how he has transformed himself into a toxic menace that leaves a slime trail behind him.

And last, only because we’re saving the best for last, is the rubber-faced Della Ventura who inhabits someone smarter than everyone in the room, but fatally inept in dealing with people. Physically, he has that doughy face, unruly mop of hair, hang-dog expression in the eyes and an endearingly goofy, sad smile that says Jeff has seen enough disappointments to expect nothing different in the future. Della Ventura has mastered Lonergan’s arias of uncontrolled verbal effluent, always ending with a clumsy emotional faux pas. His Jeff is not just uncomfortable in his own skin, but in his own life.

All these performances have been guided by Acedvedo with dead solid pacing. He is especially adept at invisibly moving people around the tiny stage to give the illusion of action when, in fact, it’s just people standing around talking to each other.

With virtually no money, Acevedo also has designed his best set yet: A recognizable apartment lobby right down to the walls adorned with little touches of verisimilitude such as a no smoking sign, generic art print and fire alarm.

Following the consecutive successes of Brothers Beckett, Fool For Love and ‘night mother, this production of  Lobby Hero cements Alliance’s reputation as a company to go out of your way to take a chance on seeing.