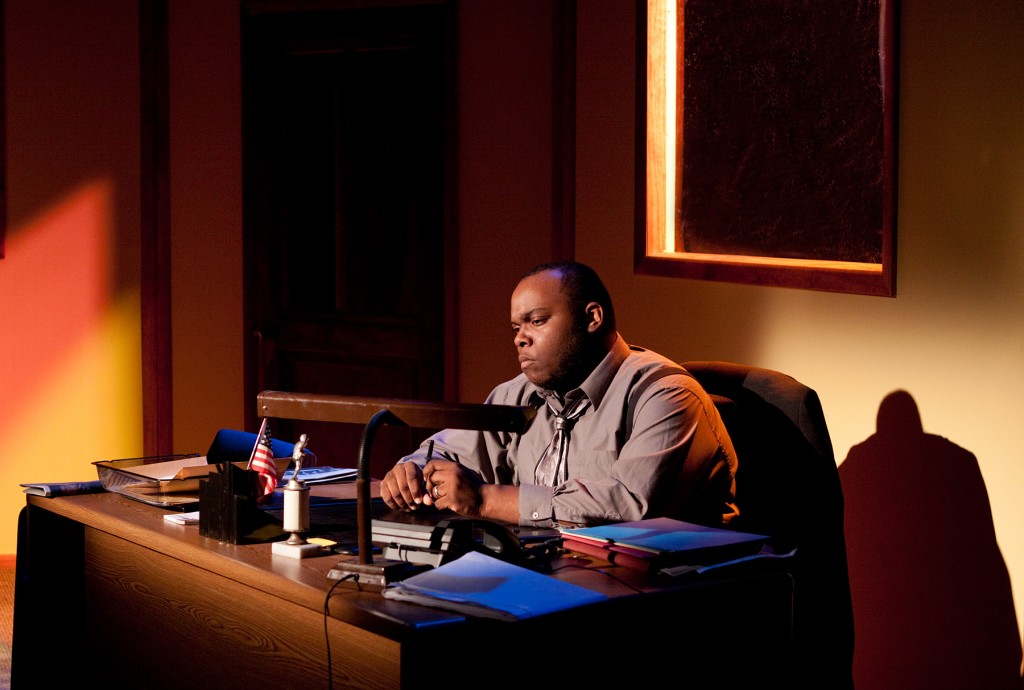 There’s something richly poetic about sitting in M Ensemble’s new “home” at The Light Box at Goldman Warehouse in Miami’s Wynwood Arts District while watching a play about the maneuverings behind redeveloping a blighted neighborhood.

M Ensemble moved into the performance space last June, and makes good use of the comfortable black-box theater for the first presentation of its 40th anniversary season, August Wilson’s Radio Golf.

In the capable hands of artistic director John Pryor, playwright Wilson’s final installment in his monumental 10-play cycle about contemporary African-American life, finds a true voice ― actually a chorus of them ― in the struggles one faces when the past and future collide.

Set in Pittsburgh in 1997, Radio Golf is the last play Wilson wrote a few months before his death in 2005. The sole setting of the play is the small office of the Bedford Hills Redevelopment Agency. Harmond Wilks (Don Seward) shares the space with Roosevelt Hicks (William Barnes). It’s stark, with two desks, file cabinets and a photo on Hicks’ side of golfer Tiger Woods mid swing (during a time when Woods was an American hero) and, near Wilks’ desk, a picture of Martin Luther King.

Both men have much at stake over a redevelopment project they’ve spearheaded that will give the Hill District neighborhood a ten-story modern apartment building with ground floor retail. The store tenants are significant because they are icons of an upper middle class society: Barnes & Noble, Starbucks, and Whole Foods. For Wilks, the redevelopment will be a substantial coup for his political career as he’s on board to become the first black mayor of Pittsburgh. For partner Hicks, an upwardly mobile bank vice president, the high-profile building will get him a step closer to “a seat at the table” and on an equal playing field at the country club. The satirical title refers to a radio show that Hicks hosts about golf as a minority partner in a radio station; his detractors say he is a pawn used as a “front” for white investors.

To get the green light to build, however, the city must designate the neighborhood blighted in order for the Agency to get federal money. When the call finally does come, it’s cause for a celebratory dance, one the two men shared growing up in the neighborhood. “Blight! Blight! The gang’s all here!” they chant as they dance.

Everything appears to be on track, including yet another success story that hinges on the outcome. Mame Wilks (the always incomparable Carey Hart), Harmond’s put-together public relations wife, is being tapped as press manager for the governor of Pennsylvania. For outward appearances, however, the governor’s office and she have agreed to wait until her husband’s campaign is over and the redevelopment is in place to announce her new job.

As Irving Berlin’s song “Blue Skies” plays and all is sunny on the Hill, an obstruction to the plan arrives when Elder Joseph Barlow (Andre’ L Gainey) stumbles into the office. At first blush, it appears he has shown up at the wrong place looking for a lawyer, but as the spool begins to unravel, it’s clear that this is no chance arrival. Ol’ Joe, as he’s known, is at the agency to talk about the historic house his family has lived in for decades. His daughter, the next generation to own the home, wants to move in, but the structure is in the middle of the redevelopment parcel and is on target for demolition any day. Bedford Hills Redevelopment has taken over ownership of the house because back taxes have not been paid, but there’s more to the story and the plot’s thickening is sure to threaten everyone’s well being (cue soap opera music).

Adding fuel to the fire is an ex-con turned house painter (Keith Wade as Sterling Johnson) who has joined in the fight to save the historic house at 1839 Wiley Street, a street address significant in Wilson’s Pittsburgh Cycle. In Gem of the Ocean, chronologically the first play in the cycle but produced just prior to Golf, the house was occupied by a 300-year-old survivor of slavery who had witnessed all of American black history; here she’s Ol’ Joe’s Aunt Ester. In Golf, the significance of the house forces Wilks to look back not only at his own heritage, but all black history. Should he preserve the past or dismiss it in his quest for power? (Cue soap opera music again. In the production, the theme “Blue Skies” drifts in and out during soul-searching and dramatic moments.)

The drama has an ending that plays like a soap opera cliffhanger, leaving the audience wondering what might happen next for Wilks, Hicks and the rest of the Hill gang. Some people have said the play feels unfinished due to Wilson’s untimely death and that it may have undergone some further revisions had the playwright lived to see it through the process from page to stage. Yet, at M Ensemble, Pryor’s quick pacing and each of the cast’s members ability to inhabit their characters never allows any weakness (if there ever could be one in a Wilson play) to show through.

The part of Wilks, on Broadway and in other productions, is usually portrayed by an actor who is meant to evoke the feel of a Barack Obama. But the shorter, stouter Seward as Cornell graduate and mayoral hopeful Wilks brings a different sensibility to the role. Still serious in his “Hold Me To It!” slogan, Seward plays Hicks with a tender sincerity although still maintaining his Ivy League rhetoric. Barnes as social-climbing Hicks handles his character with a sophisticated ease. He’s subjected to more than a few verbal punches during the course of events, and a heated exchange with the house painter during a crucial scene over class status is, no doubt, one of the high points of the evening.

Wade and Gainey’s characters (painter Johnson and Ol’ Joe) are familiar Wilson contrarians. Because they are also the comic relief at times, the two actors have the difficult job of making sure their roles don’t drift into caricatures. The seasoned actors both succeed beautifully.

There are more than a few take-away messages in Radio Golf, but most memorable is that August Wilson is a true gem and a master at chronicling American life, and that M Ensemble should stick around for another forty years to continue to produce ― and they do it well ― such meaningful works.