Alliance’s roomies Is A Welcome Entry Of, By And For A New Generation Of Theatergoers 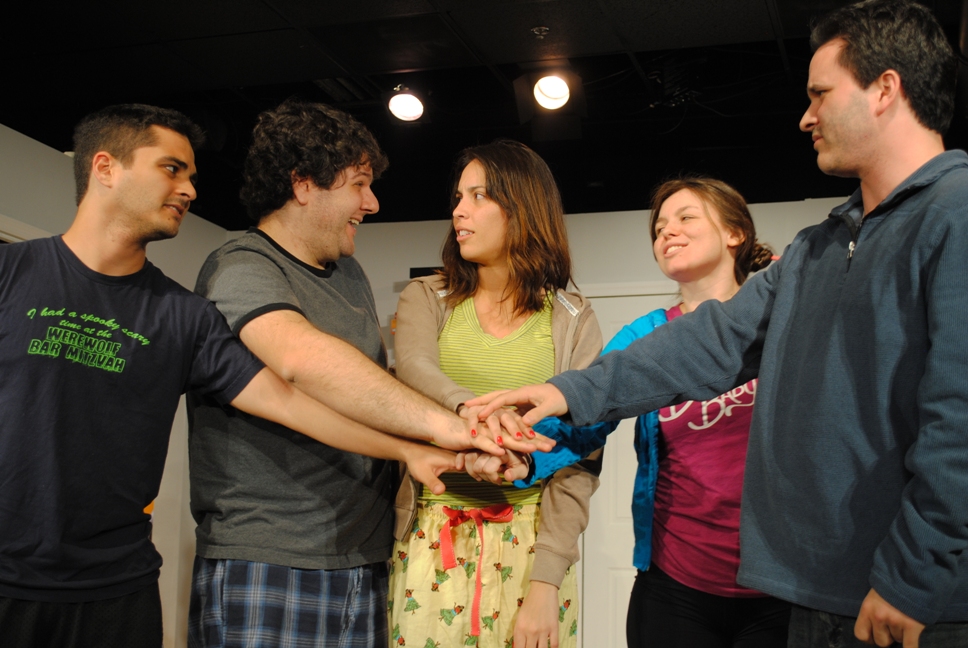 Like Chekov or Ibsen or Louis C.K. said, if you put a loaded gun in the first act, it better go off in the second. So when five bosom buddies put their hands together in a pledge to renew their lease on a communal apartment in the first scene of roomies, you can be pretty sure that it’s not going to end harmoniously.

Indeed, by the finale of Mark Della Ventura’s wry and bittersweet world premiere at Alliance Theatre Lab, it’s not a surprise that this quintet of college graduates is destined to go in separate directions after revelations and betrayals underscore how essential and difficult honesty is in maintaining relationships.

roomies is a welcome entry in the fledgling development of a South Florida theater of, by and for young adults that focuses on their concerns, references their cultural touchstones and reflects their attitudes – not to mention giving them an artistic outlet that they can’t find in mainstream venues. At Alliance, these plays document the anxiety that 20-somethings cope with as they are thrust into a chilly adult world, not always with the eagerness and optimism that their parents had at that age.

The play starts as a slice of life as two women and three men, all actors, gather in their 2-bedroom apartment to exchange the taunts and jibes that have cemented their bonds over the past few years.

Andy (Della Ventura) is an endearingly rumpled teddy bear who is wrestling with a commission to write a play which he announces will be based on his life with the other four. He gets good-natured ribbing and suggestions from his best friend Jake (Della Ventura’s real-life buddy David Sirois) who is quick with a wisecrack, and from the third musketeer, the darkly handsome Robby (Gabe Hammad). Filling out the dance card are Michelle (Ashley Price), classically sexy and energetic, and Liz (Anne Chamberlain), equally lovely in a less showy way and the level-headed organizer of the group.

Some seem more self-assured than others, but all are hiding insecurities. Twice, different characters ask, “Why do you like me?”  It’s a group that prides itself on watching each other’s back, luxuriates in well-practiced punchlines, uses terms like “bitch” as an endearment and knows each other’s foibles such as Liz’s need for sweets as comfort food when she is upset. They tease each other about Andy and Liz’s virginity with the comfortable knowledge that it’s well-meant not malicious. But hidden beneath this veneer of harmony are requited and unrequited feelings. Each also is withholding secrets from the others that will eventually erode at the relationships and drive them apart. roomies charts a quiet tragedy, watching the dissolution of a nurturing cocoon of friendships they thought would never die.

Between Della Ventura’s brilliantly observed dialogue and Adalberto J. Acevedo’s direction, roomies has an eavesdropping feel to its verisimilitude with repartee that only comes from people who have spent so much time together that they know each other’s catchphrases.

Some of this results from Della Ventura writing for and performing with his friends and colleagues. They know each other’s rhythms and tropes, and he can adjust dialogue in rehearsal to fit them. This was evident in Sirois’ script for Brothers Beckett in 2011 at the Alliance and even more evident in roomies. The banter is not just ice-slick smooth, but so interwoven with asides, mutters and shared taglines that you suspect another company could not pull off this specific script as convincingly.

Della Ventura also has a talent for one-liners and smart retorts which he showed off in his one-man play earlier this season, Small Membership. He also delivers illuminating moments that transcend demographics, especially as people reach out gingerly to connect despite a reliance on such blunted tools as everyday language.

One character says with a heart-in-her-mouth tentativeness: “You’re the most amazing man I’ve ever met. Okay? And I know it’s fucking cliché and I know I’m young and I know I haven’t met that many people…but I mean it. You make me feel safe. You have this way about you that makes me feel like everything’ll be alright…. You’re sweet and thoughtful and you listen and you have this incredible peace and goodness about you… I never feel like you have ill intentions… (He starts to interrupt.) I’m not done, yet—almost…. You have this one smile that is just the most…incredible and…beautiful thing I’ve ever seen.  It’s like whenever I see that smile I can’t help but love you.”

roomies may even be more self-referentially meta than The Naked Stage’s A Man Puts On A Play that opened this week since this is a play by a playwright writing a play about a playwright writing a play. All five characters are actors trying to get a foothold in the real world with varying levels of success, just like the actors portraying the actors. Andy, who won a Heideman Award for short plays, mirrors Della Ventura who was a finalist for the same award. Andy has been commissioned to write his first full-length play just as Della Ventura was, and is riffing on the intersecting lives of his friends, just as Della Ventura is doing. It’s like the man looking into a mirror in front of him reflecting the mirror behind him in an endless procession of reflections.

At one point, the touching dialogue that Andy and Jake have invented for a romantic scene in Andy’s play suddenly re-emerges in the “real-life” exchange of two characters during a debate whether to reveal an undisclosed love:
Robby:  Okay, well…nobody likes rejection, right?
Andy:  Yeah, but we’re actors—it’s part of our job.

The acting is something sui generis. It’s almost impossible to describe what they do and how they do it. The roles are so tailored to the actors’ individualized strengths and personalities that the performers slip the characters on like a second skin. It’s not that you forget you’re watching a play, but the cast’s well-oiled by-play, their camaraderie, their connections are depicted with fine-grained, intricate and seamless brushstrokes. They are so convincing that you wonder whether the playwright is reporting rather than creating. Carbonell Awards judges have a persistent problem trying to identify what defines ensemble acting. This is it. So it’s unfair but unavoidable to single out Sirois’ quirky and unique line readings or Chamberlain’s earnest, winning charm.

For all the praise it deserves, roomies still needs some judicious trimming. Even at 90-plus minutes, it seems to run a bit long although Acevedo certainly keeps it moving briskly. The extensive banter used to set up characters and relationships in the lengthy first scene needs a blue pencil. Most scenes meander just a bit in all the verbal jousting and the hard-of-hearing are going to miss some lines that are intentionally muttered or tossed aside. There’s also a whiff of blueprint in the schematic construction of the plot, but this is among the toughest challenges for beginning playwrights.

roomies marks the end of Alliance’s season devoted to original works by company members Della Ventura and Sirois. But perhaps more important, Alliance – along with The Naked Stage, Mad Cat, Thinking Cap Theatre and a few others – has committed themselves to the future of theater in South Florida. roomies proves it deserves encouragement.