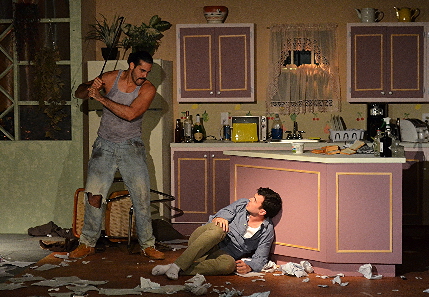 With the fearful ferocity of twin jackhammers running amok, the brothers of Main Street Players’ True West clash and crash, attack and retreat in an anguish-fueled release of pent-up frustration that their chosen lifestyles have not worked out.

Initially, each sibling seems contemptuous of the wildly divergent paths their disparate personalities drove them to. But as their reunion circles down in a spiral of self-destruction, they yearn to emulate the other’s choices – which also have proven fruitless.

Sam Shepard’s most accessible yet still surreal play can be approached a half-dozen ways and is meat for artists to dissect twice that many. In this edition directed by Isaac Polanco, the brothers do not seem to be two warring halves of the duality in every human, and Shepard’s allusions to the myth of the Old West woven throughout are not evident other than the frequent references to the desert and a soundtrack of crickets and coyote yells.

But the late playwright would be well-pleased at what has been wrought by Polanco, Tyler Grimes as conventional educated yuppie writer Austin and Christopher Millan as the animalistic loose cannon Lee. They have portrayed two distinct creatures and then credibly depicted their mutual disintegration as they desperately toy with each other’s approach and, finding no solace there, descend into a circling wasteland.

Yes, it’s ferocious, but it’s also quite funny with copious character-driven gallows humor as the two personas collide and as the men ineptly try to adopt the other’s way of life. The appearance of toasters never fails to elicit laughs in any production.

Something is evidently off-kilter from the moment that we see Austin, a struggling screenwriter whose casual uniform includes a shirt buttoned to the neck. He is pecking at a manual typewriter in hopes of completing a crucial script. He has left his family in Los Angeles to borrow the childhood homestead on the edge of rural California while his mother is on vacation in Alaska.

Lee, a grunting, beer-belching petty thief specializing in home burglaries, reappears after five years to invade the stability that Austin has constructed.
Lee has an idea for a movie and persuades Austin to type out an outline. Austin obviously hopes this will get Lee to return to the desert and stop stealing televisions from the neighbors.

But Austin’s visit from his producer Saul leads to Lee backing Saul into a golf game. A bet during the game ends with Saul dropping Austin’s love story screenplay-in-progress in favor of Lee’s modern western. (Lee cites Lonely Are The Brave, a true masterpiece of the genre that theatergoers should seek out.)

From there, Lee becomes insanely obsessed with writing a screenplay. He desperately needs Austin’s help because Lee can barely type and, as Austin jibes, Lee can’t spell let alone write. The demoralized Austin wants nothing to do with it and gets ragingly operatically drunk, vowing to outdo his brother’s anti-social behavior.

As Lee up-ends Austin’s world and then tries to appropriate it, the “civilized” Austin descends into Lee’s more elemental milieu, both trying to fulfill their yearning for what the other has: freedom or material success. These polar creations begin to change places on the social scale as they head toward a curtain-closing Armageddon.

Polanco’s production drives relentlessly, almost exhaustingly without digging quite as deeply as Shepard’s script makes possible. But after a few more performances, the actors may feel the freedom to explore it even further.

Appropriately, Polanco has staged a very physical production with characters pushing, sliding across the floor, fighting, falling down, sitting on the linoleum in a haze, even Lee pushing Austin up against a wall while his brother cowers.

The sense of danger and evaporating control is palpable as the actors invest themselves with a frightening commitment: Millan actually cut himself twice opening night as he slid across the trash-strewn floor. While smashing a typewriter with a golf club over and over, Millan saw the head fly off – fortunately not into the audience. Someone could get seriously hurt before the show finishes its run.

Millan, who was raised in Miami and done some television work, has the showiest role and embraces it without a shred of self-conscious reserve.  Tall, muscular, with flowing black hair tied behind his head and a scraggly beard, he swaggers and stalks the stage with a deep voice that often descends into a growl. His body language and eyes exude barely-controlled aggression. Credit his ability to indicate Lee’s submerged anxiety, confusion and insecurity without erasing that this elementally threatening animal could come unhinged at any moment. Polanco might rein him in a little bit occasionally, since Millan is barreling way past the speed limit and over the top for almost the entire play which gets a little wearing.

Grimes, an actor-playwright and managing director at the Lovewell Institute, has the less demonstrative role for the first third of the evening. During that portion, he deftly portrays a 1980s middle-class “good citizen” who is quietly being driven by something he cannot even name himself. Grimes is especially good at making it clear that while Lee is disruptive, uncivilized and everything Austin is not, he still loves his brother and is willing to do what he can even though he knows it likely will do no good.

Of course, when Lee torpedoes his brother’s make-or-break assignment, Grimes’ Austin persuasively slides into an alcoholic deluge. Playing drunk credibly is never easy and Shepard is not trying for naturalism at any moment in this play, but Grimes makes us believe it.

Kent Harris plays the shallow film producer who abandons Austin’s evolving script about a romance when he loses a golfing game to Lee and takes up Lee’s proposed scenario for a western. Shepard makes none of the preceding sentence make sense, but it’s at this point, I guess, that you are supposed to stop asking logical questions.

When the two men have turned Amanda Sparhawk’s carefully-ordered suburban kitchen set into a sea of chaos, Shepard takes the play’s finale into complete fantasy as their mom appears (veteran Carol Sussman). While aghast at the destruction (mostly concerned for her dead plants), she seems more or less disconnected from the emotional devastation before her and just walks away as we assume she had during much of their childhood.

With a single set, small cast and known title, True West is a popular revival. Locally, Mosaic Theatre did a solid job with it in 2003 with Richard Jay Simon directing Terry Hardcastle and Michael St. Pierre. New City Players’ edition in 2017 with the real life Davis brothers directed by Mary Elizabeth Gundlach signaled a company to watch in the future.

Main Street Players, which turned from a community theater to professional, uses True West to close its season. Overall, its quality may not be consistent, but when it lands as solidly as it does here and some other productions like Bad Jews and Marjorie Prime, it’s always well worth patrons taking a risk.