Funny & Poignant Grindr Mom Turns A Wife’s Life Inside Out 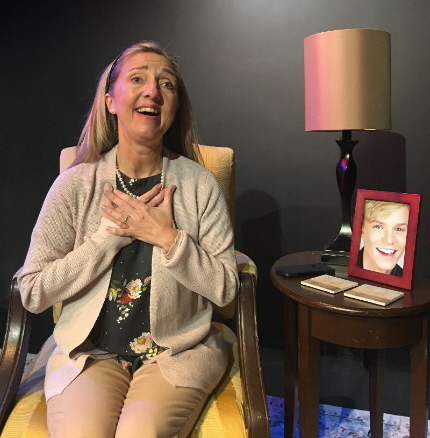 Jeni Hacker as the title heroine in Grindr Mom

Crucial to know about Grindr Mom is that while the heroine is a middle-class pearl-wearing politically conservative Mormon who volunteers once a week at the local school, “The Wife” as she is called in Ronnie Larsen’s script is decidedly engaging, likable and genuinely charming — certainly not a monstrous homophobic bigot.

She exudes a droll self-effacing humor about herself and a non-judgmental attitude about anyone although well aware of their flaws including her work-obsessed ultra-conservative husband with anger management problems.

Which is a useful quality since she has discovered that her blond-haired blue-eyed J.C. Penney model-worthy son has let her know he is “very” gay. They agree not to tell the father (“I’m very good at keeping secrets”) and she quietly maintains her love for the son.

But it does turn her world inside out and forces her to reexamine what she never questioned as gospel. With a warm smile and what she hopes is an attempt to be witty, she tell the audience, “I didn’t want to have a gay son…I prayed every night for God to send me a normal, healthy baby…and I guess I thought God understood what I meant when I said ‘normal and healthy’ but maybe I wasn’t clear enough. I guess I should have been more specific: ‘Dear Heavenly Father, please send me a Republican-leaning heterosexual baby with no birth defects and no lisp.’ And I’m sorry, I know that sounds awful, and yes, I’m strong, I could probably handle a baby with special needs — but please not a Democrat.”

Actress Jeni Hacker greets us with cookies and hospitality into her living room in the Wilton Theater Factory’s small Foundry space and begins a 90-minute monologue describing with copious humor and trenchant poignancy her journeying  as she  explores her son’s lifestyle, step by step, deeper and deeper.

As she does, she tries to find her way through an ever-more complicated world with a moral compass she fears might prove useless.

Her key mechanism is downloading the app for Grindr, thinking it’s a dating service, and giddily asks the son if it’s like Candy Crush.  As happens with each revelation, her slightly amazed and embarrassed reaction is always funny to watch. A favorite is when downloading someone’s photo, she realizes she needs to turn the phone sideways and then realizes what it’s a photo of.

But she becomes driven to understand how the society she has inhabited her entire adult life is only a slice of what exists and how that changes her perception of the world. She signs up on Grindr under a fake handle and is stunned at the number of people within 1,200 feet of her seeking a sexual hookup, even at her school. Numerous serious and dramatic revelations ensue.

Larsen, a producer and playwright best known here for sex-drenched gay comedies often with male nudity, has produced a surprisingly funny, subtle and tender story with more depth than you might expect given his other works.

He is unusually well-served by A-list talent Hacker and director Stuart Meltzer, both multi-award nominees and winners who strike precisely the right tone.

Physically, Hacker is diminutive with long brown hair, sparkling eyes and a kind of elfin visage. Although she inhabited the murderous pragmatic Mrs. Lovett in Zoetic Stage’s Sweeney Todd, here she exudes a neighbor-next-door vibe. But what these two also create is a sense that “The Wife” is a bit lost in her “normal” life and is not even aware that she is searching for something.

She would never bemoan anything in her “perfect” world. She sheepishly acknowledges her sinfulness is once a week sneaking caffeine in a Diet Pepsi against the church’s orders when her husband isn’t looking and then tossing the can in a neighbor’s trash.

Her faith is a crucial support: “I believe, no, I know, my two babies are waiting for me in Heaven and will greet me when my earthly body dies and my soul ascends to Heaven.”

And as The Wife is drawn deeper, she discovers with compassion that Grindr’s laser-focus on sexual hookups with little or no emotional interest has a sad component. “Grindr made me feel lonely,” she says.

All this is masterfully if invisibly navigated by the superb Hacker and Meltzer.

You may see the final reveal coming about a half-hour out, but Larsen provides a lingering tableau of someone who thought she knew the good and bad, yin and yang of life, only to discover cause to question it all.