Butterflies Are Free Once Again at Riverside In Vero Beach 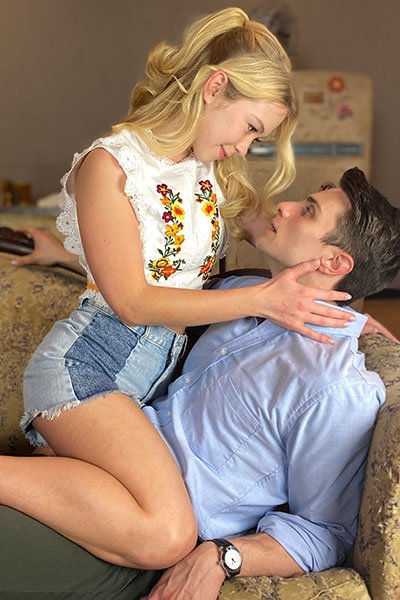 Riverside Theatre in Vero Beach opened its 50th season on October 15 with Butterflies Are Free, a charming romantic comedy harkening back to the years of the theatre’s beginning.

While it may not be the big-name musical with which Riverside usually launches a season, it’s a frothy of-its-time favorite with appealing characters and plenty of laughs. Written by Leonard Gershe, it’s the kind of play that was a staple on Broadway in the 60s and 70s: a small cast, one set comedy (think Neil Simon) which in this case ran for three seasons from 1969 – 1972. As such, it’s a smart choice with which to begin the ramp up to splashier productions later in the season.

The story centers on Don Baker, a young aspiring songwriter who happens to be blind, and has moved into a New York City apartment to break away from his sheltered Scarsdale upbringing and assert his independence. His protective, worried mother has reluctantly agreed to a two-month trial period during which she’s not allowed to intrude on his autonomy – and staying away is driving her crazy.

Don’s next-door neighbor, Jill Tanner, recently divorced after a six-day marriage, quickly insinuates herself into his apartment and his life. She’s as effervescent and talkative as he is introspective and reserved, so it’s pretty clear from the outset that romance is in the stars. Jill is so self-absorbed and chatty that it takes her quite a while to notice Don’s blindness, during which he enjoys the absence of the awkwardness that results after she does so. As Jill, Allison Elaine is a delightful dervish, nosing about Don’s apartment, unselfconsciously twirling and striking dramatic poses as she chatters about her aspirations to become an actress. She’s the definitive child of the sexually liberated 60s, and it doesn’t take long before sparks fly between the two.

He is smitten before nightfall, and when his mother arrives unexpectedly and finds the two picnicking in their underwear, well …

If the story is unsurprising, its unfolding is a lot of fun. There are laugh-out-loud moments throughout. Laurie Carter Rose as Don’s mother, Mrs. Baker, accomplishes the remarkable task of playing a seriously unfunny woman who nevertheless says many comical things. Her rigidly perfect posture, the way she pulls down the hem of her suit jacket (the period costumes by Anna Hillbery are spot on) scream “uptight.” Yet she elicits our sympathy as her fear for her fledgling child leaving the nest butts against the desire to see him self-sufficient and happy.

As Don, Alec Nevin rises admirably to the challenge of playing a sightless character, doing so with subtlety and a straightforwardness that doesn’t call undue attention to itself. He also rides the emotional rollercoaster of falling for Jill, whose flakiness may undermine their relationship before it can take hold, while deflecting the overbearing attention of his mother and the chinks it makes in his self-confidence.

Alec Ricardo Ruiz completes the cast with a juicy scene in the second act as Ralph, the director of the outlandish avant-garde play for which Jill auditions. He’s decked out in full hippie-dippy regalia from headband to bellbottoms, for a look as overblown as his ego.

Director Allen Cornell keeps the pace vibrant and the movement fluid, guiding his cast to moments of heightened emotion that are almost always leavened with humor. His scenic design nicely evokes the downscale New York of the era, with industrial light fixtures and exposed pipes, plaster chipped away to reveal patches of brick, and a dingy skylight. A loft bed, director’s chair, clawfoot bathtub and beaded curtain further plant us in those groovy days, while amplifying Mrs. Baker’s mortification at her son’s living conditions. Ryan Gravett’s sound design effectively deploys radio hits of the day to transition between scenes.

Playwright Gershe based his work loosely on the life of attorney and activist Harold Krents, an early advocate for disability rights. The original production starred Keir Dullea and Blythe Danner, who won a Tony Award for Best Leading Actress in a Play. Eileen Heckert repeated her stage performance as Mrs. Baker in the 1972 movie adaptation and won an Academy Award for Best Supporting Actress.

That the action all takes place over the course of one day gives it a fairytale quality common to the romcom genre. Don and Jill, and the actors playing them, are so innately engaging that we root for them to find happiness, whether together or apart. That both are strikingly good-looking doesn’t hurt in the least, either.

In welcoming the audience to opening night of Riverside’s season, artistic director Cornell noted that it’s been three years since he had marked that October occasion in person, given the challenges of the pandemic. He deliberately chose a play from the era of Riverside’s opening to celebrate the theatre’s half-century milestone. The program notes the time of the play as “the Age of Aquarius,” and as Cornell pointed out, it’s the time when he himself and perhaps most of Riverside’s audience were the age of the protagonists. Indeed, many of us remember that period warmly—even if through rose-colored glasses.

Butterflies Are Free performs through November 13 on the main stage at Riverside Theatre, 3250 Riverside Park Dr., Vero Beach. 7:30 p.m. Tuesday-Thursday, 2 p.m. Wednesday, Thursday, Saturday and Sunday; 8 p.m., Friday-Saturday. Tickets start at $45 and can be purchased by calling the Box Office at 772-231-6990, or online at www.riversidetheatre.com.