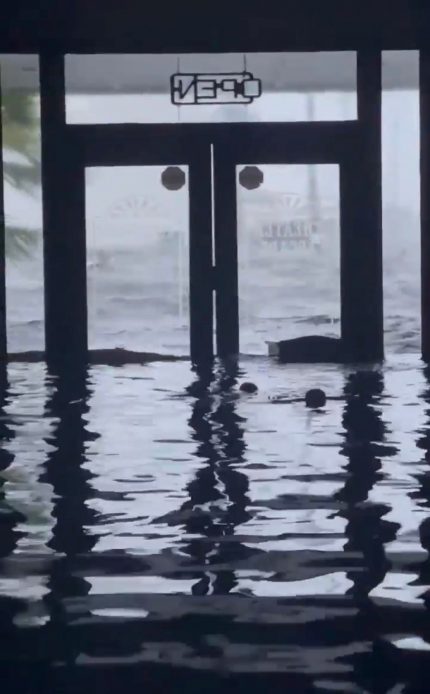 Hurricane Ian’s aftermath at the Bay Street door to the 100-year-old Arcade Theatre building, the home to Florida Repertory Theatre.

The last weekend in September, Lady Day at Emerson’s Bar & Grill opened in the black box space inside Florida Repertory Theatre’s 100-year-old home in Fort Myers despite warnings of a hurricane headed further up the west coast toward Tampa.

Ninety-six hours, a sudden right turn in Ian’s path, 115 mph winds and 6 to 28 feet of storm surge later, the show did not go on.

Part of the roof caved in on the 393-seat main auditorium of the historic Arcade Theatre. The orchestra pit was under six feet of water nearly reaching the edge of the seats. Three inches of thick black sludge covered the administrative offices, rehearsal halls and storage areas.

Water rushing in from the adjacent Caloosahatchee River destroyed uncalculated amounts of lighting elements, costumes, props and documents, even a private library of play scripts. Brownish four-foot-high water stains were found days later on the walls.  Though performances at the theatre resumed this past week, the damage from Ian’s onslaught is still being accounted for.

“I joke with people as I give the curtain speeches before our performances,” said Producing Artistic Director Greg Longenhagen, citing the pandemic. “I say, it’s almost biblical. First, we had plague, now we have flood. If the locusts show up, I’m leaving town.”

The venerable theater wasn’t the only one to feel the wrath of Ian, one of the moist devastating storms to smash Florida : Sixty miles to the north, the walls surrounding the stage of the Venice Theatre collapsed and the fly loft was ripped open on the 72-year-old community theater’s home. Thirty-five miles to the south in Naples, the Gulfshore Playhouse’s $40 million opulent new home under construction lost one weakened concrete wall and may lose another.

“It comes in, it hits hard and fast. It leaves everyone with their mouth agape,” Longenhagen said this week during a break from applying for FEMA loans and other emergency grants.

But on the other side of the balance sheet was a resilient staff and committed performers who refused to wait longer than to catch their artistic breath after checking their own homes for damage. They cut out yards and yards of ruined drywall and baseboards throughout the building. They flushed out floors. They piled ruined furniture, sewing machines and debris on the sidewalk.

After 16 lost performances, representing about $60,000-$80,000 in income, what was salvageable of Lady Day was moved to the nearby Alliance for the Arts’ Foulds Theater, and the show went on there, even as the Rep staff was in the midst of a massive cleanup of a scope that none had seen before.

This past week, after the company had made the main auditorium livable enough for audiences, the company opened – on time – the ironically titled Incident at Our Lady of Perpetual Help. Rehearsals are underway for the upcoming And Then There Were None and Freud’s Last Session.

“They have let no dust grow under their feet,” dryly quipped Michele Hylton-Terry, executive director of the Fort Myers City Community Redevelopment Agency, a major champion of the venue. 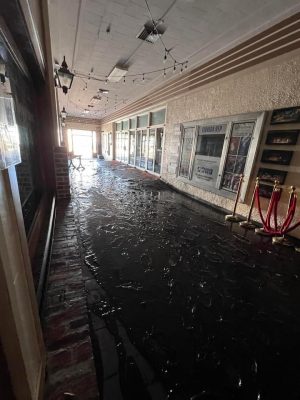 Clean-up will last for months. Insurance will not begin to cover a loss penciled in between $1 million to $1.7 million, Longenhagen said.

When audiences return to main auditorium, they will notice all the wood cut out under the apron. A portion of the ceiling has been patched and tarped. Rugs have been freshly drained and shampooed. A remediation company dehumidified the area, and refreshed it with a disinfectant to stop mold and curb the odor.

The damage is a profound blow for a professional company celebrating its 25th anniversary with two active performance spaces as well as a lengthy list of education programs serving about 45,000 youths ranging from Shakespeare in the schools to summer camps. Its reputation for quality is solid, and not just in the community. The late Wall Street Journal critic Terry Teachout bestowed sterling reviews on annual visits year after year, contending that its production of The House of Blue Leaves was “as good as it gets.”

But aside from the fiscal loss, the overwhelming worry is trying to attract people back into the theater, Longenhagen said. “We haven’t sold many tickets since the storm hit, which is understandable. A lot of people here are homeless. People are still living in shelters. We lost lives. We lost, sadly one of our volunteers” Marti Campbell, an usher there for 16 years.

The potential effect on a demoralized, otherwise occupied audience’s return was why the Barbara B. Mann Performing Arts Hall venue eight miles away area postponed the scheduled December visit of the national Hamilton tour. The building sustained some roof damage, but it is already resuming one-night events. But attracting 1,500 patrons to a one-night stand seemed far more likely than trying to attract 30,000 people over 16-peformance date.

The tragedy was just one more for a regional theater, which, like hundreds of others across the country, already was dealing with the fallout from the pandemic with dark houses and staff cutbacks.

Like so many medium-sized regional theaters, “the Rep” operates fiscally on a very small margin, with little or no reserves past capital projects. Given a $4.3 million annual operating budget pre-pandemic, “we feel if we can be in the black just by a little tiny bit, then we’re jumping for joy. But arts organization, these are very delicate institutions,” Longenhagen said.

The stumble for the theater also affects the community that had focused on the company as part of a major downtown redevelopment in the city. “It has been a vital part of the fabric of our downtown, bringing many visitors to go to the theater, have dinner, shop” said Hylton-Terry. During the height of tourist season, its shows bring 500 patrons for each of eight shows.

The public agency, which paid the theater’s rent until the company bought the building, sees the venue as “integral to our downtown’s success,” she said.

Still, the Rep’s home fared far better than the 1926 home to the Venice Theatre located 60 miles to the north. Rehearsals had begun for Kinky Boots slated for November. The north wall buckled open under 115 mph gusts winds, allowing water to rush in to cover the stage, backstage, fly loft and front of house. The walls surrounding the stage were ripped way leaving only the skeleton of the steel structures. 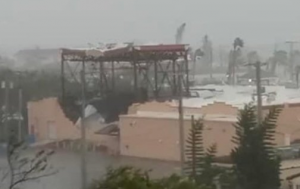 Early estimates place the damage at $4 million to $5 million. While Kinky Boots has been officially postponed a year, the Venice company is finding other venues to put on A Christmas Carol the first week of December.

Gulfshore Playhouse, housed in a civic building in Naples for many years, cancelled its first production of the season, 26 Miles, in part due to infrastructure challenges and city-wide damage.  The apartment complex housing most of the actors was inundated with sea water.

Hurricanes are a fact of life in Florida for theaters to the extent that the storms and the accompanying human metaphors are worked into the narratives of locally-written works such as Nilo Cruz’s Hurricane and Christopher Demos-Brown’s Captiva.

The Rep had little trouble when Hurricane Charley swept nearby in 2004. When Hurricane Irma threatened in 2017, rehearsals and previews were postponed.

Among the worst damage recorded for a Florida theater occurred in 1992 when Hurricane Andrew struck Dade County. At the 300-seat Actors’ Playhouse in Kendall, the roof of the former movie house caved in, the box office was destroyed and the lobby damaged. But two years later, it bought into another former movie house in downtown Coral Gables’ ritzy Miracle Mile.

The lasting lessons are reminiscent of man against storms in The Tempest and King Lear.

“It really does lend itself to how small we are in the world, to how tiny we really are when we come up against Mother Nature,” Longenhagen said. “I don’t care what you put up, I don’t care what kind of steel doors or whatever kind of hurricane shutters you may have, whatever that is, at the end of the day, we’re all vulnerable.”

Some second guessing has occurred although the staff did lay down sandbags ahead of the storm. “Some people can point the finger and say, well, you didn’t do this or you didn’t do that. But it really wouldn’t have mattered because when Mother Nature comes roaring at your doorstep with a four-foot storm surge, she’s going to have her way.”