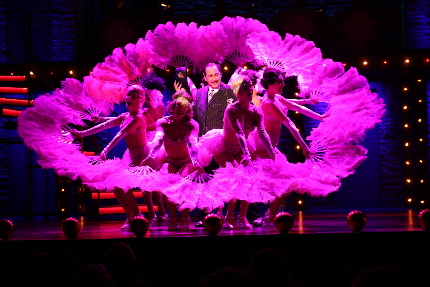 Riverside Theatre dishes it all out, from explosive talent to dazzling visuals in an immensely satisfying, professional production of Chicago.

Directed and choreographed by Richard Stafford, the show also delivers on the theme of lies as truth and how easy it is to use mass media to manipulate popular opinion. Who knew a 1975 musical about a couple of murderous 1920s flappers could resonate so with 2017 audiences.

The musical Chicago was created by composer John Kander, lyricist Fred Ebb and choreographer Bob Fosse, who joined Ebb to create the book. Set in Chicago during Prohibition, the story follows chorus girl Roxie Hart who shoots her lover and, after being betrayed by her witless husband, goes to jail where she revels in the notoriety designed by the scheming lawyer, Billy Flynn. While in jail, Roxie meets up with another infamous chorine, Velma Kelly.

And this is one sexy show. Stafford vamps his talented chorus into lurid, twisting, bumping and grinding Fosse-esque complex dance; it begins with that iconic number, “All That Jazz,” led by Velma, who sings “Come on, babe why don’t we paint the town? And all that jazz.”

As Velma, Heather Parcells is a wonderful, accomplished dancer who eats up the stage with Stafford’s exciting choreography. She gives so much that she has to fight for air to sing, but when she finds it, she delivers on that score as well. She’s got such strong stage presence that she turned a mishap on opening night into a joke (she slipped, fell down, pounded the stage in character and, when her next line came, she stated she could do it again, but without falling). These things happen in live theater. What’s exciting is how a great performer can squeeze juice from them. And Parcells did just that.

Kaitlyn Davidson is a dream as Roxie Hart. Pert and cute, she lets Roxie use her sexiness to work the room in “Roxie,” a sassy musical number where she sings “They’re gonna recognize my eyes, my hair, my teeth, my boobs, my nose.”. Davidson is especially funny as the dummy in “We Both Reached for the Gun” with lawyer Billy Flynn as ventriloquist.

Matching both these talents step for step is Kevin Pariseau as Billy. While the dancing dazzles, Pariseau brings a larger than life humor in his portrayal of the media-manipulating lawyer who brags about it all in “Razzle Dazzle” singing “Give ’em the old three ring circus, stun and stagger ’em. When you’re in trouble, go into your dance.” And what a pleasure it is to enjoy a performance by an actor who knows how to enunciate every syllable, making every line clear. Yes, that’s acting 101, but too many skip that lesson. (No wonder he has worked on more than 120 audiobook recordings.)

Meghan Colleen Moroney is Matron Mama Morton. She’s a pro through and through and fills the theater with her big, brash performance, especially in her number, “When You’re Good to Mama.” Dane Agostinis makes a most sympathetic Amos Hart, Roxie’s hapless and witless husband, And Geoffrey Kidwell is a funny and appropriately histrionic Mary Sunshine, a newspaper columnist who Billy Flynn easily manipulates.

The nine-piece orchestra, conducted by music director Anne Shuttlesworth, is a thrill on its own. Adam Bookspan (trumpet) and Dana Teboe (trombone) bring out a perfect brassy touch to the big numbers.

A little sidebar: The musical Chicago was based on Maurine Dallas Watkins’ 1926 play, which had been directed on Broadway by the legendary George Abbott in his solo directorial debut.. Watkins was the Chicago Tribune reporter whose popular columns about a couple of women who murdered their men inspired her play.. Fosse approached. Watkins numerous times to let him turn her play into a musical, but by then. Watkins had become very religious and said “no.” After she died, her estate said “yes.” It’s not a far stretch to imagine Fosse, known for his rather dark and cynical nature, to include the Mary Sunshine character as Watkins’ alter ego — a sensationalizing columnist who has that big reveal at the end showing her real self.

Riverside Theatre’s Chicago is pure delicious entertainment and very much worth a trip to see this. The cast is loaded with Broadway, off-Broadway and Broadway tour credits and it shows. But throughout the razzle and dazzle, you’re going to also enjoy the irony when you hear the lyrics “Back since the days of old Methuselah, everyone loves the big bamboozler.” Plus ça change, plus c’est la même chose (the more things change, the more they stay the same).