Maltz Theater Aims To Produce ‘The Producers’ As Its Own 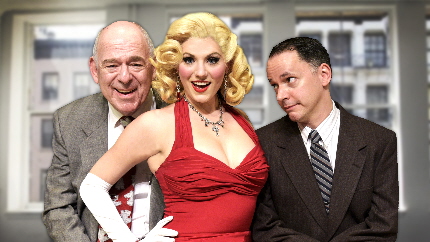 The challenge of mounting such an iconic musical as The Producers with its legendary Broadway production haunting any subsequent edition oddly isn’t chilling the principal talents at the Maltz Jupiter Theatre’s production opening Jan. 10.

For veteran character actor Lenny Wolpe, it’s easy because he never saw Nathan Lane’s inimitable creation of Max Bialystock in 2001 nor even Zero Mostel’s unforgettable performance in the 1968 film. He was working in another show through much of the original cast’s run and only caught it later starring Fred Applegate and Don Stephenson.

Wolpe, said as rehearsals began last month, “I’m in awe of Zero Mostel and Nathan Lane, but it won’t inform me at all. I never saw (them), so for me it’s not a big problem. And I’m so not like any of them, whatever I’m going to bring to the role will be my unique contribution.”

He has played a producer, at least, the comic Feldzieg in the original Broadway production of The Drowsy Chaperone in 2006.

Director Mark Martino, whose production of Les Miserables won it and him Carbonell Awards last season, has frequently dealt with bringing freshness to an theatrical work which audience members vividly recall from their past.

“We will not reinvent the wheel, but we are coming in with no particular preconceptions. I don’t think it’s incumbent to put on the same show they’ve seen. We have a fresh set of eyes. Certainly the audience will come with expectations because the script and the score and the music are there. But we don’t need the original choreography and original direction to accomplish what they have come to see, a fantastic show with razzamatazz.”

He, oft-paired choreographer Shea Sullivan and the cast will be calling on their decades of experience to “pull out every gag in the book” to augment Mel  Brooks’ creation, he said.

Mark Price, playing the nebbish accountant Leo, closed a production at the esteemed Papermill Playhouse barely two months ago. But in that production he played the director’s high camp assistant Carmen Ghia, about as far a stretch from Leo as possible.

“It’s relatively easy” not to be influenced in creating his own Leo, he said, “because I’m not doing the same role. It’s really like starting from scratch.”

The secret is to play the “truth” of the situation, to take seriously that the characters believe they are playing for high stakes, Price said.

His director added, “The characters can’t be stereotypes; they can’t be one-dimensional. They have to be archetypes.”

For the six people living in the Brazilian rainforest, The Producers was originally created by then veteran-television writer Mel Brooks as an irreverent black comedy about a ne’er-do-well Broadway producer Max Bialystock whose rotten track record has reduced him to raising money by romancing rich little old ladies. A shy accountant Leo Bloom notes that buy promising each investor large percentages of the profit – perhaps totaling 1000 percent – they can make a mint if the show tanks. So they set off to find the worst possible property ever, and do so, in Springtime For Hitler.

As the Maltz team sees it, The Producers is not about a crooked plot to bilk little old ladies of their nest eggs. The show is really a love letter to the gloriously off-beat world of theater and its quirky denizens.

Martino said, “I love the affection and energy that all these characters have because we are them. We do this. We did decide to pin our lives to this ridiculous crazy endeavor.”

For instance, Wolpe sees the dominant facet of Max’s character not as his duplicitousness but his indomitability.

Max’s key “happens right at the beginning when he is so defeated with his latest flop,” Wolpe said. “You see the strength. ‘How dare (critics and the public) insult me like this?’ This man gets back on the horse. He’s such a survivor.”

That outlook is indicative of the entire show. He said, “It‘s a valentine to every show that ever went on and these are the people who do it,”