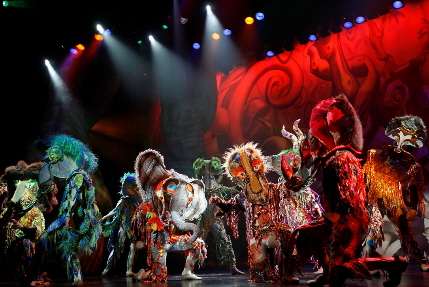 Excuse me a moment; I have to call my chiropractor.

Okay, thank you. It’s just every joint in my body is aching watching Cirque Dreams Jungle Fantasy at the Broward Center. I didn’t know human muscles could do some of the things on display.

Contortionist twins turn themselves into configurations that pretzel makers wouldn’t attempt. A roller skating couple spin on a tiny platform, the woman flying out horizontally from her partner connected only by neck straps. Folks juggle objects that make professional baton twirlers look clumsy. Aerialists soar around the stage on cables concealed by filmy butterfly wings.

Jungle Fantasy is one of a dozen Cirque Dreams’ productions that surround circus acts in otherworldly music, fluid lighting and spectacular costumes filled out by ultra-buff bodies. This edition has played all over the world since 2008 including Broadway, Vegas, cruise ships and several Florida venues, but it’s the first time that Neil Goldberg’s Pompano Beach-based company has brought it home to Broward.

Having seen two other Cirque Dreams shows, they seem to have a pretty standard template from production to production, essentially the same acts dressed up in Christmas holiday garb or accompanied by Broadway singers, perhaps tweaked a bit. Each is clothed in a different theme, but it’s the same show – this time a bunch of animals cavorting in a verdant jungle that is part Never Neverland, part My Little Pony, part Lion King, part Barnum & Bailey.

That said, the skill sets on display are pretty darn breathtaking and are in no danger of getting stale, even if you’ve caught a Cirque Dreams show previously. Some acts may seem a bit tame at first, such as the guy juggling sticks painted with Day-Glo. You may be stupid enough to think, “Oh, I could do that with a bit of practice.” Nonsense. Each of the 20 numbers grows in complexity until you’re in awe of something as simple sounding as woman juggling a table with her feet.

A person sitting nearby quipped that it looked like an episode of America’s Got Talent (actually the contortionists Buyankhishig and Erdenesuvd Ganbaatar have appeared on that show), but the production values are pretty lush given that it has a tenth of the budget of that other Cirque company.

This is particularly evident in the costumes by Lenora Taylor, Santiago Rojo and the Cirque Dreams’ team. The performers are garbed in wildly inventive anthropomorphic wardrobes that turn them into lizards, a wildcat, birds, giraffes, emus, a unicorn and several creatures not found in a zoology textbook. There are likely a couple of hundred costumes hiding the fact that there are only 26 performers democratically appearing over and over, playing in spotlight one number, serving as anonymous back up dancers in the next, costumed stagehands in the next.

The music and lyrics are mostly by Jill Diane Winters, who played the singing emcee Mother Nature in the Broadway run. The music is your usual exotic new age stuff; the lyrics, who knows. You can pick out a few phrases about personality and self-empowerment, but most were so unintelligible Wednesday in the fifth row that they could have been in that pseudo-language that the other Cirque company uses. The music is all canned except for the violin played live onstage by the sinewy satyr Jared Burnett.

The cast reflects an admirable United Nations of ethnicities (or a hot Saturday night in South Beach) from the American Julia Langley as Mother Nature to Oleg Bocharov from Belarus who does handstands on a series of chairs stacked up to the top of the proscenium. The audience seem to take to the “small grasshopper” played by Kellie Kessling who was found in the company’s young campers program.

With all the flipping and flying, you’ll wish you had the contract supplying the company with masseuses and icepacks.