Colored Museum’s Incisive Satire Could Not Be Better Timed 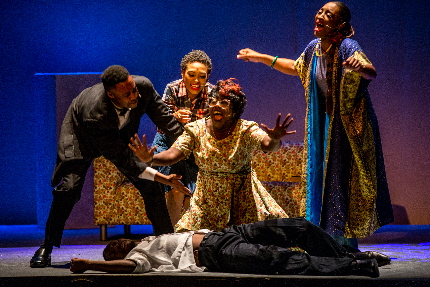 One of the joys of this job, as we’ve said before, is when writing a review is the closest thing we can do on the Internet to stopping people on the street and physically dragging them to see a terrific piece of theater.

Consider yourselves accosted and being hauled off to the African Heritage Cultural Arts Center’s production of George C. Wolfe’s hilarious and trenchant The Colored Museum – sadly still as relevant as when it premiered in 1986.

A thrilling cast and an impossibly talented young director mine all the raucous mirth and underlying blues in Wolfe’s stinging social satire with music that uses 11 standalone vignettes to depict the complex African-American experience and contemporary efforts to deal with its legacy.

Separate pieces – many of them monologues delivered to the audience – are exhibits in the titular museum, which in this production include physical items atop pedestals such as a noose on one side of the stage and a hoodie on the other.

Wolfe and director Jamel Booth’s tone is joyfully irreverent, absurdist even surreal like a predecessor of In Living Color but with pointed commentary peeking out at all times. Indeed, underlying virtually every piece is a sense of long-festering corrosive pain. Just as prominently, it depicts the struggle in the post-Civil Rights Era how to define one’s identity when you finally have the admittedly limited freedom to do so.

For instance, in “Symbiosis” a clean-cut handsome man in a business suit who could be on his lunch hour from a Wall Street firm is happily dumping into a trash bin all the reminders of his ethnically-celebratory youth that don’t fit into a mainstream white society: his first dashiki, a “Free Huey” button, an Afro comb, a Sly and the Family Stone record album, a copy of “Soul on Ice.” But his younger grungier self comically fights him, begging him to hang onto these reminders of who he was and a legacy that needs to be preserved.

Or in “The Photo Session,” a pair of glamorous male and female models from Ebony magazine strike stylish poses and issue trendy bon mots, but they note in asides that the “eternally smiling” vision the magazine offers is an impossibly unrealistic and unattainable lifestyle that is at heart narcissistic and shallow.

Or the first sketch which opens with a projections of slaves being stacked like cordwood aboard ships in the triangle trade. But then we meet a cheery chirpy airline attendant who welcomes us on Celebrity Slaveship where she advises us to keep our shackles on at all times and not to rebel. Like most of the show, this isn’t especially subtle as humor or commentary, but it is delivered with such infectious enthusiasm that it lands solidly.

At the considerable risk of sounding condescending and paternalistic, this production deserves a larger, wider, more ethnically diverse audience than the one most likely to attend the beautiful Joseph Caleb Auditorium facility in the heart of Liberty City.

Because at this tumultuous time in American race relations, AHCAC’s Museum is far more than an affirmation of what minorities already know and appreciate seeing depicted on stage. For everyone else, it serves as a thoroughly entertaining, but illuminating report from deep inside about what it feels like to be a black American. The fact that this play was written 30-plus years ago hasn’t erased a whit of its currency.

One of the best episodes is “The Last Mama-on-the-Couch Play.” This delightfully wacky cross between Masterpiece Theatre and Raisin in the Sun is being played as if a troupe of unrestrained ham actors are trying out do each other’s over the top performances. But by lampooning the stereotypes (the angry young black man, the earth mother, the back-to Africa sister) it chides us for not asking theater-television-film to present more complex realistic characters.

Ten talented actors inhabit multiple parts encompassing a spectrum of black lives ranging from the ghost of a soldier to a raging queen dominating a nightclub. It’s a true ensemble, although most members have at least one tour de force turn, often starting off quite comical and ending in a near emotional breakdown. 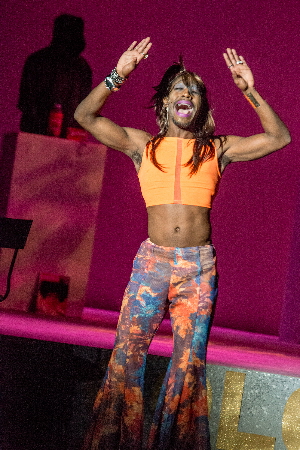 But there are standouts. Jeffery “J. Case” Cason Jr., who electrified audiences as the choreographer and lead dancer in M Ensemble’s God’s Trombones last season, is simply amazing in his ability to slip seamlessly and convincingly into the skin of three distinctly different powerhouse characters. There’s Miss Roj, the transgendered nightclub queen whose silliness is interspersed with incisive observations about the destructive danger of hedonism. There’s Walter Lee-Beau-Willie Jones, the manic mashup of Raisin’s Sidney Poitier role and a half-dozen others. And finally he’s the street kid trying to keep that businessman from tossing away his past. All that they share is a loose-limbed lithe Ray Bolger physicality, an uninhibitedly daffy sensibility and a FPL power plant glowing like Three Mile Island.

Yesenia Ozuna is just as stunning as Lala Lamazing Grace, a talentless lounge singer with a fake French accent acquired overseas and an inability to stay on key. She is having her first audition in America, but as the act continues, her childhood and original accent keep popping up to puncture the artificial veneer she has created to escape her past. Ozuna shows elsewhere that she has a powerful voice, so it’s an accomplishment for her to sound this bad.

Jean Hyppolite, the lead in Seven Guitars, shows a range that makes you check the program to make sure it’s the same actor: that assimilating businessman who probably graduated from an Ivy League college and the haunted deranged soldier in the jungle who murders his friends in an all-black unit to save them from the tragic future he sees as their inevitable fate back home.

It would take twice this space to give credit due castmates Stephon Duncan, Brianna Hart-Cox, Trittney Nicole Huzzie, Zaylin Yates, young Zaharia Monet Merritt, and Toddra Brunson and Chastity Hart who burn down the house with their singing. Isis Roberts was the musical director.

The entire show clearly reflects the unifying vision, polish and inventive staging of director-choreographer Booth, a recent grad of Florida A&M University in his professional directing debut. While his cast is obviously talented in their own right, it’s easy to see how he has infused all of them and the production with same unabashedly high-energy, deep-diving verve.

The evening is not perfect: Wolfe, better known for his subsequent career as a director including Angels In America, lets some vignettes go on a bit too long. And while the show intentionally goes over the top many times for artistic reasons, sometimes the unreined results can go too far and become sloppy.

But if this show had a longer run and thus Carbonell Award eligible, a half dozen nominations would be inevitable.

There’s an entire blog to write about what this production says about black theater in South Florida and the growing talent pool. Suffice it to say for the time being that along with M Ensemble’s recent Kings of Harlem, Seven Guitars and God’s Trombones, this edition of The Colored Museum is a nagging reminder that black theater in South Florida – which has not always been consistent — has quietly catapulted several levels in quality in recent years. And it is a rebuke to other theaters serving a more diverse audience that there is a growing pool of talented African-American artists who should be getting far more work throughout this region. 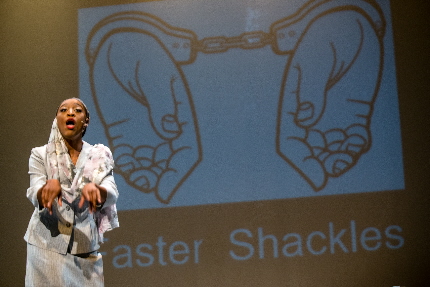