Friendship, Revelation, Determination Are Hallmarks of The Ladies Foursome 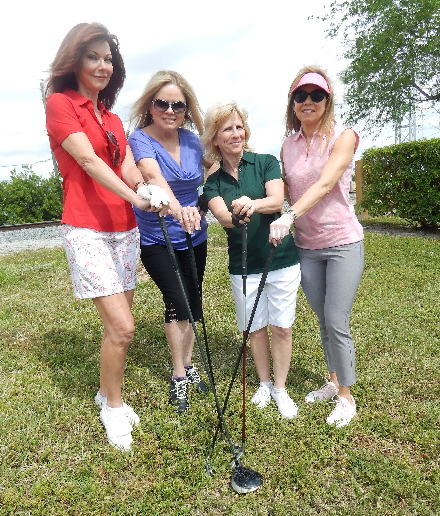 Pigs Do Fly Productions executive producer Ellen Wacher recently had one of those moments when she had to pull the plug on the play she had planned for her spring production.  The plug-pull was, as Wacher confided, for an original, full-length musical play that she had her hopes pinned on, signed off on it being done, then watched as months went by with, as she says, “not much happening” – requested rewrites not done, actors not cast. To paraphrase the disastrous situation, Wacher says “things just weren’t working out.” She had already booked theater space at Empire Stage, and was determined to keep Pigs’ spring production aloft.

Canadian playwright Norm Foster’s The Ladies Foursome was one of the comedies Wacher’s play reading group had already been mulling over for a possible future production. Director Genie Croft suggested that Pigs punt with that, and on Feb. 26, Wacher said yes to The Ladies Foursome. Croft found actors. No auditions. No time for that. Instead, the director pulled together local actresses that, according to Wacher, she could visualize for the ensemble: Janice Hamilton, Deborah Kondelik, Jacqueline Laggy, and Elissa D. Solomon. After a few weeks of rehearsal, the show opened with a preview on March 21, then started the run March 22.

Foster’s play is a bookend to his The Foursome, about four guys who reconnect at their 20-year college reunion on the golf course. His female version debuted at the Upper Canada Playhouse in Morrisburg, Ontario, in 2014. It goes 18 holes with three lady golf buddies who get together for a round to tribute their friend, Catherine, who has died after being struck by lightning atop a Ferris wheel.

A woman they meet at her funeral joins them the next day for a round of golf to fill out the foursome. She knew Catherine, who vacationed at a lodge in the mountains two weeks every year. The fourth player becomes the necessary addition that makes them take a closer look at themselves, and each other.

Pun intended, the four actresses play well together, and Foster’s script is successful at creating distinctive characters for each. Hamilton commands the stage. She makes the most of Connie, a local television news anchor whose promiscuity is no secret. Foster gives Connie the best lines for choice, comic moments. Hamilton mines them for gold, amping up Connie as sexy, spicy, and cynical.  Too bad that Foster had to rely on a cliché for the character’s big reveal (a similar story that she tells about how the love of her life was killed by a suicide bomber was close to the tearjerking plot of the 1996 movie Up Close and Personal).

Laggy’s Tate is an uptight, stay-at-home mother of three, married to a surgeon named Bobby. While satisfied with once a week sex with her husband, the day on the links makes her realize the sacrifices she’s made in her life. She has dreams of her own; perhaps with the help of her friends she can open that little café.

Margot, played with an easy comfortability by Kondelik, isn’t much of a golfer, but “where else can you drink this early in the morning and people think it’s normal?” She has a drinking problem, but, hey, she admits to it. The owner of a construction company, her business is successful, but her personal life not so much: she’s estranged from her daughter, and divorced from her husband.

The outsider is Solomon’s Dory, who gave up her dreams of being a singer in Las Vegas to move to the wilds of Canada to run the Lake Arrowhead Inn, and whose ability to open up gives the women license to do the same. Solomon plays Dory as a spitfire of energy, and a hint of slyness that makes her character seem to have a sinister trick up her sleeve, which is about to blow at any minute.

Foster’s play presents a few obstacles for any production, and there are a few Pigs has to encounter and overcome. There’s Empire’s small level stage area, which needs to double as an 18-hole golf course. Good golfer or not, the audience must apply the suspension of disbelief here, since the space restricts a hearty swing.

There’s also Foster’s efforts to have secrets revealed as the women play every single hole, all 18 of them.  As they make their way around the course, the stakes get higher and the revelations go deeper. Here’s the formula: There’s the set up on the green, the drive, character conversation, which includes jokes, perhaps a revelation, then chip and putt, move on to the next hole. There’s discussions on sex, men, marriage, kids, alcoholism, religion, immortality. Foster does have a knack for humor on each subject. For example, “God’s a man,” Connie says decidedly. “The Bible says He rested on the seventh day. A woman wouldn’t rest on the seventh day. She’d say ‘I need to reorganize that closet.’ ”

All of this could have been covered in nine holes. Good for us that the director wants everything to move at a clip, and from the first tee off those women have to keep things moving. You can see that there’s a desire to immerse the audience to never let up on getting us deep into the world and souls of these women. Crowd reaction of laughs and nods are telltale signs that this works. In fact, a group of women who had never been to Empire Stage or seen a Pigs Do Fly Production decided to have a girls’ night out for their golf league after reading the synopsis of the play online. At intermission, they were discussing the similarities between their days on the links and The Ladies Foursome.

Like the game itself it, there are successful shots and there are bunkers, many due to Foster’s characterizations of women, which ring like they are from a man’s point of view. Plus, Foster’s ending undermines his play. Dory’s trick isn’t humorously sinister, which one might expect, but the task she’s given to reveal the deceased friends deep, dark secret. It leaves this comedy on a downer and usurps the comic levity that’s set the tone throughout.

Others are the nips and tucks needed to make the comedy a bit tighter, and the ensemble more cohesive. It is a product of the short amount of time they’ve had to work together, and these shortfalls should gain momentum the more it’s performed to an audience.  (A little detail about this production that is oodles of fun is that each wallop of the ball is accompanied by the requisite sound, thanks to David Hart’s sound design and Oscar Rodriguez’s stage managing.)

Don’t pay attention to how the clubs are gripped, or if No. 1 looks the same as No. 18. This is a piece not about golf, but about the course our lives take, our friendships and choices, and how we select each of them. There’s an understanding of that in this production, and this is where it hits a hole in one.