‘Curious Incident’ Brings You Inside The World of Autism 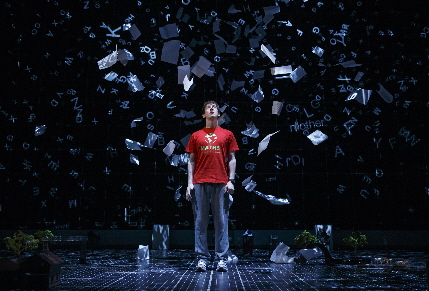 Sometimes stage theatricality more effectively thrusts you inside the head of someone completely alien to your own experience than the hyper-reality of a film is able to convey.

A prime example is The Curious Incident of the Dog in the Nighttime which is touring the United States (a play touring, who ever heard of such an idea?) and currently in the middle of a criminally short run at the Kravis Center ending Sunday.

The premise charts tumultuous months in the life of Christopher, an autistic 15-year-old who cannot stand to be touched, is incapable of telling a lie, is cripplingly literal-minded, cannot function in the outside world and who has a savant’s bent for mathematics.

Set in his provincial working class English town, the tale starts off as a mystery with the boy trying to determine who gruesomely murdered a neighborhood dog. But his investigation forbidden by his single father and the desire to find his missing mother send him into the wilds of urban London.

The point, though, is that like the 2003 best-selling novel by Mark Haddon, the play by Simon Stephens tells the story from inside Christopher’s mind. We see what he sees, hear what he hears. As with many autistic people, what he sees and hears in times of stress is a blinding and deafening sensory overload; one of the symptoms of autism is an inability to filter out the avalanche of sensations around us at any moment.

But the deft playwright often presents people and situations that Christopher cannot comprehend or is misinterpreting which we in the audience perfectly understand, underscoring the tragic disconnect between Christopher and the world around him.

Oddly, though the script has some flaws – it runs too long to begin with –t he production, directed by Marianne Elliott leading a stunningly talented crew of designers, delivers an aural and visual experience that defines the word spectacular.

An ensemble playing many roles and working with nothing but props and some internally lit boxes perform in a stage-high black box lined with what looks like green-on-black graph paper. Upon this we see a stunning array of projections such as a cascade of equations; tiny lights plot geometric projections on the wall; images explode in blinding pyrotechnics.  Endlessly inventive visions are augmented with similarly disorienting cacophonies that make the audience flinch much as Christopher does.

The journey and inquiry are not enthralling in themselves; the intriguing facet is that everything is told from the viewpoint of someone who only sees situations in black-and-white and who has no comprehension of social conventions — about as unreliable a narrator as can be imagined. For the general public unaware of what high-functioning Asperger’s Syndrome does to a person’s observations and how it affects their behavior (an almost physical aversion to some colors, for instance), Christopher’s tale is like a modern-day trip down the rabbit hole. Things that are familiar like the subway are a terrifying experience; the subtle sophisticated nuances of relations between men and women are opaquely undecipherable.

Much of this is communicated visually by the highly stylized production with choreography by Scott Graham and Steven Hoggett. Most memorable is Bunny Christie’s set design with lighting by Paul Constable, sound by Ian Dickson and videos by Finn Ross. For instance, as Christopher thinks out loud, the walls reflect the intricate thoughts racing through his brain as he struggles with perpetual anxiety.

Those familiar with the novel will realize that the play is thankfully missing the hero’s internal obsession with the intricate dance of numerals and equations – a mind-numbing facet of the book that you have to skip over like names in a Russian novel. If you miss that aspect, the actor playing Christopher follows the cast’s curtain call with a rapid fire recitation of Christopher’s Byzantine solution to a complex algebraic puzzle. But what is intact are Christopher’s funny and frustrating misperceptions of a world that seems normal to us, but madness to him – and he makes you wonder if he hasn’t got the right call. We see what he sees as he sees it, but are able to recognize it for what it really is. So we get a guided tour of an alien country that is, in fact, our own.

This show isn’t likely to show up in a regional theater very soon because the technical aspects are really crucial to an audience’s appreciation. But this touring cast commits to the complex staging as they double as narrators and stand-ins for a score of people whom Christopher meets on his travels.

Obviously, the linchpin is whoever is playing Christopher who must make him someone to root for, which Christopher makes difficult because of his inherently unyielding inability to feel compassion or empathy for anyone else. So credit goes to actors Adam Langdon and Benjamin Wheelwright who switch off the role because it’s too exhausting to perform twice a day.

Note: When the show played on Broadway, it was in a much more intimate house. If you sit more than two-thirds of the way back in the Kravis Center, you won’t be able to see the actors’ faces emoting very well, often because the lighting is sometimes dim and atmospheric.

Full disclosure: I have a brother who is coping with a similar if less severe strain of the malady. Because I have seen this first hand most of my life, I admit the play did not touch me emotionally or stimulate my mind as completely as it has many patrons who are enraptured.

The Curious Incident of the Dog in the Nighttime through Sunday at the Kravis Center for the Performing Arts, 701 Okeechobee Boulevard, West Palm Beach. Running time: 2 hours 30 minutes including one intermission. Performances are 8 p.m. Thursday-Saturday; 2 p.m. Saturday and Sunday. Tickets are $27– $84.  For more information, call (561) 832-7469 or visit kravis.org.

This entry was posted in Performances, Reviews and tagged Kravis Center, The Curious Incident of the Dog in the Night-time. Bookmark the permalink.