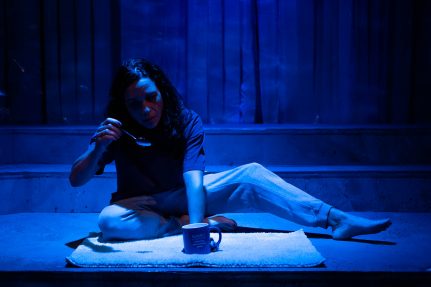 There’s an old joke that asks, “How do porcupines make love?” The punchline: “Carefully.”

How do human beings, each in their own extreme pain and distress, then provide compassion and support for each other when such connections risk even more pain alongside the possibility of resurrection? The punchline: Very carefully.

But the glory of the species is that they do, as testified to in Quiara Alegriá Hudes’ Water by the Spoonful, receiving a strong, ultimately moving production from New City Players.

Director Elizabeth Price has molded solid performances from a cast with a wide range of experience, from fresh out of school to a lengthy resume.

It’s once again difficult to detail much of the narrative arc without giving away the secrets that are exposed as layer upon layer of self-deception, misperceptions and outright lies are ripped away.

But the initial set up: Elliot Ortiz (Alex Joyel) is six years back from a tour as a Marine in Iraq with a leg wound and lingering PTSD. But the lasting damages are the nightmarish visions of a ghost of an Iraqi man from a situation not explained until the final minutes. He’s a wannabee actor with one commercial to his credit, but is now making hoagies at a Subway in Philadelphia and spending a great deal of time nursing the dying aunt who raised him.

In scenes alternating with those of the Ortiz family, we meet a quartet of self-described crackheads trying to help each other’s trek of recovery in an online chat room support group notable for diverse quirky personalities and sharp repartee.

There’s the seemingly solid moderator logged on as “Haikumom” (Arlette del Toro) who has been clean for years, but clearly concerned about a relapse. 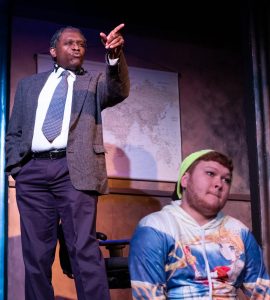 Late to the group is “Fountainhead” (Christopher Dreeson), a classic family man recently laid off from his $300,000 a year job as a computer entrepreneur and deeply in denial. He refuses to tell his wife of his problem so long as he can continue to drive his Porsche from his Main Line Philly home. “I want to stay in the driver’s seat,” he says.

Their commonality, besides substance abuse, is profound loneliness resulting from the fallout of that addiction and the result of tragically damaged family relationships. These online sessions provide the closest thing they have to an extended family. But each’s arc of recovery is as varied as it is tentative. “Staying clean is like tap dancing on a minefield,” one says.

It takes most of the first act before Hudes grants us the most palpable connection between the two groups, and even deeper into the second act before this critic grasped the thematic connection. But Price and the actors keep the audience engaged throughout.

Price subtly stages the stage movement and insists the actors dig deep into their characters, from their angst to their gallows humor.

A couple of key pieces of information near the end that fully explains one of the backstories are not enunciated clearly, so it’s important to pay special attention.

Every actor invests themselves fearlessly into these characters. Amazingly, this is Joyel’s professional debut as the ex-Marine clearly haunted by several aspects of his past and whose pain drives him to rage. Once again this season, we discover a growing cadre of talented promising young artists in South Florida such as Joyel and Gabriell Salgado (seen in The Code running next door) that many of us have never heard of before.

But special praise is due del Toro (the devoted mother in New City Players’ 2019 Failing) as the life-worn caring mother in this den, with a face that melds sadness and compassion, while not allowing the lies.

And especially kudos are due Dreeson who finally gets a part that he nails perfectly from the self-centered self-satisfied self-deception denial through a convincing evolution.

Fawad Siddiqui plays a professor who provides a crucial clue and a mystery.

Hudes’ script won the 2012 Pulitzer Prize for Drama as the second play in a trilogy rooted in Elliot’s life. She also wrote the original stage book for In The Heights and later the screenplay for the film version.

Desiraé Merritt’s lighting helps the myriad changes of scene as well as some subtle intensifying of the lights that subconsciously makes a point.

Also, praise to sound designer Ernesto Gonzalez who chose the perfectly selected jazz numbers that play during scene changes and reflect the emotions of the play.

Watching haunted damaged people struggle together for redemption and a separate peace whether its battling addiction or coming to terms with damaged relationships makes for affecting drama in this company’s equally risky undertaking.

New City Players, whose leadership invests deeper into community connection than most troupes, preceded the run and will end the run with forums about addiction, and provides contacts in lobby flyers with organizations that provide help. It has partnered with 211.org which provides confidential advice on resources.

Note: The company formerly based at The Vanguard in Fort Lauderdale is now operating in Wilton Manors at the home of Island City Stage.

Water by the Spoonful runs through May 15 from New City players performing at Island City Stage’s Wilton Theatre Factory, 2304 N. Dixie Highway, Wilton Manors. The running time is 2 hours 15 minutes including one intermission. 8 p.m. Thursday, Friday and Saturday; 3 p.m. Saturday and Sunday. Tickets are $40 for adults, $35 for seniors (65+), and $25 for students (under 25 with ID). Tickets can be purchased at www.newcityplayers.org/season or by calling (954)-376-6114.

Covid Protocol: Masks are recommended, but not required nor proof of vaccination.

Notes:  For helpful tips about directions, parking, arrival time, etc., please visit the Island City Contact Page at http://www.islandcitystage.org/contact/ .  Do not park in the retail spaces directly across from the theater.  They may tow your car. 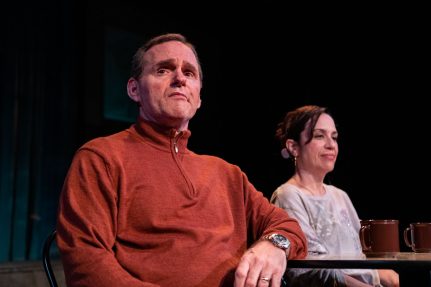