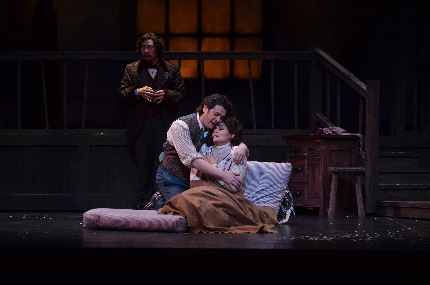 How will this scene end in Florida Grand Opera’s La boheme? Scotto di Luzio and Adrienn Miksch pledge their love./ Photo by

The audience at the opening night of Florida Grand Opera’s La bohème at the Adrienne Arsht Center Friday was what opera company’s hope they can draw. It wasn’t just the loyalists of the art of opera, an older demographic, whose numbers are declining (it’s not breaking news that younger people aren’t buying tickets and filling seats of classical performances, i.e. ballet, classical music concerts, and opera). It was a lively mix of those dedicated operagoers and some newbies drawn to La bohème for more modern reasons.

Giacomo Puccini’s La bohème, written in 1895, has always been a guaranteed fan favorite. According to Operabase, which claims to be the world’s greatest organizer of data relating to the world of opera, cited the work as the fourth most performed opera worldwide in the season of 2015-2016 when they last compiled statistics. Just that year 3,131 performances of bohème were staged around the globe.

Operasense has a point when it says: “If there were an opera that non-operagoers had heard of, it would be bohème.” No doubt, from the conversations overheard during each of the two intermissions of Friday night’s performance, some of the interest in the 100-year-old opera comes from the late Jonathan Larson’s musical, Rent, which opened off-Broadway in 1996 and is loosely based on Puccini’s opera. It’s widely touted as such.

A couple sitting behind me – it was the gentleman’s first opera, his female companion said she had been to the opera, but didn’t go much because her boyfriend didn’t like it – were comparing characters and plot points to Larson’s Rent, which made its premiere off-Broadway 100 years to the date after the first performance of La bohème thrilled audiences in Turin, Italy.

Yes, you will, of course, find the same themes and characters: struggling artists, boy meets girl and falling in love quickly (really quickly), friendship, death before one’s time, and especially how we all deal with this thing called life.

Yes, Larson’s Rent drew some newbies to FGO, but this presentation of La bohème was authentically true to Puccini’s original right down to the pink bonnet.

There are so many wonderful things to be excited about with this production. The sets (Michael Yeargan), the moody, yet when needed to be lively, lighting (Stevie Agnew) and the bevy of costumes, wigs and makeup credited to designers Howard Tsvi Kaplan, the late Walter Mahoney, and Sue Schaefer.

Put all that aside and strip it bare, and this would still stand because of the incredible matchups of the performers. Puccini’s four acts provide plenty of scenes that call for pairings, and in the hands of these professionals, it added a definite layer of interest to watch singers who could equal each other in their vocal strengths and acting abilities, while never trying to outdo one another. This was ensemble playing at its finest.

The jovial camaraderie of the four struggling artists clowning around in the Paris flat early in Act 1: Rodolfo, the writer/poet (Allesandro Scotto di Luzio), Marcello, the painter, his best friend and roomie (Trevor Scheunemann), and their pals musician Schaunard (Benjamin Dickerson) and philosopher and bookworm Colline (Simon Dyer).

And then the meeting of Rodolfo and Mimi soon after. She is a neighbor whose candle has gone out, and is seeking a light. Her knock on the door begins a fateful romance. They immediately have a spark. Scotto di Luzio and Adrienn Miksch’s Mimi find their flame together. The scene in which the pair fall in love (they say “I love you” only minutes after meeting, and elicits subdued laughter from an audience when it happens) is one of the most famous, and when done with perfection leaves the crowd mesmerized. There was no disappointing here.

Scotto di Luzio’s aria “Che gelida manina” (What a cold little hand”) found the tenor in fine voice. Making his FGO debut, but with credits from operas in Italy, perhaps his comfortability with the language made his Rodolfo all the more genuine. Bravos and cheers for his interpretation. As the applause subsided soprano Adrienn Mikesch embodied Mimi’s aria “Si, mi chiamano Mimi (Yes, they call me Mimi) with a naivete that gave the character a quaint warmth and honesty, and which carried through the entire performance.

The two arias showed the magic of Puccini’s music, and credit to all involved for taking such care with the beauty of it. A brief pause as the curtain came down as the lovers left the flat had ushers at the Arsht telling patrons who began to leave their seats, “this is just a brief pause” (it also said so above on the supertitles).

When the three to five minutes were up and the curtain rose, an entire new world had arrived on stage. Surprised, the crowd applauded the glorious look of a stage filled with people and the Paris flat now replaced by a rousing Café Momus, and  a Latin Quarter street with children, village people and sellers hawking their goods.

The cacophony from the street spilled into the Café, and this is where the fun began, and always does. Here we meet Musetta, the seductive enchantress, who is previously lovers with Marcello, and now arrives on the arm of a sugar daddy (Tony Dillon plays dual roles; he’s the landlord in Act 1 as Benoit and Alcindoro here). She sings her “Musetta’s Waltz” to show her charms and make Marcello jealous. It is a comic highlight. This part calls for a boldness of the singer in Act II, but by Act IV, Musetta needs to show her empathetic side. Jessica E. Jones was able to find the requisite balance, and with ease.

And that music that flows throughout from the levity of the waltz to the orchestral colors of so much of the score. It’s always exciting to have a seat where you can see FGO’s conductor Ramon Tebar when he’s so engrossed in such a score, bringing out Puccini’s bright and beautiful romanticism. Tebar was, no doubt, inspired by the history of the then 28-year-old Arturo Toscanini conducting the premiere in Turin at Teatro Regio on Feb. 1, 1896.

There are some nuanced moments that should be noticed since they add such detail to the production. In Act IV, Scheunemann is upstage as Marcello preparing the cordial they have fetched to help calm Mimi’s cough. Watch as the preparation is so true to detail as director Jeffrey Marc Buchman has Marcello mixing the concoction in many steps – pour the liquid, heat it over a candle, and prepare it with care.

This is the perfection of this La bohème, to make every minute count, and FGO’s dedication to stay true to the Puccini original. And, those Rent fans? They surely will leave the theater with a better understanding of why Larson was so inspired.