FGO’s Vibrant Surreal Frida Is Not Your Everyday Grand Opera 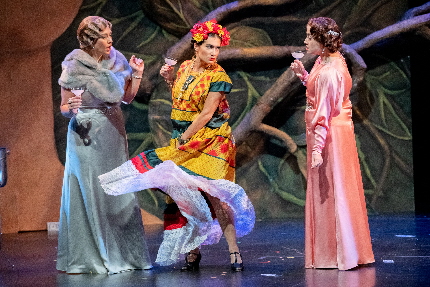 Expectations: It’s crucial that regular patrons know that Frida is unlike almost any other work previously offered by Florida Grand Opera.

This biography of the iconic Mexican painter Frida Kahlo is, indeed, an opera, but it encompasses, among other things, the sounds and tropes of musical theater. The music’s base is contemporary opera, but it includes riffs of mariachi horns, Latin percussive rhythms, strummed Mexican folk music, 1930s Manhattan jazz and another half-dozen genres. There is swirling Mexican folk dancing and an expressionistic ballet. The staging is pointedly surreal: three Day of the Dead dancers wearing skull masks weave through the entire story. Because the opera contains considerable spoken dialogue and the venues for this show are smaller, the orchestra is toned down and microphones are in use by performers. It’s not being mounted at the Arsht or Broward Center. Oh, and there’s a bathtub scene in which the lovely diva is partially nude.

None of this should deter anyone; just don’t go expecting Rigoletto. This is as stylistically surreal and non-conforming as its heroine.

The 1991 score by Robert Xavier Rodriguez can be melodically romantic, explosively bombastic and unnervingly dissonant. Migdalia Cruz’s lyrics — mostly in English but liberally sprinkled with Spanish exclamations– are not very subtle. Hilary Belcher’s script dumps on the exposition and her dialogue resembles nothing you’d find in a straight play. The verbiage can be a little rougher, too, than La boheme. One woman says, “I could tear your little tits off with my teeth.”

But the three celebrate Kahlo’s array of ethos, such as insisting that art should be for the common man and that death is inevitable so we should savor life.

The warring genres may not quite coalesce into a whole, but the overall result is a fascinating experience for audiences willing to loosen their definitions and be open to broadening their artistic horizons.

It helps immeasurably that Kahlo herself is such an engaging subject, a revolutionary in her artistic style, her politics, her personal relationships and in her independence as a female artist in a male-dominated society. Her scores of self-portraits, often set in a fantastical world and featuring her native dress, were of some limited success before her death in 1954, but she began being recognized in the 1980s as one of the most significant painters of the 20th Century.

The role obviously requires, and is blessed here, with the talent and skill of the Colombian-born Miami-based soprano Catalina Cuervo who has the innate charisma to carry a mildly intriguing production.

This is her third run at the part and her comfort enabled her to outshine every other aspect of the production other than the small nimble orchestra.

Among her accomplishments is switching within a single line of music from a low contralto to a soaring soprano. But far more impressive is how she has conquered  Rodriguez’s artistically valid and metaphorical choice of having Frida often sing off the beat of what the orchestra is playing, sometimes singing notes and musical lines at odds with the underlying music.

Cuervo exudes a vibrance in everything from her singing to her movements, down to a proud jutting chin. She does the real Frida proud such as when facing down capitalist Henry Ford at a New York City society event, she asks, “Is it true you don’t like Jews?”

Cuervo and Frida’s partner through the evening is Texas baritone-bass Ricardo Herrera in his FGO debut, putting on a fat suit to play Frida’s husband, the great muralist Diego Rivera. Having played their roles together before, there is an adequate amount of chemistry although, as in real life, they never seem fated to be together.

Other than Curevo, the acting of the cast is consistently over the top with director-choreographer Marco Pelle more interested in the proceeding being stylish than credible. It may be the collision of genres. When people sing such florid sentiments in Italian or French, you don’t notice the overwrought delivery. But when they sing in English, the histrionics seem jarringly false, even though the entire production is meant to be theatrically surrealistic.

The bulk of the libretto is in English with Spanish supertitles projected (although other than Curevo’s clear diction, it’s a help that most of the English lyrics from other performers are also projected in English.)

Roberto Kalb conducted an orchestra smaller than what a musical would use on Broadway. But it navigated easily around the diverse musical styles as the score ricocheted among swelling, crashing and then quiet contemplation. Credit is due Accordian: Stas Venglevski; Piano: Paul Schwartz; Violin: Scott Flavin; Viola: Alfredo Oliva; Cello: Claudio Jaffe; Bass:  Juan Carlos Pena; Guitar: Alvaro Bermudez; Clarinet/Sax: Julian Santacoma; Trumpet:  Doug Michels; Trombone: Domingo Pagliuca, and Percussion: Mark Schubert. That selection of instruments gives a sense of the flavor of the score.

The set, rented from the Michigan Grand Opera which featured Cuervo in an earlier outing, is minimalist (easy to move among three South Florida venues) comprised mostly of some sections of Frida’s painting, a screen to project other paintings, and a mostly bare tree trunk running horizontally across the stage jutting out of huge anatomically heart. Minika Essen’s costumes, especially Frida’s colorful native garb copied from her paintings, are impressive.

The selection of Frida is yet another step by FGO under General Director and CEO Susan Danis in a campaign to attract a broader audience and to expand the scope of its fare. On opening night at the Miramar Cultural Center, the crowd was noticeably younger, more diverse and less gown-and-tux. That may have been the inherent appeal of the subject matter, the location or the free parking, but it was the audience that FGO has been trying to attract.

(Note: While there is no pre-performance lecture from Justin Moss, director of Broward Operations and Outreach. But he has recorded a half-hour version on You Tube at  https://www.youtube.com/watch?v=isu01mlnLTU&t=85s )

Frida plays March 16-30 with a different schedule of venues than usual: Miramar Cultural Center, 2400 Civic Center Place, March 16 at 7:30 p.m. and March 17 at 3 p.m.; Parker Playhouse, 707 NE 8th Street, Fort Lauderdale, March 28 and 30 at 7:30 p.m.; and Miami-Dade County Auditorium, 2901 West Flagler Street, on March 21 at 8 p.m., March 23 at 7 p.m. and March 24 at 3 p.m. Tickets are $35-$99. They can be purchased in person at the Florida Grand Opera Box Office at the Doral Center at 8390 NW 25th Street, online at www.FGO.org, by phone at 1.800.741.1010, or email at Sales@FGO.org. Tickets can also be purchased through the venue box offices onsite and online at the Miramar Cultural Center at www.MiramarCulturalCenter.org, Miami-Dade County Auditorium at www.MiamiDadeCountyAuditorium.org, Parker Playhouse at www.ParkerPlayhouse.com, and on www.Ticketmaster.com. Show is 2 ½ hours with one intermission.