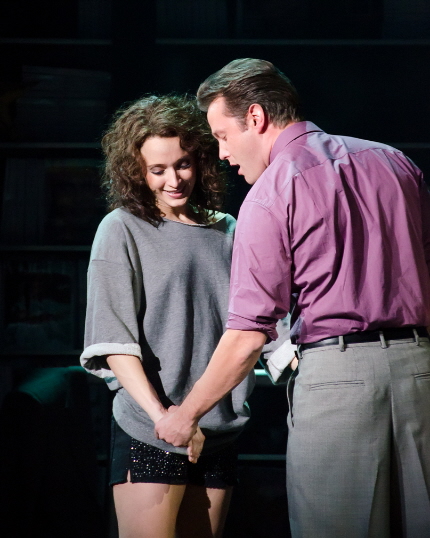 With hardbodies gyrating in knife-sharp choreography to infectious music, Flashdance The Musical is a happy surprise in which undeniable skill, energy and talent trump material about as subtle as sledgehammers bashing steel plates into shape.

You’re not likely to get emotionally engaged by this pre-New York shakedown appearing at Broward Center, but you’ll have to admire the polish and propulsion of director/choreographer Sergio Trujillo’s very Broadway-style reimagining of the 1983 film.

Certainly, where the themes of female self-empowerment and following your dreams seemed organic and genuine in Adrian Lyne’s film, here they feel schematic and manipulative—which can be said for much of the production.  But other than abysmal lyrics, Flashdance is a carefully-crafted and mildly satisfying evening.

Above all, the experienced Broadway hand Trujillo (Memphis and Jersey Boys) drives the entire cinematic evening with first-rate kinetic choreography echoing the 1980s, to the point of peppering it with breakdancing and moonwalking. He even quotes Jeffrey Hornaday’s thrilling fist-pumping choreography from the film for the heroine Alex’s audition for a dance conservatory at the climax.

He’s also hired an outstanding corps of singer-dancers to crisply execute his vision, starting with the lovely Emily Padgett as Alex, a tough but winsome performer whose warm smile and strong Laura Branigan voice are almost eclipsed by the joyful passion she exhibits whipping her limbs around stage with abandon.

Trujillo is smart enough to reference iconic memories from the film without slavishly adhering to it. For instance, Alex has Jennifer Beals’ shoulder-length mop of brunette curls, she does wear that cutaway black workout outfit and later the off-the shoulder sweatshirt (but no legwarmers). The first act curtain comes down on the famed silhouetted image of Alex arched backward over a chair with “water” from a showerhead “soaking her. (Actually, there is no moisture, just smoke and bright backlighting.)

Trujillo and company impart a flowing energy and style that never flags, starting with the lengthy opening production number that clearly sets up most of the exposition through wordless dance. The producers have not skimped on the production values to achieve that fluidity, using stage-high sliding set pieces, ever-morphing lights and especially ingenious uses of vivid projections.

The script parallels the film’s plot, since both are co-written by Tom Hedley, this time with Robert Cary. It’s a blue-collar Cinderella tale in which Cindy pretty much rescues herself rather than look to Prince Charming for help.

Alex is a young woman who makes her living as a welder in a dying steel mill in Pittsburgh. But her real love is performing uninhibited dirty dancing on the stage of a downtown nightclub alongside her buddies, the sweet-natured Madonna wannabe Gloria (Kelly Felthous), the quick-with-a-quip Kiki (DeQuina Moore) and the ferally sexy Tess (Rachelle Rak.)

Alex dreams of becoming a professional dancer with an idiosyncratic style resembling an athletic riff on Martha Graham and Alvin Ailey. But a crippling home life robbed her of the self-confidence to audition at the local academy despite the encouragement of a lifelong mentor. Her life is upended when Nick (Matthew Hydzik), the hunky grandson of the mill owner, hangs out on the shop floor to get familiar with the operation as the front office considers massive personnel cuts. Despite Alex’s crippling reverse snobbery, romance blossoms until Nick’s well-intentioned efforts to help Alex get an audition seems to question her self-reliance. Alex has to decide whether to pursue her dream and still maintain a relationship with Nick.

This scenario rings tinnier on stage than in the movie, even though Hedley and Cary have tinkered with the meat of it. This version leans heavily on the resonating issue of a collapsing economy and threatened layoffs, as well as Nick’s moral quandary whether to be a hatchet man. The emphasis works, but it feels pulled from a script-writing textbook, just like the placing and character of many of the musical numbers. Also, the romance between Gloria and a nerdy would-be comic has been jacked up to the classic Broadway trope of a comic romantic subplot.

But even people who have not seen the movie will easily follow the plot, unlike the miserable mess of movie-to-stage librettos like the disastrous Saturday Night Fever. As required in the Bible of Musical Comedy Volume 3, the secondary characters all get dozens and dozens of Broadway wisecracks to utter; fortunately Moore and Rax snap them out with a sardonic topspin that makes even the lamer jokes worth a chuckle.

Most of the original music among the 27 numbers are by Robbie Roth (no, you’ve never heard of him). They are the generic run of competent ballads and powerbar anthems that sound as if they came from a 1980s jukebox or were rejects from Rock of Ages. Oddly, the Playbill doesn’t credit the writers of the songs lifted from the movie soundtrack such as Maniac and What A Feeling. But most of those numbers are accompaniment to the dancers’ performances in the club such as Rak’s scorching solo to “I Love Rock and Roll” and Moore’s even hotter “Manhunt.” Both women are equally fine singers, as is Hydzik who doesn’t have to dance much, just look good.

The single worst element is the lyrics by Cary and Roth. They aren’t simply cliché-ridden; they’re nothing but an unending procession of clichés. They flatten and cheapen the legitimate emotions by making them feel like the creators are punching the audience’s buttons. Even the rhythm of some words don’t sit cleanly on the notes. Sondheim, this ain’t. Maybe Wilbur Sondheim.

For all that feeling like your strings are being pulled by puppeteers, Flashdance remains an energizing diversion of Broadway entertainment… even when there’s no water in the pipes. 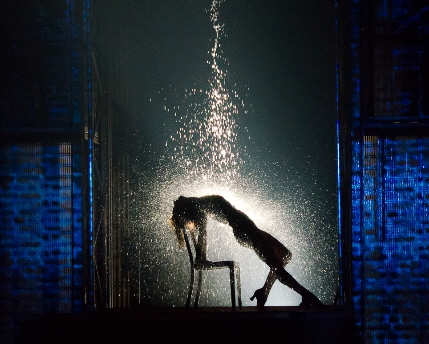 This publicity shot shows water falling in an echo of the iconic movie still, but there wasn’t a drop opening night, just deft stagecraft making you think there was.